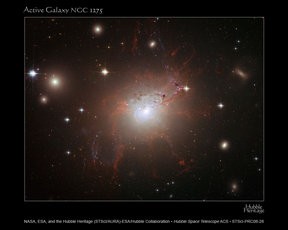 This Hubble Space Telescope image of galaxy NGC 1275 reveals the fine, thread-like filamentary structures in the gas surrounding the galaxy. The red filaments are composed of cool gas being suspended by a magnetic field, and are surrounded by the 100-million-degree Fahrenheit hot gas in the center of the Perseus galaxy cluster. The filaments are dramatic markers of the feedback process through which energy is transferred from the central massive black hole to the surrounding gas. The filaments originate when cool gas is transported from the center of the galaxy by radio bubbles that rise in the hot interstellar gas. At a distance of 230 million light-years, NGC 1275 is one of the closest giant elliptical galaxies and lies at the center of the Perseus cluster of galaxies. The galaxy was photographed in July and August 2006 with the Advanced Camera for Surveys in three color filters.

Newswise — NASA's Hubble Space Telescope has found an answer to a long-standing puzzle by resolving giant but delicate filaments shaped by a strong magnetic field around the active galaxy NGC 1275. It is the most striking example of the influence of the immense tentacles of extragalactic magnetic fields, say researchers.

One of the closest giant elliptical galaxies, NGC 1275 hosts a supermassive black hole. Energetic activity of gas swirling near the black hole blows bubbles of material into the surrounding galaxy cluster. Long gaseous filaments stretch out beyond the galaxy, into the multimillion-degree, X-ray"emitting gas that fills the cluster.

These filaments are the only visible-light manifestation of the intricate relationship between the central black hole and the surrounding cluster gas. They provide important clues about how giant black holes affect their surrounding environment.

Exploiting Hubble's view, a team of astronomers led by Andy Fabian from the University of Cambridge, UK, have for the first time resolved individual threads of gas that make up the filaments. The amount of gas contained in a typical thread is round one million times the mass of our own Sun. They are only 200 light-years wide, are often very straight, and extend for up to 20,000 light-years. The filaments are formed when cold gas from the core of the galaxy is dragged out in the wake of the rising bubbles blown by the black hole.

It has been a challenge for astronomers to understand how the delicate structures withstood the hostile, high-energy environment of the galaxy cluster for over 100 million years. They should have heated up, dispersed, and evaporated by now, or collapsed under their own gravity to form stars.

A new study published in the August 21 Nature magazine proposes that the magnetic fields hold the charged gas in place and resist the forces that would distort the filaments. This skeletal structure is strong enough to resist gravitational collapse.

"We can see that the magnetic fields are crucial for these complex filaments " both for their survival and for their integrity," said Fabian.

Similar networks of filaments are found around other more remote central cluster galaxies. However, they cannot be observed with comparable resolution to the view of NGC 1275. The team will apply the understanding of NGC 1275 to interpret observations of these more distant galaxies.

For images and more information about NGC 1275, visit: