Hubble Zooms In on Heart of Mystery Comet

Animation of Comet 17P/Holmes Dimming Over Time This animation is a composite of images taken by NASAâ€™s Hubble Space Telescope that reveal Comet Holmesâ€™s bright core. The images show that the coma, the cloud of dust and gas encircling the comet, is getting fainter over time. The coma was brightest in the Oct. 29 image. It is two times fainter on Oct. 31 and nine times dimmer on Nov. 4 than during the Oct. 29 observation. The coma is getting fainter because it is expanding. A huge number of small dust particles was created during the Oct. 23 outburst. Since then those particles have been moving away from the nucleus and filling interplanetary space. The coma therefore is becoming more diffuse over time. The nucleus, however, is still active and is producing a significant amount of new dust. So the region around the nucleus is still much brighter (at least 10 times brighter) than it usually is at this point in the cometâ€™s orbit. 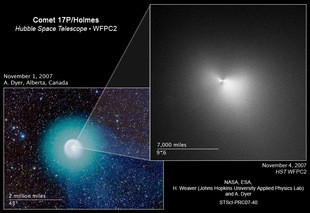 The Hubble image at right, taken Nov. 4 with the Wide Field Planetary Camera 2, shows the heart of the comet. The central portion of the image has been specially processed to highlight variations in the dust distribution near the nucleus. About twice as much dust lies along the east-west direction (the horizontal direction) as along the north-south direction (the vertical direction), giving the comet a "bow tie" appearance. The composite color image at left, taken Nov. 1 by astrophotographer Alan Dyer, shows the complex structure of the entire coma, consisting of concentric shells of dust and a faint tail emanating from the comet's right side. The observations were made in southern Alberta, Canada with a 105mm apochromatic refractor at f/5 with a Canon 20Da camera at ISO400. Field is about 2.5 x 1.5 degrees.

Newswise — NASA's Hubble Space Telescope has probed the bright core of Comet 17P/Holmes, which, to the delight of sky watchers, mysteriously brightened by nearly a millionfold in a 24-hour period beginning Oct. 23, 2007.

Astronomers used Hubble's powerful resolution to study Comet Holmes' core for clues about how the comet brightened. The orbiting observatory's Wide Field Planetary Camera 2 (WFPC2) monitored the comet for several days, snapping images on Oct. 29, Oct. 31, and Nov. 4. Hubble's crisp "eye" can see objects as small as 33 miles (54 kilometers) across, providing the sharpest view yet of the source of the spectacular brightening.

The Hubble image at right, taken Nov. 4, shows the heart of the comet. The central portion of the image has been specially processed to highlight variations in the dust distribution near the nucleus. About twice as much dust lies along the east-west direction (the horizontal direction) as along the north-south direction (the vertical direction), giving the comet a "bow tie" appearance.

The composite color image at left, taken Nov. 1 by an amateur astronomer, shows the complex structure of the entire coma, consisting of concentric shells of dust and a faint tail emanating from the comet's right side.

The nucleus-the small solid body that is the ultimate source of all the comet's activity-is still swaddled in bright dust, even 12 days after the spectacular outburst. Most of what Hubble sees is sunlight scattered from microscopic particles," explained Hal Weaver of The Johns Hopkins University Applied Physics Laboratory in Laurel, Md., who led the Hubble investigation. "But we may finally be starting to detect the emergence of the nucleus itself in this final Hubble image."

Hubble first observed Comet 17P/Holmes on June 15, 1999, when there was virtually no dusty shroud around the nucleus. Although Hubble cannot resolve the nucleus, astronomers inferred its size by measuring its brightness. Astronomers deduced that the nucleus' diameter was approximately 2.1 miles (3.4 kilometers), about the length of New York City's Central Park. They hope to use the new Hubble images to determine the size of the comet's nucleus to see how much of it was blasted away during the outburst.

Hubble's two earlier snapshots of Comet Holmes also showed some interesting features. On Oct. 29, the telescope spied three "spurs" of dust emanating from the nucleus, while the Hubble images taken on Oct. 31 revealed an outburst of dust just west of the nucleus.

The Hubble images, however, do not show any large fragments near the nucleus of Comet Holmes, unlike the case of Comet 73P/Schwassmann-Wachmann 3 (SW3). In the spring of 2006 Hubble observations revealed a multitude of "mini-comets" ejected by SW3 after the comet increased dramatically in brightness.

Ground-based images of Comet Holmes show a large, spherically symmetrical cloud of dust that is offset from the nucleus, suggesting that a large fragment broke off and subsequently disintegrated into tiny dust particles after moving away from the main nucleus.

Unfortunately, the huge amount of dust near the comet's nucleus and the comet's relatively large distance from Earth (149 million miles, or 1.6 astronomical units, for Holmes versus 9 million, or 0.1 astronomical unit for SW3), make detecting fragments near Holmes nearly impossible right now, unless the fragments are nearly as large as the nucleus itself.

For images and more information about Comet 17P/Holmes, visit:

The Hubble Space Telescope is a project of international cooperation between NASA and the European Space Agency. The Space Telescope Science Institute conducts Hubble science operations. The institute is operated for NASA by the Association of Universities for Research in Astronomy, Inc., Washington.

The Applied Physics Laboratory, a not-for-profit division of The Johns Hopkins University, meets critical national challenges through the innovative application of science and technology. For more information, visit http://www.jhuapl.edu .