Hunger Hormone Increases During Stress, May Have Antidepressant Effect 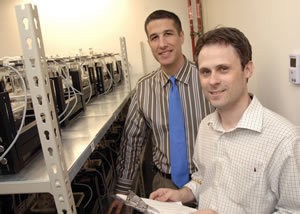 While levels of the so-called "hunger hormone" ghrelin are known to increase when a person doesn't eat, new findings by Drs. Jeffrey Zigman (left) and Michael Lutter suggest that the hormone might also help defend against symptoms of stress-induced depression and anxiety.

Newswise — New research at UT Southwestern Medical Center may explain why some people who are stressed or depressed overeat.

While levels of the so-called "hunger hormone" ghrelin are known to increase when a person doesn't eat, findings by UT Southwestern scientists suggest that the hormone might also help defend against symptoms of stress-induced depression and anxiety.

"Our findings in mice suggest that chronic stress causes ghrelin levels to go up and that behaviors associated with depression and anxiety decrease when ghrelin levels rise. An unfortunate side effect, however, is increased food intake and body weight," said Dr. Jeffrey Zigman, assistant professor of internal medicine and psychiatry at UT Southwestern and senior author of a study appearing online today and in a future print edition of Nature Neuroscience.

Dr. Michael Lutter, instructor of psychiatry at UT Southwestern and lead author of the study, said, "Our findings support the idea that these hunger hormones don't do just one thing; rather, they coordinate an entire behavioral response to stress and probably affect mood, stress and energy levels."

It is known that fasting causes ghrelin to be produced in the gastrointestinal tract, and that the hormone then plays a role in sending hunger signals to the brain. Research groups including Dr. Zigman's have suggested that blocking the body's response to ghrelin signals might be one way to help control weight by decreasing food intake and increasing energy expenditure.

"However, this new research suggests that if you block ghrelin signaling, you might actually increase anxiety and depression, which would be bad," Dr. Zigman said.

To determine how ghrelin affects mood, Dr. Zigman and his colleagues restricted the food intake of laboratory mice for 10 days. This caused their ghrelin levels to quadruple. As compared to the control mice, which were allowed free access to food, the calorie-restricted mice displayed decreased levels of anxiety and depression when subjected to mazes and other standard behavior tests for depression and anxiety.

In addition, mice genetically engineered to be unable to respond to ghrelin were also fed a restricted-calorie diet. Unlike their calorie-restricted wild-type counterparts, these mice did not experience the antidepressant-like or anti-anxiety-like effects.

To test whether ghrelin could regulate depressive symptoms brought on by chronic stress, the researchers subjected mice to daily bouts of social stress, using a standard laboratory technique that induces stress by exposing normal mice to very aggressive "bully" mice. Such animals have been shown to be good models for studying depression in humans.

The researchers stressed both wild-type mice and altered mice that were unable to respond to ghrelin. They found that after experiencing stress, both types of mice had significantly elevated levels of ghrelin that persisted at least four weeks after their last defeat encounter. The altered mice, however, displayed significantly greater social avoidance than their wild-type counterparts, indicating an exacerbation of depression-like symptoms. They also ate less than the wild-type mice.

Dr. Zigman said the findings make sense when considered from an evolutionary standpoint.

Until modern times, the one common human experience was securing enough food to prevent starvation. Our hunter-gatherer ancestors needed to be as calm and collected as possible when it was time to venture out in search of food, or risk becoming dinner themselves, Dr. Zigman said, adding that the anti-anxiety effects of hunger-induced ghrelin may have provided a survival advantage.

Dr. Lutter said the findings might be relevant in understanding conditions such as anorexia nervosa.

"We're very interested to see whether ghrelin treatment could help people with anorexia nervosa, with the idea being that in a certain population, calorie restriction and weight loss could have an antidepressant effect and could be reinforcing for this illness," Dr. Lutter said.

In future studies, the researchers hope to determine which area in the brain ghrelin may be acting on to cause these antidepressant-like effects.

The work was supported by the National Institutes of Health, the Foundation for Prader-Willi Research, the National Alliance for Research on Schizophrenia and Depression and the Disease-Oriented Clinical Scholars Program at UT Southwestern.