Image from Tornado May Lead to Precise Storm Warnings 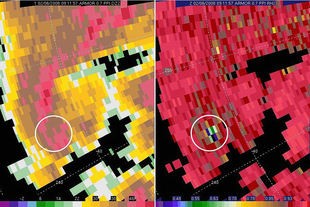 Radar images from the morning of Feb. 6 show the mesocyclone forming over Lawrence County, Ala., left, and the unexpected indication of debris jetted as much as two miles high, right. 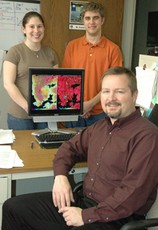 Dr. Walt Petersen, a research scientist at UAHuntsville (seated), and his severe storm-monitoring graduate students, Elise Johnson and Chris Schultz, and the radar images that showed the storm over Lawrence County and the debris picked up by a tornado.

Newswise — An unexpected radar image of airborne debris from the Feb. 6 tornado that killed four people in Lawrence County, Ala., might help scientists develop better tools for warning the public when and where strong tornadoes are on the ground.

Scientists in the Earth System Science Center at The University of Alabama in Huntsville (UAHuntsville) are studying radar data from the early morning tornado to see if the radar signature from the debris is so distinctive that computers can be programmed to instantly recognize it, so more timely and precise warnings might be issued.

"The real advantage would be the precision," said Dr. Walt Petersen, the UAH research scientist leading the radar data analysis. "These events are usually going to be associated with large scale mesocyclones, so tornado warnings would probably already have been issued. But those large scale rotation features can cover several miles.

"With this debris signal, we might be able to pinpoint the precise spot where a tornado is on the ground. It would be great to be able to say, 'The tornado is right there, at that town.' If you could automate a system to do that, it would be quite handy and useful."

Two of Petersen's UAH graduate students, Chris Schultz and Elise Johnson, used laptop computers to monitor the radar that morning from the safety of their temporary operations center -- the bathroom in Schultz' apartment, "in case we had to dive into the bathtub."

Later Schultz suggested to Petersen that there might be a debris signature associated with the Alabama storm.

This was the first time a significant tornado has hit within range of the advanced radar unit at the Huntsville International Airport since it was put in service in late 2004. Other storm-related debris sightings using similar radar technology at the National Severe Storms Laboratory in Norman Oklahoma have been rare, so every sighting adds substantially to the paltry information previously available.

ARMOR is a dual polarimetric radar, while most other weather radar units are single polarity. Dual polarization gives ARMOR the ability to gather more data about the size and shape of particles in the air. Initially it was thought the dual polarization capability would help scientists learn more about severe storms, identify hail or snow, and better estimate rainfall.

"This was totally serendipitous," said Dr. Larry Carey, an ESSC scientist working with Petersen. "Everything else we've done (with ARMOR) were things we pretty much expected. This wasn't really planned. It is just an added benefit of the technology."

If computers can be programmed to recognize debris in the radar data, that programming might be a standard feature when the National Weather Service upgrades its existing nationwide NEXRAD radar network to dual polarimetric capabilities beginning in 2009.

While the debris feature might not reduce the number of false tornado warnings, it could add a level of urgency and precision to warnings when tornadoes do occur, Petersen said.

ARMOR picked up the radar reflection of debris thrown as much as two miles into the air by the tornado. The funnel-shaped plume first shows up on the radar screen above the Pinhook community in Lawrence County, close to the time that the tornado was rated as very intense (EF-3 on the extended Fujita scale).

"There's nothing else we can come up with to explain this," Petersen said. "Things match up so well, this is not coincidence. We think our first impressions were correct, that this is indeed a debris signature."

In addition to improving warnings, the ARMOR data may provide other insights into how and why tornadoes form when and where they do. Preliminary radar data from the storm, for instance, shows an area of exceptionally heavy rain (at the rate of six to eight inches per hour) falling immediately behind where the tornado appeared.

The scientists wonder if vertical air movements associated with rainfall that heavy might contribute to shifting horizontal turbulence in the storm front into vertical rotation.

"Also, is it just coincidence that this tornado spun up as it came out of the Bankhead Forest over a slight down slope?" Carey asked. "There are so many factors involved - wind shear and rainfall and topography — it wouldn't surprise me if it takes a concurrence of all of them to spin up a significant tornado."

The data analysis and related work are supported by funding secured by U.S. Sen. Richard Shelby for the Tornado and Hurricane Observations and Research Center (THOR) test bed facility at UAHuntsville.