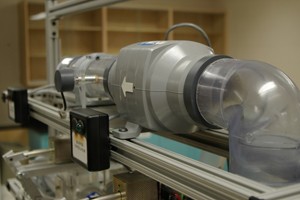 Newswise — Researchers at the University of Saskatchewan (U of S) have opened a new engineering lab to design a ventilation system that could protect schools, hospitals, and other public buildings from chemical warfare and bioterrorist attacks.

"Whether an emergency starts with a terrorist's biowarfare assault or a contagious disease seeping through a hospital's air ducts, time is of the essence," adds Kozinski. "This system promises to give citizens and emergency workers in these scenarios the extra seconds they need to respond before it's too late."

The Early Warning and Response system (eWAR) addresses what Kozinski views as major threats to public safety — the release of noxious chemicals and bio-agents into public buildings either accidentally through industrial spills or purposely through bioterrorist assaults that target ventilation systems. It could also address the threat of outbreaks by detecting diseases, such as chickenpox and tuberculosis, before they spread through a hospital's air vents.

The lab's research will help determine how eWAR can both filter harmful agents out of the air and activate warnings when airborne contaminants reach a critical density. In its current design, eWAR quickly notifies building residents about potential threats and conserves energy by only activating in times of potential crisis.

"We are expanding the scope of eWAR applications to cover a wider base of situations that may affect civilian populations, such as the spread of influenza, anthrax, or nerve agent sarin," says Andre Dascal, a McGill University associate professor of medicine, microbiology, and immunology collaborating on the project.

Once fully developed, eWAR is expected to fill a gap in the bio-defence marketplace, where maintaining bio-security in public buildings is not economically feasible using current technologies. An integrated eWAR system could make detecting the myriad chemicals and bio-agents part of normal security procedures, essentially creating "immune buildings."

"Shopping malls, government facilities, and commercial buildings are all waiting for a system like eWAR to give first responders enough time to evacuate people from public places before they are exposed to dangerous chemicals and biohazards," says Suzanne L. Lebel, Chairman of Alert B & C. "As partners in the eWAR project, we will use our TRAKERTM instruments to rapidly detect and identify harmful agents."

The eWAR project is a research consortium formed by the U of S, McGill University, Concordia University, the Biotechnology Research Institute, the Directorate of Public Health of Montreal, UV-Sterisource, and ALERT B & C.

Located in the heart of Saskatoon, the U of S is one of the leading medical doctoral universities in Canada. With 58 degrees, diplomas and certificates in over 100 areas of study, the University is uniquely positioned in the areas of human, animal and plant studies. World-class research facilities, renowned faculty and award-winning students make the U of S a leader in post-secondary education.