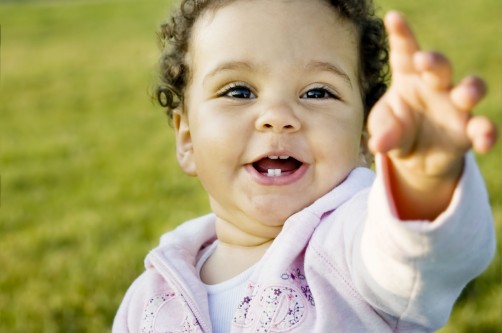 Research at the University of Chicago has found that children with brain lesions, areas of damaged tissue, demonstrate a relationship between their use of gesture and their language development. Children with language delays were low users of gestures at 18 months. An effective intervention for these children could be encouragement to use gesture earlier.

Newswise — Children with brain injuries may use gesture to signal they need help in developing language, research at the University of Chicago shows. The children who make the fewest gestures early in development also develop spoken vocabulary more slowly.

Researchers found that eight of the 11 children with brain injuries had vocabulary development below the 25th percentile at 18 months, but only five of the children still had delayed language development four months later.

“The striking result of our study is that these five children with language delays were the same five who were low gesture producers at 18 months,” said Susan Goldin-Meadow, the Beardsley Ruml Distinguished Service Professor in Psychology and an expert on gesture.

Goldin-Meadow is an author of the paper, “Early Gesture Predicts Language Delay in Children with Pre- or Perinatal Brain Lesions,” published in the March issue of Child Development, along with lead author Eve Sauer, a University researcher, and Susan Levine, the Stella M. Rowley Professor in Psychology.

The team studied 11 children from age 18 months to 30 months. All of the children had suffered brain injuries prenatally or during birth.

The children were observed in their homes three times a year for 90 minutes while they interacted with their primary caregivers in normal, everyday activities. Researchers tape-recorded the interactions, which included children’s gestures and their speech.

Although as a group the children with lesions produced as many gestures as the typically developing children, “there was a great deal of variability within the group of children with pre- and perinatal brain lesions,” Sauer said. Of the 11 children in the sample, five were found to be using many fewer gestures.

“At 18 months, it was not possible to reliably distinguish the two groups on the basis of their speech use, only their gesture use,” Levine said. The five children who used fewer gestures later had delayed language development, she said.

Gesture reflects the speed at which children develop language, but gesture may play a role in speeding up language development, Goldin-Meadow said. For example, parents may respond to a child’s pointing at an object by providing a label for the object. This would give the child just the right linguistic input at just the right moment.

The research was supported with grants from the National Institute of Child Health and Human Development and the Brain Research Foundation.