8-Jun-2017 9:05 AM EDT, by Perelman School of Medicine at the University of Pennsylvania contact patient services
favorite_border 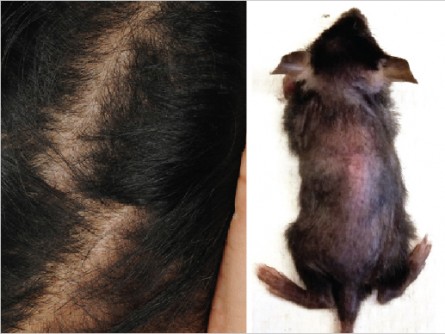 Newswise — PHILADELPHIA - It is almost axiomatic in medicine that the study of rare disorders informs the understanding of more common, widespread ailments. Researchers from the Perelman School of Medicine at the University of Pennsylvania who study an inherited disorder of skin, hair follicles, nails, sweat glands, and teeth called hypohidrotic ectodermal dysplasia (HED) have identified a mechanism that may also be disrupted in male pattern baldness, a more common condition. They published their findings this week in Nature Communications.

About one in 5,000 to 10,000 people are thought to have HED, although this may be an underestimate of its actual prevalence as this condition is not always diagnosed correctly. HED is most frequently caused by mutations in the EDA, EDAR, EDARRAD and WNT10A genes. In addition to its association with HED, mutations in WNT10A are the most common genetic defect observed in people who are born missing one or more teeth, but do not display other characteristics of the disease. These milder WNT10A mutations occur surprisingly frequently, in about 1 to 2 percent of the population. Interestingly, a variant of the WNT10A gene associated with lower levels of its protein’s expression has been linked to a greater likelihood of male pattern baldness, according to a recent genome-wide association study.

“By analyzing mice with the WNT10A mutation, as well as tissues from human patients with WNT10A mutations, we found that WNT10A regulates the proliferation, but not the maintenance, of stem cells in hair follicles,” said Sarah Millar, PhD, vice chair for Basic Research in the Department of Dermatology. “Together with a previously published genome-wide association study, our findings suggest that lower levels of WNT10A may contribute to male pattern baldness in some individuals.”

The team made mouse models for WNT10A-associated HED by deleting the Wnt10a gene.  The mutant mice displayed the same symptoms as HED patients with severe loss of function mutations in the WNT10A gene. Long-term absence of WNT10A leads to miniaturization of hair follicle structures and enlargement of the associated sebaceous glands, a phenomenon that is also observed in male pattern baldness.

Millar’s group and her clinical collaborators, including Emily Chu, MD, PhD, an assistant professor of Dermatology and John McGrath, MD, from King’s College, London, also discovered that cracking and scaling of palm and foot sole skin in WNT10A patients is due to decreased expression of a structural protein called Keratin 9, which is specifically expressed in these regions of skin and contributes to its mechanical integrity.

“Our studies took us back and forth between human patients and our mouse model,” said Millar. “Our goal was to find what happened to cellular components affected by the WNT10A mutation to make better treatments.”

Millar’s group showed that decreased proliferation and Keratin 9 expression in the absence of WNT10A resulted from failure of signaling through a well-characterized pathway that stabilizes a protein called beta-catenin, allowing it to enter the cell nucleus and activate gene transcription.

These findings indicate that small molecule drugs that activate the beta-catenin pathway downstream of WNT10A could potentially be used to treat hair thinning and palm and sole skin defects in WNT10A patients. These agents may also be useful for preventing hair loss in a subgroup of people with male pattern baldness.