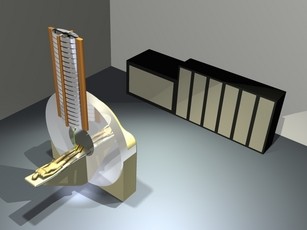 Artist's concept of a compact proton therapy system based on a "dielectric wall accelerator."

Newswise — Using innovative physics, researchers have proposed a system that may one day bring proton therapy, a state-of-the-art cancer treatment method currently available only at a handful of centers, to radiation treatment centers and cancer patients everywhere. Thomas R. Mackie, a professor at the University of Wisconsin and co-founder of the radiation therapy company TomoTherapy, will present this new design at next week's annual meeting of the American Association of Physicists in Medicine in Minneapolis.

Compared to the x rays conventionally used in radiation therapy, protons are potentially more effective, as they can deposit more cell-killing energy in their tumor targets and less in surrounding healthy tissue. However, to kill tumors, the protons must be accelerated to sufficiently high energies, which currently must be achieved in large, expensive devices called cyclotrons or synchrocyclotrons that cost hundreds of millions of dollars and occupy a room the size of basketball courts.

At the meeting, Mackie and his colleagues will present a proton-therapy design based on a much smaller device known as a "dielectric wall accelerator" (DWA). Mackie is part of a multidisciplinary team that includes his institutions as well as Lawrence Livermore National Laboratory and the University of California, Davis.

The DWA, currently being built as a prototype at Livermore, can accelerate protons to up to 100 million electron volts in just a meter. A two-meter DWA could potentially supply protons of sufficiently high energy to treat all tumors, including those buried deep in the body, while fitting in a conventional radiation treatment room.

The DWA is a hollow tube whose walls consist of a very good insulator (known as a dielectric). When most of the air is removed from the tube to create a vacuum, the tube can structurally withstand the very high electric-field gradations necessary for accelerating protons to high energies in a short distance.

In addition to its smaller size, a DWA-based proton therapy system would have another benefit—it could vary both proton energy and proton-beam intensity, two variables that cannot both be adjusted at the same time in existing proton-treatment facilities. This capability could lead to "intensity-modulated proton therapy" (IMPT), the proton version of the x-ray-based intensity modulated radiation therapy (IMRT) technique which has become a popular method for delivering precise radiation doses to the parts of a tumor.

Mackie cautions that clinical trials of the system are at least five years away. But if the DWA approach proves feasible, protons may eventually represent a widespread, rather than limited, option for treating cancer.

AAPM (www.aapm.org) is a scientific, educational, and professional organization of more than 6,000 medical physicists. Headquarters are located at the American Center for Physics in College Park, MD. Publications include a scientific journal ("Medical Physics"), technical reports, and symposium proceedings.