This video demonstrates VERSABALL®, the first commercial jamming gripper by Empire Robotics, operating at high speeds. The jamming robotic gripper technology was developed by researchers at the University of Chicago and Cornell University. 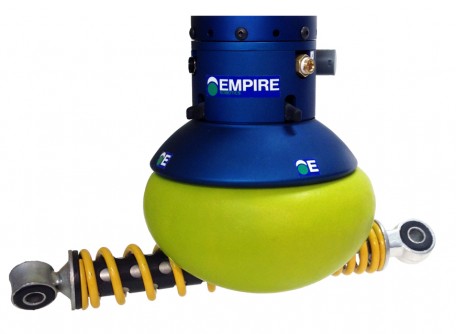 VERSABALL is shown here dexterously picking up a shock absorber, but it also can handle hex-nuts, glass or plastic bottles and other objects with odd shapes. VERSABALL is a new commercial product derived from the robot-gripper invention of researchers at the University of Chicago and Cornell University.

Newswise — The robot gripper invented by researchers at the University of Chicago and Cornell University is now available commercially. Empire Robotics, the company founded to commercialize the invention, is taking orders for the limited first release of its product called VERSABALL, scheduled to ship later this month.

“When we first started with the universal jamming gripper we did not think about industrial applications,” said Heinrich Jaeger, the William J. Friedman and Alica Townsend Professor in Physics at the University of Chicago. “But soon there were inquiries from various companies and in those early days we had to tell them that we are in basic research rather than R&D and that therefore we could not really make robotic grippers for sale.”

But since then John Amend, one of Jaeger’s Cornell collaborators, has co-founded Empire Robotics to bring the robot gripper technology to market. Amend, the company’s chief technology officer, developed much of the core technology as a Ph.D. student at Cornell. His adviser was robot gripper co-inventor Hod Lipson, associate professor of mechanical and aerospace engineering at Cornell.

“With our grippers we’re able to handle a wide range of different objects on the same manufacturing line. We get a lot requests for objects with holes in the center like hex-nuts, glass or plastic bottles, and objects that have odd shapes or shapes that vary between the individual parts,” Amend said.

Empire Robotics was founded in 2012 on technology licensed from UChicagoTech, UChicago’s Center for Technology Development & Ventures, and the Cornell Center for Technology Enterprise and Commercializion. Empire Robotics has been quietly working on product development since the company won a National Science Foundation Small Business Innovation Research grant in January 2013. The company has already delivered a handful of prototype grippers to early customers and is also developing customized solutions for others.

Company President and co-founder Bill Culley is excited by the response. “We started this company because of the large number of requests that were coming in looking for a commercial unit to purchase,” he said. “There’s no question that the industrial automation market is moving toward solutions that are more versatile, adaptive, and agile. Our VERSABALL gripper should make a big impact in this space.”

Company officials believe the technology might have broader impacts as well, including prosthetic devices that can assist with work tasks, in-home assistive devices, and versions suited for mobile military robots. For now, though, they are focused on continual performance improvements for their industrial model.

Robotic grippers that “jam” granular materials by vacuum-packing first made a splash in 2010 as part of a collaboration between researchers at Cornell, UChicago, and iRobot, and funded by the Defense Advanced Research Projects Agency. The science behind the gripper is a physical phenomenon called the jamming transition, investigated by Jaeger and colleagues Sidney Nagel, the Stein-Freiler Distinguished Service Professor in Physics, and Thomas Witten, the Homer J. Livingston Professor Emeritius in Physics. Through jamming granular materials or particles, which can flow and act like a fluid when loosely packed, can also interlock to become rock-solid when packed together.

This phenomenon is familiar to coffee drinkers who buy vacuum-packed coffee, which is hard as a brick until the package is unsealed. In fact, early jamming gripper prototypes were composed of ground coffee inside a party balloon.

VERSABALL grippers take advantage of this jamming behavior so that when the gripper is soft, it can be pressed against an object—passively conforming to take the object’s shape. The gripper then vacuum-hardens to grasp the object firmly. It’s a sharp deviation from the way other robot grippers work, but this simple idea is now poised to solve a broad range of automation challenges.

“We’ve come a long way in the short time we've been working to commercialize this gripper,” Amend said. “We’ve already made big advances in durability, holding force, and actuation speed.”

As for the materials, “Yes, we’re well beyond party balloons and ground coffee now.”