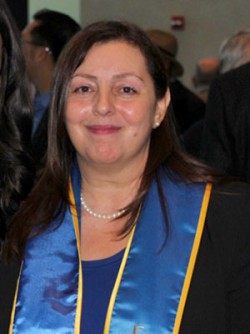 “Cervical cancer is a leading cause of cancer death among women in the developing world, and 80 percent of these patients live in lower- or middle-income countries, such as the ones in our trial. It is essential that we have data applicable to these real-world settings,” said May Abdel-Wahab, MD, PhD, FASTRO, a study co-author and director of the Division of Human Health at the International Atomic Energy Agency in Vienna, Austria.

“Our trial demonstrates that combining pelvic radiation therapy with four fractions of 7 Gy HDR brachytherapy is effective for locally advanced cervical cancer. In addition, it gives physicians data-supported guidance from a large, randomized study on what to expect in terms of outcomes if a regimen of two, 9-Gy fractions is used in resource-constrained settings.”

The prospective, randomized multicenter trial tested two approaches to delivering HDR brachytherapy with or without chemotherapy for patients with intermediate-stage cervical cancer. All patients received 46 Gy of curative-intent pelvic external beam radiation therapy in 23 fractions. All patients also received HDR brachytherapy in one of two dosing schedules. Half of the patients received four applications of 7 Gy each (4x7 Gy), while the other half received two applications of 9 Gy each (2x9 Gy). Additionally, half of the patients in each brachytherapy group received chemotherapy (cisplatin 40 mg/m2 in weeks 1-5), while the other half did not. The median follow-up for surviving patients was 48 months (range 1-84 months).

A total of 601 patients with intermediate-stage cervical cancer were enrolled between September 2005 and May 2010. Patients in this international trial represented seven countries, including Mumbai (257 cases), Peru (147), South Africa (76), Brazil (53), Pakistan (31), Morocco (19) and Macedonia (18). The average patient age was 49 years (range 26-71). All patients had either stage IIB (73.2%) or stage IIIB (26.8%) disease, and no patients had contraindications for radiation therapy or chemotherapy.

Among patients with stage IIB disease, neither brachytherapy dosing nor the addition of chemotherapy had a significant influence on the overall survival rate. Survival rates were estimated using the Kaplan-Meier method and compared between arms using the log-rank test.

There was a modest positive effect of cisplatin on toxicity in the 2x9 Gy brachytherapy arm only (p = 0.066), but chemotherapy did not significantly influence overall survival, cancer-specific survival or tumor control in the cervix and surrounding region.

“The findings that chemotherapy did not significantly affect survival or tumor control in this setting seem to be different than the results of the meta-analysis from the Chemoradiotherapy for Cervical Cancer Meta-Analysis Collaboration, which found six percent differences in local control due to the effect of chemotherapy,” explained Dr. Abdel-Wahab. “However, it is important to note that our study was not powered to detect differences in local control that are less than 10 percent. In other words, the results of the two studies are not mutually exclusive.”

In addition to providing guidance for clinical teams treating women with cervical cancer, the study also demonstrates the feasibility of conducting global clinical trials, including trials in lower- and middle-income countries where resources for research tend to be more restricted.

The abstract, “Analysis of outcomes using external beam radiotherapy plus high dose rate brachytherapy (4x7 Gy or 2x9 Gy) for cervix cancer in a multi-institution trial,” will be presented in detail during a news briefing and the Plenary Session at ASTRO’s 59th Annual Meeting in San Diego (full details below). To schedule an interview with Dr. Abdel-Wahab and/or outside experts in gynecologic cancer, contact ASTRO’s media relations team on-site at the San Diego Convention Center September 24 through 27, by phone at 703-286-1600 or by email at [email protected].