Is It Long-Ago Reality Or Reality TV? Virtual Worlds Bring Past to Life 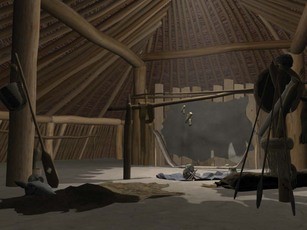 The 3-D movie, On-A-Slant Mandan Indian Village, developed at NDSU, is one example of how digital technology can be used to re-create historical sites the way they may have looked, in this case, in the late 1700s.

Newswise — Computer technology brings ancient worlds to life, but archaeologists debate whether it resembles long-ago reality or reality TV. Jeffrey Clark, Ph.D., director of the Archaeology Technologies Laboratory at North Dakota State University, Fargo, notes the technology that creates such virtual worlds allows people to explore historical locations in a unique way. At the same time, virtual models of past places and the artifacts found there may portray facts bolstered with assumptions. Clark's comments are among those featured in the article "Digital Digs" in a recent issue of Nature.

The digital models of artifacts and the settings in which they were once used can be recreated with a variety of computer hardware and software. But because not every detail may be known about a place in the past or an item found there, Clark points out that some models may be based on known details—as well as on assumptions—making them partially accurate. "If you really try to get the visual simulation as accurate as possible," says Clark in the Nature article, "you must research the nitty-gritty details."

Archaeologists around the world continue to discuss whether the high-tech tools help the science of archaeology or merely bring a gee-whiz factor to the subject. Since the 1990s, archaeologists have created lost worlds using technology. Clark's team at NDSU used computer graphics to create a 3-D movie of a Mandan Indian Village for the Lewis and Clark bicentennial celebration. The team also developed RawKee open source software to generate Web 3-D content.

Clark says using technology in archaeology presents challenges and opportunities. Digital laser scans, for example, allow scientists to produce 3-D replicas of artifacts that can be studied by others around the world, while preserving fragile artifacts. "If museums and universities around the world were to digitize their artifacts, you could create a database that any archaeologist could access without leaving his or her computer," says Clark. "Technology can allow us to pull together a vast amount of data that is scattered around the globe." Clark says virtual heritage experts are now drafting guidelines to document how such virtual models are created. Guidelines could define whether a specific percentage of a virtual artifact is created from archaeology records and the remainder from expert assumptions.

NDSU recently hosted an international conference on the theme Digital Discovery, Exploring New Frontiers in Human Heritage. More than 275 people from nearly 30 countries attended the Conference for Computer Applications and Quantitative Methods in Archaeology in Fargo, the first time the conference was held outside Europe. While the Nature article debates the role of technology in archaeology, Clark believes technology makes information about the past more accessible to the public. "We can't travel back in time, but using archaeological data combined with technology, we can create historical sites the way they may have looked, giving visitors to the virtual worlds the feeling of being in that place and time."

Nature is a noted weekly international journal which publishes peer-reviewed research in all areas of science and technology.