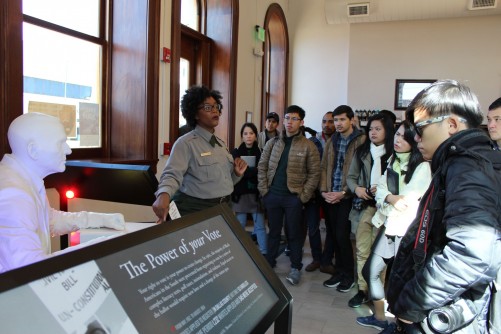 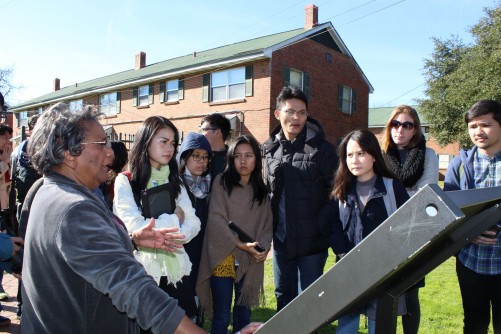 Newswise — KENNESAW, Ga. (Feb. 9, 2017) — A group of students from Southeast Asia will study civic engagement and explore the Southern roots of the struggle for civil and human rights in the U.S. during a five-week leadership institute at Kennesaw State University. The Institute is funded by a grant from the U.S. Department of State.

The 22 participants in the 2017 Young Southeast Asian Leaders Initiative (YSEALI) Institute on Civic Engagement met with foot soldiers of the civil rights movement and toured significant sites like the Edmund Pettus Bridge in Selma, Alabama, and the 16th Street Baptist Church in Birmingham, where four girls were killed in a racially motivated bombing. In Atlanta, they will visit the Center for Civil and Human Rights and meet with officials at the Carter Center.

Under the $720,000, three-year grant, Kennesaw State faculty members will teach a weekly seminar on international human and civil rights, and classes on leadership and ethics, social entrepreneurship, peace studies and conflict management. Kennesaw State is among a handful of universities nationwide funded to host YSEALI fellows, who arrived on campus last week.

The group consists of 22 students and recent graduates from Indonesia, Laos, Malaysia, Myanmar, the Philippines, Thailand, Vietnam, Cambodia, and Brunei, all of whom who have been identified among their nations’ most promising youth aged 18 to 25. It is the second YSEALI Institute on Civic Engagement cohort hosted at Kennesaw State.

“Kennesaw State is uniquely positioned to expose this group of young leaders to significant aspects of one of this country’s greatest struggles for human rights,” said Lance Askildson, vice provost and chief international officer. “Our proximity to the birthplace of the civil rights movement, the focus within several of our academic departments on peace and conflict management and the University’s sustained focus on global learning and engagement all align perfectly to the theme for this year’s institute. Our hope is that these fellows will lead the way on human rights issues in their region, in their respective countries and in their local communities.”

Launched in 2013, YSEALI is former President Barack Obama’s signature program to strengthen leadership development and networking in Southeast Asia. The intensive, short-term YSEALI Institute focuses on critical topics identified by youth in the region: civic engagement; environment and natural resources management; and entrepreneurship and economic development. The program seeks to provide participants with civic engagement, leadership and collaboration skills, as well as cultivate an understanding of U.S. culture, values, and institutions, and foster relations between the U.S. and Southeast Asian nations.

In addition to the intensive series of classes and workshops, the participants of this year’s YSEALI Institute will tour local landmarks such as Kennesaw Mountain National Battlefield Park and the Booth Western Art Museum to deepen their knowledge of American history and culture. They also will travel to Charleston to tour an old slave market and experience Gullah Geechee culture; to Miami for a workshop on immigration and tour of the Freedom Tower; and to Washington, D.C., for a peace and human rights training and exhibits at the Holocaust and Smithsonian museums.

In May, the participants will join seven Kennesaw State honor students at a symposium hosted by Yale University’s Singapore campus, where they will present community service project proposals developed as part of the YSEALI Institute on Civic Engagement.

Click here and follow YSEALI links to learn more about the 2017 Institute on Civic Engagement at Kennesaw State.

A leader in innovative teaching and learning, Kennesaw State University offers more than 150 undergraduate, graduate and doctoral degrees to its more than 35,000 students. With 13 colleges on two metro Atlanta campuses, Kennesaw State is a member of the University System of Georgia and the third-largest university in the state. The university's vibrant campus culture, diverse population, strong global ties and entrepreneurial spirit draw students from throughout the region and from 92 countries across the globe. A Carnegie-designated doctoral institution, it is one of the 50 largest public institutions in the country. For more information, visit kennesaw.edu.