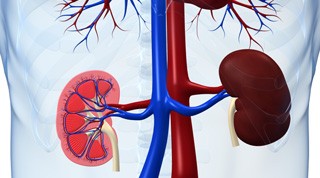 Newswise — Investigators in The Cancer Genome Atlas (TCGA) Research Network have uncovered a connection between how tumor cells use energy from metabolic processes and the aggressiveness of the most common form of kidney cancer, clear cell renal cell carcinoma (ccRCC). Their findings demonstrate that normal metabolism is altered in ccRCC tumor cells, and involves a shift from using one metabolic pathway to another. This change – termed a metabolic shift – correlates with tumor stage and severity in some cases.

The scientists also found mutations in a pathway that may cause increased aggressiveness in this cancer. Taken together, the findings may offer new insight into underlying disease mechanisms and potential treatments as well as an understanding of how some cancer cells can shift from using normal metabolic pathways to alternative pathways, thereby providing a growth advantage to tumor cells. In general, changes in metabolic enzymes that promote growth of the tumor are associated with worse patient outcomes in this disease. This latest TCGA research supports previous evidence of a metabolic shift in a different subtype of kidney cancer.

The scientists used data generated by TCGA, a collaborative effort funded by the National Cancer Institute (NCI) and the National Human Genome Research Institute (NHGRI), both parts of the National Institutes of Health. The results of this study were published online June 23, 2013, in Nature.

In the study, scientists examined nearly 450 ccRCC tumors and matched each with a normal sample from the same patient. When they looked at the amounts of specific proteins expressed in cancer cells, they found that low levels of one protein essential to cell metabolism (AMPK) and high levels of another (acetyl-CoA carboxylase) were associated with worse patient outcomes.

“Earlier findings from the characterization of other types of cancers have given us important clues as to how to design better therapies for these cancers,” said NCI Director Harold Varmus, M.D. “The new results from the TCGA analysis of clear cell renal cell carcinomas provide an explanation for how mutations in certain genes can alter chromosome chemistry to produce changes in enzyme levels that affect cell metabolism in ways correlated with clinical outcomes. These findings will stimulate some novel ideas about therapies for other lethal cancers.”

In addition to the connection between metabolic shift and tumor aggressiveness, TCGA Research Network scientists discovered that, in some cases, the metabolic shift may be caused by changes in the PI3K cellular pathway, which helps regulate cell metabolism. The investigators observed a number of changes in P13K pathway genes and its regulators in tumor cells, including DNA mutations in protein-coding areas, as well as other changes affecting gene expression. They found such alterations in the PI3K pathway — or its partner pathways, AKT and mTOR — in 29 percent of tumor samples. AKT and mTOR also are essential for regulating cellular metabolism.

The effects of these changes show the importance of the PI3K/AKT/mTOR pathways. For example, researchers found a decrease in factors that activate tumor suppressor genes – the genes that produce proteins aimed at blocking tumor development. At the same time, factors that turned on genes that inhibit the PI3K pathway were blocked. Both of these changes promote activity in the PI3K/AKT/mTOR pathways. The results suggest the pathways’ potential as therapeutic targets with inhibitor drugs.

“These findings illustrate how large, multi-dimensional datasets obtained from the rigorous analyses of hundreds of tumors can be mined to uncover new insights into cancer biology,” said NHGRI Director Eric Green, M.D., Ph.D. “By creating these types of datasets, TCGA has advanced our fundamental understanding of this type of cancer.”

W. Marston Linehan, M.D., chief of the NCI Urologic Oncology Branch and one of the study’s leaders, sees several implications from the results. “The finding of a metabolic shift in the aggressive tumors could provide the foundation for the development of a number of novel approaches to therapy for patients with advanced kidney cancer,” said Linehan.

“The molecular analysis of this disease impacts understanding of all cancers through furthering insights into the role of metabolic perturbation in malignancy,” said Richard A. Gibbs, Ph.D., another lead investigator in the project and director of the Human Genome Sequencing Center at Baylor College of Medicine, Houston.

NCI estimates that nearly 65,000 people in this country will be diagnosed with ccRCC in 2013, and more than 13,000 people will die from the disease. More than 50 percent of patients with early stage renal cell cancer are successfully treated with current therapies. However, nearly all patients with the most severe stage of this cancer have a poor prognosis.

The TCGA Research Network consists of more than 150 researchers at dozens of institutions across the nation. A list of participants is available at http://cancergenome.nih.gov/abouttcga/overview. More details about The Cancer Genome Atlas, including Quick Facts, Q&A, graphics, glossary, a brief guide to genomics and a media library of available images can be found at http://cancergenome.nih.gov.