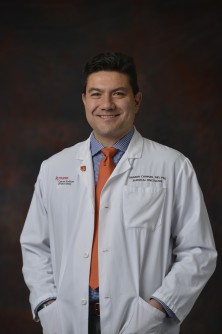 Newswise — New Brunswick, N.J., May 17, 2017 –Improvements in chemotherapy and liver surgery have resulted in increased overall survival in patients with advanced stage colorectal cancer in recent decades. In order to better predict outcomes for these patients, researchers at Rutgers Cancer Institute of New Jersey conducted a retrospective analysis and found that stage IV colorectal cancer patients who survived at least two years have a better prognosis than originally thought. Results of the work will be presented as part of a poster presentation at the American Society of Clinical Oncology Annual Meeting being held in Chicago early next month.

“With patients in this population living longer, it is imperative we refine prognostic information to more accurately predict survival.  This data will assist multi-disciplinary cancer management teams in making treatment decisions that ultimately will impact a patient’s quality of life,” notes Darren Carpizo, MD, PhD, surgical oncologist and director of the Hepatobiliary Program at Rutgers Cancer Institute and senior investigator of the work.

Investigators examined data on more than a thousand stage IV colorectal cancer patients seen at Rutgers Cancer Institute between 2005 and 2015. This included patients who had their cancer removed through surgery and were treated with follow-up therapies, as well as those patients who were not eligible for surgery. Complete data was available for 125 patients who survived for more than two years (75 had surgical removal of their cancer; 50 did not).  Median overall survival of patients who underwent surgery was not reached, while median overall survival for those who were not eligible for surgery was six years and three months.

“For those patients not eligible for initial surgery who survive two years, these findings indicate they may benefit from future surgery, if feasible, to treat remaining disease. For those patients who initially had surgery, this information may be helpful to identify patients who might benefit from repeat surgery to resect any recurrent metastatic disease,” adds Dr. Carpizo, who is also an associate professor of surgery and pharmacology at Rutgers Robert Wood Johnson Medical School.