Looking From Space for Nuclear Detonations 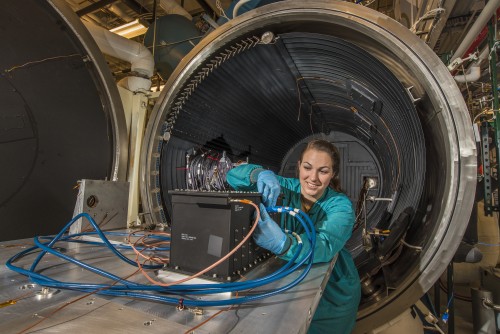 Sandia National Laboratories researcher Rachel Trojahn prepares one of the subsystems, or boxes, that makes up Sandia’s Global Burst Detector for a test in the labs’ Flight Test Chamber. The chamber exposes individual boxes and the fully assembled flight system to the vacuum and thermal environment they’ll experience in orbit.

ALBUQUERQUE, N.M. — Sandia National Laboratories’ Jaime Gomez was too busy to celebrate the successful launch of the latest nuclear detonation detection system — he was already deep into the next generation.

As project lead, Gomez oversaw teams responsible for everything from development to post-launch testing. The launch was the 12th and final of the Block IIF (GPSIIF) series of GPS satellites in medium Earth orbit.

Project Manager Bridget McKenney said that even before the final GPSIIF launch, Sandia was producing and delivering another generation of GBDs for a new round of eight satellites, GPSIII, that Lockheed Martin Corp. is building. Sandia is already looking ahead to detectors for the launch series after that, dubbed Prime.

“We work 10 years ahead, from the time we get a concept for what the next generation of improved technologies and sensing will be,” McKenney said. Each GBD program starts with the initial concept, followed by approvals, engineering development, an extensive and complex design cycle and production and testing. The work is funded by the National Nuclear Security Administration.

Sandia has been in the business of nuclear detonation detection for more than 50 years, starting with the 1963 launch of the first of 12 U.S. Vela satellites to detect atmospheric nuclear testing and verify compliance with the Limited Test Ban Treaty of 1963 and subsequently the Threshold Test Ban Treaty of 1974. That marked the start of the U.S. Nuclear Detonation Detection System that supports treaty monitoring.

GPSIII scheduled to launch next year

Defense Support Program satellites followed, succeeded by the earliest GPS satellites in 1978. The first of the IIF series was launched in 2010. The first GPSIII is scheduled to launch in 2017.

From the start, GPS satellites were seen as an ideal platform to look for nuclear detonations. Gomez said the sheer numbers planned meant there always would be many GBD systems in space, a detection redundancy highly prized during the Cold War. Today, GPS satellites are important for treaty verification and countless civilian uses, including timing signals for communications networks, financial markets and power grids, ship navigation and even pinpointing where crops might need more water or fertilizer.

Sandia’s GBD mission is appealing to Gomez and the rest of the Sandia team because it deals with space. “I think we’re all fascinated by space,” said Gomez, deputy project manager for the generation that will fly on GPSIII. “And the treaty verification work is meaningful to a lot of folks.”

Detection was a natural extension for the labs that designed the early stockpile. They understood the physics and engineering of the weapons and the detectable optical, electromagnetic pulse and X-ray signals they produce. “Those are the three that make it to space and what the GBD tries to detect,” Gomez said. Sandia develops the optical sensors; Los Alamos National Laboratory is responsible for electromagnetic pulse and X-ray sensors.

It takes about two years to build, test and integrate GBD hardware into a satellite system, Gomez said.

Five subsystems — what the teams call “boxes” — of sensors and instruments make up a GBD: three from Sandia and two from Los Alamos.

Sandia integrates it all into an overall system and performs seemingly endless tests. When a satellite launches, everything aboard faces extreme temperatures, vibration and shock. Sandia’s testing and computer models help determine how the rigors of launch and deployment will affect the GBD.

Teams assemble boxes from printed circuit boards, wiring harnesses and other mechanical hardware, conducting electrical and thermal testing on individual modules and pieces before assembly into the box. They follow with integration, electrical, functional, thermal and vibration tests for each box. The five completed boxes together become a GBD system or payload. The entire system is then subjected to integration, functional, electrical, thermal-vacuum and other tests before it’s shipped to the space vehicle contractor. Further electrical testing is done at the contractor site.

“Teams that build the hardware here develop a test plan suited for their subsystem and do that testing. Then we integrate the payload as the five boxes and do additional testing,” Gomez said. “At every level of integration, whether it’s the box level or a whole system at the vehicle level, you add to the testing to make sure that at every integration point the payload is operating.”

That’s especially important because the hardware can’t be repaired in space.

“Some things you can fix through software but you depend on building something that has high reliability,” Gomez said. McKenney added, “We have a very good track record for that. I think we can say that our payloads have substantially exceeded their design life.”

Payload must last as long as satellite

“GPS drives us because we want our payload to last as long as the bird does,” McKenney said.

Sandia teams work where the payloads go as they move toward launch. Gomez described the process for IIF: Once testing showed the GBD met requirements, Sandia shipped its payload to the satellite contractor, Boeing in El Segundo, California, for more tests. Sandia employees at the Boeing site provided GBD components for Boeing to install. Then the satellite went through months of additional tests, aided by the on-site Sandia team. Some 60 to 90 days before launch, Boeing shipped the satellite to Cape Canaveral, where ground crews aided by Sandia also did tests. Days after launch, a Sandia team arrived at Schriever Air Force Base, Colorado, for about a month of early orbit testing before the system was handed over to the Air Force to operate.

Even that isn’t the end. “We have a group that examines telemetry coming down from our payloads so we can monitor the state of health,” McKenney said. Developers use that information to improve next-generation technology. Under an agreement with the Air Force, Sandia also develops ground station components that support the Nuclear Detonation Detection System and integrate data from all the satellites.

As project lead, Gomez worked with the program office headed by McKenney, subsystem managers, team leaders and colleagues at Los Alamos to ensure GBD development and delivery stayed on schedule. “It’s very much about schedule because our payload is integrated on a satellite that the Air Force is paying a subcontractor to build,” he said. “We have equipment that bolts onto that satellite so we need to be there and we need to be there with a product that works.”

He smiled and quoted a 2015 tweet from astronaut Scott Kelly that’s been informally adopted by members of Sandia’s satellite group: “Space is hard.”