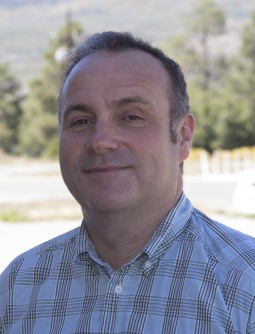 Iain May was recognized for his work to increase the availability of critical medical isotopes.

Newswise — LOS ALAMOS, N.M., October 20, 2016—A scientist at Los Alamos National Laboratory was recently recognized by the National Nuclear Security Administration (NNSA) for his work towards ensuring the reliability and domestic supply of a critical medical isotope used for diagnostic imaging. Iain May received the award in recognition of his work to support the development of new production methods for molybdenum-99, the precursor isotope used to formulate radiopharmaceuticals that diagnose heart disease, cancer, neurologic disease and other applications.

“Importantly, these new production methods for Mo-99 do not require highly enriched uranium,” said Nina Rosenberg, program director of nuclear nonproliferation and security at Los Alamos. “Dr. May has used the scientific resources of the Laboratory to have a positive impact on medical treatment as well as nuclear nonproliferation.‎”

Efforts to develop an alternative production capability of Mo-99 in North America were spurred by supply disruptions as a result of aging foreign reactors as well as ongoing nonproliferation and domestic supply concerns.

NNSA has been funding work to minimize and eliminate the use of proliferation-sensitive highly enriched uranium (HEU) to produce Mo-99 and develop a U.S.-based production capability that has been absent since 1989. In 2010 the Canadian government announced that the NRU reactor, which supplies about 40 percent of the world supply of Mo-99, would cease routine production at the end of October 2016.

May’s award from NNSA acknowledged his work supporting the Office of Material Management and Minimization’s Molybdenum-99 Program, and in the minimization of HEU in civilian applications. NNSA commended May for his efforts with uranium detection technologies and project management support that “has been critical to the significant progress made in the development of low enriched uranium fission-based molybdenum-99 production technologies.”

May accepted the award from Jeff Chamberlin, director of the NNSA Office of Conversion, and Rilla Hamilton, the NNSA Mo-99 program director, at the 2016 Mo-99 Topical Meeting in St. Louis last month.