Loyola Lung Transplant Patient to Do Hustle Up the Hancock 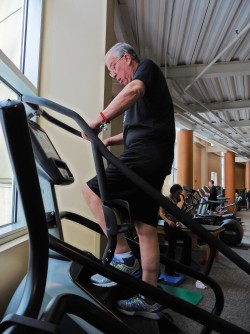 Newswise — Robert Senander, 69, of Winfield, Ill., made headlines last year when he became one of five people to undergo a lung transplant at Loyola University Health System in little more than 24 hours. This was the first time in Illinois that five successful lung transplants have been performed in such a short time.

Before his transplant, Mr. Senander had been fighting for his life. He was diagnosed with pulmonary fibrosis in 2009. This is a disease marked by scarring of the lungs and difficulty breathing. There is no cure and most people only live three to five years after diagnosis.

In a matter of weeks and less than a year after his transplant, he will take to the steps of the John Hancock Center for Hustle up the Hancock. Mr. Senander will be joined by the doctors and nurses who cared for him in the hospital. They will climb 94 flights of stairs to raise funds for lung disease research, advocacy and education.

"Mr. Senander embodies what it means to take charge of your health and well-being," said Jennifer Johnson, RN, lung procurement coordinator, LUHS. "It has been a source of joy for me to see his transformation from feeling ill and waiting for a lung transplant to accepting the challenge of charging up the stairs to improve respiratory health for others in need. I look forward to climbing the stairs with him and cheering him on along the way."

Mr. Senander began training for the climb in December with wellness specialists who monitored his vitals to ensure he didn’t overexert himself. Mr. Senander worked out four to five times a week using a combination of cardiovascular and weight-training exercises to get in shape. His goal is to complete the climb in two hours.

"I am grateful to the doctors and nurses who cared for me and look forward to climbing with them in honor of organ donors and those suffering from lung disease," Mr. Senander said.