Past winners include four scientists who went on to win the Nobel Prize. 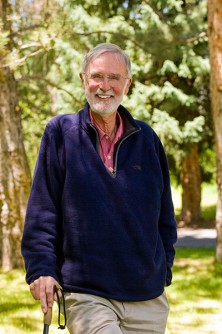 Newswise — CHAPEL HILL, NC – The UNC School of Medicine has awarded the 14th Perl-UNC Neuroscience Prize to Marcus Raichle, MD, a neurologist from Washington University in St. Louis who has made remarkable research findings about the persistent brain activity of our at-rest minds.

Raichle’s imaging methods use the brain’s blood flow to correlate the activity of different regions of the brain while we’re at rest. The method is now used in the Human Connectome Project, the large NIH-funded brain initiative that aims to create a comprehensive map of the major neuronal connections in the human brain.

William L. Roper, MD, MPH, dean of the UNC School of Medicine, will present the Perl-UNC Neuroscience Award to Dr. Raichle in a ceremony February 20 at 3 p.m. at UNC’s Medical Biomolecular Research Building. A lecture by Dr. Raichle and reception will follow.

“I’m immensely flattered by this award and delighted that it was a complete surprise,” Raichle said.

The Perl-UNC Neuroscience Prize is given annually to an active researcher who has made a seminal discovery that advances our understanding of the brain.

“Marcus Raichle definitely meets that standard,” said William Snider, MD, director of the UNC Neuroscience Center and chairman of the Perl-UNC Neuroscience Prize committee. “Functional brain imaging – using measurements of blood flow to demonstrate that certain parts of the brain light up when we do something – has captured the imagination of the public.”

Researchers, for instance, have used various imaging techniques to find out which parts of the brain are involved in everything from lingering pain to our use of language. “But Marcus Raichle’s work shows that that’s just the tip of the iceberg,” Snider said.

Raichle, a professor of radiology, neurology, and neurobiology and biomedical engineering, conducted imaging experiments to show that there’s constant background activity in the brain even while a person is not doing anything – not even thinking. He found that about 80 percent of the brain’s chemical reactions happen in this resting state and that the neurons responsible for these reactions are connected to each other in very clear cut ways. That is, when we’re doing nothing, our brain cells are busy chattering to each other.

“He called this the brain’s ‘default mode network,’” Snider said. “We now think that this network is very important in conditions such as schizophrenia and especially Alzheimer’s disease.”

The Perl-UNC Neuroscience Prize, which carries a $10,000 cash award, is becoming increasingly well known among biomedical scientists. Four of its previous winners went on to win the Nobel Prize in either chemistry or physiology and medicine. One other Perl-UNC Neuroscience Prize recipient went on to win the Kavli Prize, which to neuroscientists has become nearly as prestigious as the Nobel.

The Perl-UNC Neuroscience Prize, established in 2000, is named after UNC professor emeritus Edward Perl, who discovered that a specific type of sensory neuron responded to painful stimuli. Before this, scientists thought that neurons responded to all stimuli and then the pain responses were sorted out in the spinal cord. The discovery had a major impact on the field of pain research, particularly in the development of pain medications.