Mars May be Cozy Place for Hardy Microbes 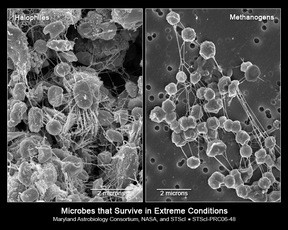 These close-up images, taken by an electron microscope, reveal tiny one-cell organisms called halophiles and methanogens. In a two-year laboratory study, scientists subjected these organisms to increasingly lower temperatures to determine the coldest temperatures at which the microbes could survive and reproduce. The study shows the microbes could survive at below-freezing temperatures and are within the temperature range on present-day Mars. The organisms also developed a defense mechanism that protected them from cold temperatures. The halophiles and methanogens are part of a hardy group of microbes called extremophiles, which thrive in the harshest environments on Earth.

Newswise — A class of especially hardy microbes that live in some of the harshest Earthly environments could flourish on cold Mars and other chilly planets, according to a research team of astronomers and microbiologists.

In a two-year laboratory study, the researchers discovered that some cold-adapted microorganisms not only survived but reproduced at 30 degrees Fahrenheit, just below the freezing point of water. The microbes also developed a defense mechanism that protected them from cold temperatures. The researchers are members of a unique collaboration of astronomers from the Space Telescope Science Institute and microbiologists from the University of Maryland Biotechnology Institute's Center of Marine Biotechnology in Baltimore, Md. Their results appear on the International Journal of Astrobiology website.

"The low temperature limit for life is particularly important since, in both the solar system and the Milky Way Galaxy, cold environments are much more common than hot environments," said Neill Reid, an astronomer at the Space Telescope Science Institute and leader of the research team. "Our results show that the lowest temperatures at which these organisms can thrive fall within the temperature range experienced on present-day Mars, and could permit survival and growth, particularly beneath Mars's surface. This could expand the realm of the habitable zone, the area in which life could exist, to colder Mars-like planets."

Most stars in our galaxy are cooler than our Sun. The zone around these stars that is suitable for Earth-like temperatures would be smaller and narrower than the so-called habitable zone around our Sun. Therefore, the majority of planets would likely be colder than Earth.

In their study, the scientists tested the coldest temperature limits for two types of one-cell organisms: halophiles and methanogens. They are among a group of microbes collectively called extremophiles, so-named because they live in hot springs, acidic fields, salty lakes, and polar ice caps under conditions that would kill humans, animals, and plants. Halophiles flourish in salty water, such as the Great Salt Lake, and have DNA repair systems to protect them from extremely high radiation doses. Methanogens are capable of growth on simple compounds like hydrogen and carbon dioxide for energy and can turn their waste into methane.

"We have extended the lower temperature limits for these species by several degrees," said Shiladitya DasSarma, a professor and a leader of the team at the Center of Marine Biotechnology, University of Maryland Biotechnology Institute. "We had a limited amount of time to grow the organisms in culture, on the order of months. If we could extend the growth time, I think we could lower the temperatures at which they can survive even more. The brine culture in which they grow in the laboratory can remain in liquid form to minus 18 degrees Fahrenheit (minus 28 degrees Celsius), so the potential is there for significantly lower growth temperatures."

The scientists also were surprised to find that the halophiles and methanogens protected themselves from frigid temperatures. Some arctic bacteria show similar behavior.

"These organisms are highly adaptable, and at low temperatures they formed cellular aggregates," DasSarma explained. "This was a striking result, which suggests that cells may 'stick together' when temperatures become too cold for growth, providing ways of survival as a population. This is the first detection of this phenomenon in Antarctic species of extremophiles at cold temperatures."

The scientists selected these extremophiles for the laboratory study because they are potentially relevant to life on cold, dry Mars. Halophiles could thrive in salty water underneath Mars's surface, which can remain liquid at temperatures well below 32 degrees Fahrenheit (0 degrees Celsius). Methanogens could survive on a planet without oxygen, such as Mars. In fact, some scientists have proposed that methanogens produced the methane detected in Mars's atmosphere.

"This finding demonstrates that rigorous scientific studies on known extremophiles on Earth can provide clues to how life may survive elsewhere in the universe," DasSarma said.

The researchers next plan to map the complete genetic blueprint for each extremophile. By inventorying all of the genes, scientists will be able to determine the functions of each gene, such as pinpointing the genes that protect an organism from the cold.

Many extremophiles are evolutionary relics called Archaea, which may have been among the first homesteaders on Earth 3.5 billion years ago. These robust extremophiles may be able to survive in many places in the universe, including some of the roughly 200 worlds around stars outside our solar system that astronomers have found over the past decade. These planets are in a wide range of environments, from so-called "hot Jupiters," which orbit close to their stars and where temperatures exceed 1,800 degrees Fahrenheit (1,000 degrees Celsius), to gas giants in Jupiter-like orbits, where temperatures are around minus 238 degrees Fahrenheit (minus 150 degrees Celsius).

The discovery of planets with huge temperature disparities has scientists wondering what environments could be hospitable to life. A key factor in an organism's survival is determining the upper and lower temperature limits at which it can live.

Although Martian weather conditions are extreme, the planet does share some similarities with the most extreme cold regions of Earth, such as Antarctica. Long regarded as essentially barren of life, recent investigations of Antarctic environments have revealed considerable microbial activity. "The Archaea and bacteria that have adapted to these extreme conditions are some of the best candidates for terrestrial analogues of potential extraterrestrial life; understanding their adaptive strategy, and its limitations, will provide deeper insight into fundamental constraints on the range of hospitable environments," DasSarma said.

The team's research was supported through grants from the Space Telescope Science Institute's Director's Discretionary Research Fund, a National Science Foundation, and the Australian Research Council.

The Space Telescope Science Institute is operated for NASA by the Association of Universities for Research in Astronomy, Inc., Washington.

One of five centers forming the University of Maryland Biotechnology Institute (UMBI) the Center of Marine Biotechnology, located in Baltimore's Inner Harbor, employs researchers who apply the tools of modern biology and biotechnology to study, protect, and enhance marine and estuarine resources.

With research centers in Baltimore, Rockville, and College Park, the University of Maryland Biotechnology Institute is the newest of 13 institutions forming the University System of Maryland. UMBI has 85 ladder-ranked faculty and a 2006 budget of $60 million. Celebrating the institution's 20th year of service to Maryland and the world, UMBI is led by microbiologist and former biotechnology executive Dr. Jennie C. Hunter-Cevera.

For images and additional information about these microbes on the Web, visithttp://hubblesite.org/news/2006/48