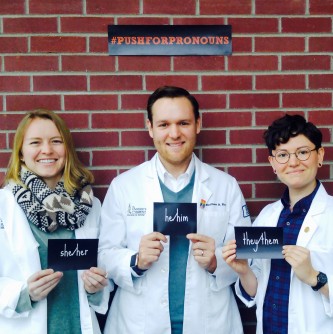 “A reported 70 percent of transgender patients experience discrimination when accessing medical care,” says Al York, a UVM Class of ’19 medical student, current Gender & Sexuality Alliance (GSA) leader and NMSQA member. “This leads trans individuals to access health care more infrequently. Hearing the wrong pronouns or identifiers – such as being called ‘ma’am’ when you identify differently – in any setting can be really embarrassing and isolating for trans and gender nonconforming individuals, and can prevent you from going back.”

York, a transgender (trans) student who is active in the UVM College of Medicine GSA group, is helping redefine the Vermont Integrated Curriculum to be more inclusive of trans health and gender non-conformity. The GSA has already worked to establish gender neutral restrooms around the medical school, and gender neutral changing stalls for UVM’s Anatomy lab. The goal of these efforts is to cultivate an inclusive environment and to improve patient care, says York. “As a result of infrequent health care access, we see trans folk have higher rates of preventable illness like HIV, higher rates of depression and mental illness, and higher rates of cardiovascular disease. We have to fix this.”

To help raise awareness of gender non-conformity, students from the UVM GSA are asking community members to add their pronoun to their email signature.

“This not only helps promote a culture of respect for patients, but also for colleagues and trainees within medicine,” says medical student Matthew Shear ’17, past GSA leader and founding NMSQA member. “UVM trains its students to provide outstanding medical care with respect, empathy and compassion. For transgender and gender non-conforming patients, using the correct pronoun is the first step. I use he/him pronouns, and Al uses they/them. How would I know without asking directly, or being alerted by an email signature or name tag?”

Over the past several years, support for LGBTQ rights has been growing rapidly. Medical education has followed suit, and in 2014, the AAMC released guidelines to help medical schools incorporate curricular change related to LGBTQ health. A new journal now in its third volume, LGBT Health publishes research related to gender and sexual minority patient care. Despite the positive gains, LGBTQ rights continues to be a divisive political issue. It is still legal in many states to discriminate against LGBTQ employees. Notably, a law passed last week in North Carolina blocks cities from passing any law protecting against LGBTQ discrimination. In addition, the bill banned transgender individuals from using the bathroom of the gender with which they most identify.

NMSQA and UVM College of Medicine GSA members hope to create a medical culture where everyone feels welcomed and affirmed.

“In order to create an inclusive environment for transgender and gender nonconforming patients, peers, and colleagues, we should normalize asking for and volunteering our own pronouns during introductions” says York. “While asking can feel awkward at first, it is much more awkward and hurtful to wrongly assume someone’s pronouns. Ideally, pronouns will be clearly visible in patients’ medical records and it will be commonplace to ask when they are not provided.”