This movie consists of 214 images acquired by MESSENGER’s Narrow Angle Camera (NAC) on June 8, 2014. The NAC field of view looks toward the horizon along the direction of spacecraft motion as the probe crossed the terminator into night. This view is what a traveler on the MESSENGER spacecraft might see during low-altitude operations over the next eight months. During the final phase of its mission, MESSENGER's science instruments will use low-altitude operations like this to explore the surface and subsurface of Mercury at unprecedented resolution. MESSENGER By the Numbers 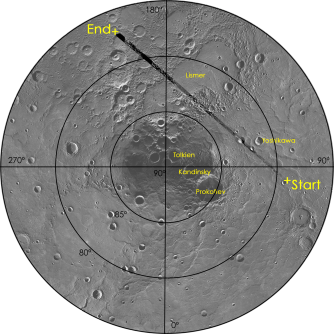 Newswise — Ten years ago, on August 3, 2004, NASA’s MESSENGER spacecraft blasted off from Cape Canaveral, Florida, for a risky mission that would take the small satellite dangerously close to Mercury’s surface, paving the way for an ambitious study of the planet closest to the Sun. The spacecraft travelled 4.9 billion miles (7.9 billion kilometers) — a journey that included 15 trips around the Sun and flybys of Earth once, Venus twice, and Mercury three times — before it was inserted into orbit around its target planet in 2011.

“We have operated successfully in orbit for more than three Earth years and more than 14 Mercury years as we celebrate this amazing 10th anniversary milestone,” said MESSENGER Mission Operations Manager Andy Calloway, of the Johns Hopkins University Applied Physics Laboratory (APL). “The MESSENGER spacecraft operates in one of the most challenging and demanding space environments in our Solar System, and we have met that challenge directly through innovation and hard work, as exemplified by the stunning discoveries and data return achievements. Our only regret is that we have insufficient propellant to operate another 10 years, but we look forward to the incredible science returns planned for the final eight months of the mission.”

MESSENGER is only the second spacecraft sent to Mercury. Mariner 10 flew past it three times in 1974 and 1975 and gathered detailed data on less than half the surface. MESSENGER took advantage of an ingenious trajectory design, lightweight materials, and miniaturization of electronics, all developed in the three decades since Mariner 10 flew past Mercury.

“It was quite challenging to design and execute a trajectory that could culminate in Mercury orbit,” said Mission and Spacecraft Systems Engineer Dan O’Shaughnessy, of APL. “Designing an attendant spacecraft that was light enough to carry the necessary propellant to execute such a trajectory with enough room left over for a payload capable of global characterization of the planet is an impressive accomplishment.”

Additionally, he said, “the team’s concept of operations that streamlines planning while optimizing the use of our payload — despite substantial thermal and power constraints — is an amazing feat.”

MESSENGER Deputy Principal Investigator Larry Nittler, of the Carnegie Institution of Washington, said that the mission has rewritten scientists’ understanding of the planet “and given us plenty of surprises.”

For instance, he said geochemical measurements have revealed a surface poor in iron, but rich in moderately volatile elements such as sulfur and sodium. “These results rule out some long-standing theories put forward to explain Mercury’s anomalously high density compared with the other planets in the inner solar system,” he explained. “Maps of elemental abundances show that the interior is highly chemically heterogeneous, providing important clues to the early geological history of the planet.”

MESSENGER observations have also shown that Mercury’s surface was shaped by volcanic activity, identified unique landforms shaped by loss of volatile materials, and confirmed the presence of large amounts of water ice protected from the Sun’s heat within permanently shadowed impact craters near the planet’s poles, Nittler said.

“We have found that the complex interplay of the interplanetary magnetic field with that of Mercury results in a remarkably dynamic electromagnetic environment surrounding the planet, including unexplained bursts of electrons and highly variable distributions of different elements in the thin exosphere,” Nittler added. “Over the next few months, MESSENGER will observe Mercury at lower altitudes and thus smaller spatial scales than ever before, and this is sure to result both in exciting scientific discoveries and new puzzles about our solar system’s enigmatic innermost planet.”

In celebration of the 10th anniversary of its launch, the MESSENGER team has released a movie acquired during an early stage of MESSENGER’s low-altitude campaign. The movie was assembled from 214 images taken by the narrow-angle camera (NAC) on June 8. It offers a bird’s-eye view of what the spacecraft sees as it flies over the planet at close range. The NAC’s field of view looked toward the horizon along the direction of MESSENGER's motion as the probe crossed the terminator into night.

The image frames were taken once per second while MESSENGER was at altitudes ranging from 115 to 165 kilometers, traveling at a speed of 3.7 kilometers per second relative to the surface. The movie is sped up by a factor of six for ease of viewing. The images have resolutions ranging from 21 to 45 meters/pixel. Higher-resolution images of Mercury’s surface are possible if the camera is pointed directly below the spacecraft rather than looking to the horizon, and such operations will be the routine approach for low-altitude imaging in the coming year.

The movie starts in the far north, east of the large crater Gaudí, passes over two unnamed craters just north of the crater Yoshikawa, over the large impact basin Lismer, north of the crater Van Dijck, and ends in the plains between the craters Nizami and Jókai. Many craters in this polar region are believed to host water ice in their permanently shadowed interiors.

This figure highlights the flight path of MESSENGER during its acquisition of images used in the flyover movie. This mosaic provides a close-up view, at 50 meters/pixel, of the surface MESSENGER imaged for the creation of the video.

“Our spacecraft team is delighted to celebrate the 10th anniversary of MESSENGER’s launch,” adds MESSENGER Principal Investigator Sean Solomon, of Columbia University’s Lamont-Doherty Earth Observatory. “In the past decade, observations by our resilient probe have deepened our understanding of both rocky planets and the dynamics of the inner heliosphere. As the new video demonstrates, however, some of the most exciting observations from the mission are still to come. We can expect new surprises as we view the innermost planet and its environment from closer range than ever before achieved by spacecraft.” Caption: MESSENGER By the Numbers 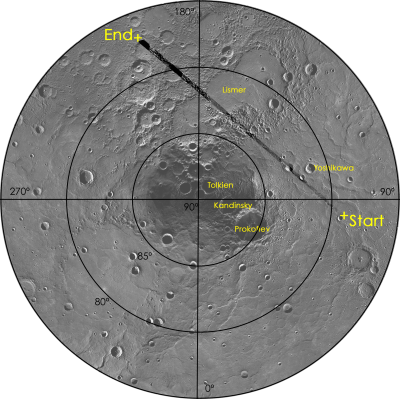