30-May-2017 1:00 PM EDT, by Perelman School of Medicine at the University of Pennsylvania contact patient services
favorite_border 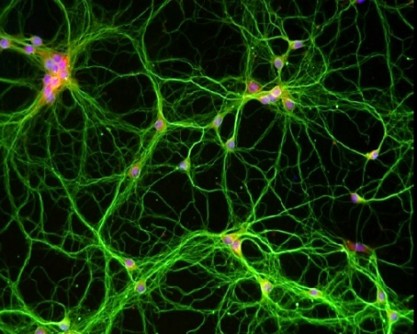 Primary neurons from hippocampus isolated from a mouse embryo. Axons are green and nuclei are stained blue and ACSS2 is red, with overlap in pink-purple.

Newswise — PHILADELPHIA – Understanding how memories are made, retrieved, and eventually fade over a lifetime is the stuff of poems and song. To medical researchers, solving the mysteries of memory is even more elusive. Researchers surmise that “laying down” a new memory and storing an old memory both involve making proteins at the space, or synapse, where one neuron meets another. But forming these also requires new gene expression in the cell nucleus, where DNA is stored and genes are “read” to establish cell-specific functions.

Now, researchers from the Perelman School of Medicine at the University of Pennsylvania have discovered, in the mouse brain, that a key metabolic enzyme works directly within the nucleus of neurons to turn genes on or off when new memories are being established. Their findings are published online this week in Nature.

“This enzyme, called acetyl-CoA synthetase 2, or ACSS2, ‘fuels' a whole machinery of gene expression ‘on site’ in the nucleus of nerve cells to turn on key memory genes after learning,” said senior author Shelley L. Berger, PhD, the Daniel S. Och University Professor in the departments Cell and Developmental Biology and Biology and director of the Penn Epigenetics Program. “We found both direct gene-association of ACSS2 and a role for it in neurons to regulate learning and memory – two completely unanticipated novel discoveries.”

This study provides a new target for neuropsychiatric disorders, such as anxiety and depression, where neuro-epigenetic mechanisms are known to key, said first author Philipp Mews, PhD, a former graduate student in the Berger lab who is now a postdoctoral fellow at the Friedman Brain Institute of the Icahn School of Medicine at Mount Sinai in New York City. “We suspect,” Mews says, “that ACSS2 might play a role in memory impairment in neurodegenerative disorders.”

Forming memories involves restructuring of the synapse, which relies on the coordinated expression of a group of memory genes. The addition of a chemical group, a process called acetylation, onto specific spots of the genome in neurons, opens up tightly-wound DNA to make genes involved in memory formation available to be “read,” and eventually, for their encoded proteins to be made.

Epigenetic mechanisms in neurobiology – the addition or subtraction of the chemical groups that influence gene expression – are becoming better understood as important regulators of the many functions of different neurons. In the new study, the Penn team found that the enzyme ACSS2 binds to memory genes in neurons to directly regulate and fuel their acetylation, which is ultimately controlling spatial memory in mice.

The researchers started with neuron cell cultures and found that ACSS2 increases in the nuclei of differentiating neurons and gathers near sites of elevated histone acetylation on genes that are highly expressed. At the same time, a decrease in ACSS2 lowers acetyl-CoA levels in the nucleus and acetylation, and therefore lowers expression of the memory genes.

Next, working in mice, the team found that if the animals’ ACSS2 expression was blocked, long-term memory of where objects were placed in a study chamber was impaired. These mice did not investigate a moved object on the second day of a two-day trial, while control group mice did. “This is because, without ACSS2, the mice had no molecular path to engage memory genes to lock in where the objects were placed,” Mews said. In turn, this decrease in ACSS2 in specific brain regions impairs the read-out of key genes that function to form new memories or to update old ones.

In the future, Mews and Berger hope to apply this newfound memory path to prevent the “laying-down” of traumatic memories -- or perhaps even erase them -- in people who suffer from post-traumatic stress disorder, by blocking ACSS2 in the hippocampus, a brain region that processes long-term memory.