Simulation shows how the expansion and contraction of hydrogel materials could propel a micro-swimmer. The simulation also shows how light could deform a steering flap to guide the micro-robot. 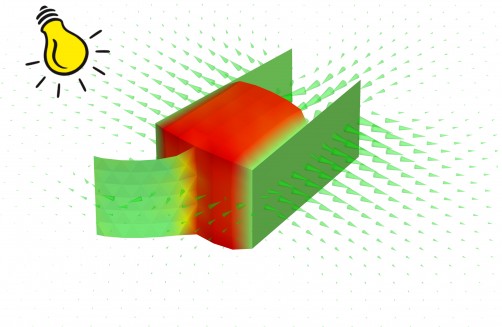 Newswise — When you’re just a few microns long, swimming can be difficult. At that size scale, the viscosity of water is more like that of honey, and momentum can’t be relied upon to maintain forward motion.

Microorganisms, of course, have evolved ways to swim in spite of these challenges, but tiny robots haven’t quite caught up. Now a team of researchers at the Georgia Institute of Technology has used complex computational models to design swimming micro-robots that could overcome these challenges to carry cargo and navigate in response to stimuli such as light.

When they’re actually built some day, these simple micro-swimmers could rely on volume changes in unique materials known as hydrogels to move tiny flaps that will propel the robots. The micro-devices could be used in drug delivery, lab-on-a-chip microfluidic systems – and even as micro-construction robots working in swarms.

The simple micro-swimmers were described July 23 in the online advance edition of the journal Soft Matter, published by the Royal Society of Chemistry in the United Kingdom.

“We believe that our simulations will give experimentalists a reason to pursue development of these micro-swimmers to go beyond what is available now,” said Alexander Alexeev, an assistant professor in the George W. Woodruff School of Mechanical Engineering at Georgia Tech. “We wanted to demonstrate the principle of how robots this small could move by determining what is important and what would need to be used to build a real system.”

The simple swimmer designed by Alexeev and collaborators Hassan Masoud and Benjamin Bingham consists of a responsive gel body about ten microns long with two propulsive flaps attached to opposite sides. A steering flap sensitive to specific stimuli would be located at the front of the swimmer.

The responsive gel body would undergo periodic expansions and contractions triggered by oscillatory chemical reactions, oscillating magnetic or electric fields, or by cycles of temperature change. These expansions and contractions – the chemical swelling and de-swelling of the material – would create a beating motion in the rigid propulsive flaps attached to each side of the micro-swimmer. Combined with the movement of the gel body, the beating motion would move the micro-swimmer forward.

The trajectory of the micro-swimmer would be controlled by a flexible steering flap on its front. The flap would be made of a material that deforms based on changes in light intensity, temperature or magnetic field.

“The combination of these flaps and the oscillating body creates a very nice motion that we believe can be used to propel the swimmer,” said Alexeev. “To build a device that is autonomous and self-propelling at the micron-scale, we cannot build a tiny submarine. We have to keep it simple.”

Key to the operation of the micro-swimmer would be the latest generation of hydrogels, materials whose volume changes in a cyclical way. The hydrogels would serve as “chemical engines” to provide the motion needed to move the device’s propulsive flaps. Such materials currently exist and are being improved upon for other applications.

“We are using the state-of-the art in materials science, changing the properties of the material,” explained Masoud, a Ph.D. candidate in the School of Mechanical Engineering. “We have combined the materials with the principles of hydrodynamics at the small scale to develop this new swimmer.”

As part of their modeling, the researchers examined the effects of flaps of different sizes and properties. They also studied how flexible the micro-swimmer’s body needed to be to produce the kind of movement needed for swimming.

The computational fluid modeling the researchers used allowed them to study a wide range of parameters in materials, oscillation rates and flexibility. What they learned, Alexeev said, will give experimentalists a starting point for actually building prototypes of the flexible gel robots.

“We have captured the solid mechanics of the periodically-oscillating body, the fluid dynamics of moving through the viscous liquid, and the coupling between the two,” he said. “From a computational fluid dynamics standpoint, it’s not an easy problem to model at this scale.”

Ultimately, the researchers hope to work with an experimental team to actually build the micro-swimmers. Combining their theoretical work with actual experiments could be a powerful approach to building robots on this size scale.

“This is a simulation that we hope to see in real life one day,” Alexeev said. “We have learned how experimentalists can pursue fabrication of these devices without extensive trial-and-error. We can use the simulations to look inside what will happen by using the laws of physics to explain it.”

The researchers envision groups of micro-swimmers carrying cargo through microfluidic chips or other devices. Swarms of them could one day work together as tiny construction robots moving materials to desired locations for assembly.

But the micro-swimmers won’t win any Olympic competitions. Alexeev estimates that their top speed could be on the order of a few micrometers per second – which should be enough to accomplish their mission.

“If your body is micrometers in size, that kind of speed is really not too bad,” he said. “The swimming speed will be rather slow, but at that size scale, you don’t really need to go very fast since you only need to go short distances.”