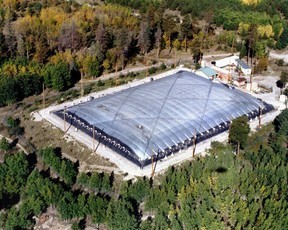 Newswise — The University of Maryland-led Milagro collaboration, comprised of scientists from 16 institutions across the United States, has discovered two nearby regions with an unexpected excess of cosmic rays.

This is the second finding of a source of galactic cosmic rays relatively near Earth announced in the past week. In the November 20 issue of the journal Nature, ATIC an international experiment lead by LSU scientists and conceived by a University of Maryland physicist announced finding an unexpected surplus of cosmic-ray electrons from an unidentified, but relatively close source.

"These two results may be due to the same, or different, astrophysical phenomenon, said Jordan Goodman, a University of Maryland professor of physics and principal investigator for Milagro. However, they both suggest the presence of high-energy particle acceleration in the vicinity of the earth. Our new findings [published in the November 24 issue of Physical Review Letters] point to general locations for the localized excesses of cosmic-ray protons observed with the Milagro observatory.

Cosmic rays are actually charged particles, including protons and electrons that are accelerated to high energies from sources both outside and inside our galaxy. It's unknown exactly what these sources are, but scientists theorize they may include supernovae -- massive stars that explode -- quasars or perhaps from other even more exotic, less-understood sources within the universe. Until recently, it was widely held that cosmic-ray particles came toward Earth uniformly from all directions. These new findings are the strongest indications yet that the distribution of cosmic rays is not so uniform.

When these high energy cosmic ray particles strike the Earth's atmosphere, a large cascade of secondary particles are created in an extensive "air shower." The Milagro observatory -- located in a 60m x 80m x 8m covered pond in the Jemez Mountains near Los Alamos, New Mexico -- 'sees' cosmic rays by observing the energetic secondary particles that make it to the surface.

This allowed researchers for the first time to see statistical peaks in the number of cosmic-ray events originating from relatively small regions of the sky. Milagro observed an excess of cosmic ray protons in an area above and to the right of Orion, near the constellation Taurus. The other hot spot is a comma-shaped region in the sky near the constellation Gemini.

"Whatever the source of the protons we observed with Milagro, their path to Earth is deflected by the magnetic field of the Milky Way so that we cannot directly tell exactly where they originate," said Goodman. "And whether the regions of excess seen by Milagro actually point to a source of cosmic rays, or are the result of some other unknown nearby effect is an important question raised by our observations."

Even more revelatory observations of cosmic rays and further help solving the mystery of the origin of cosmic rays may come in the form of a new observatory that Jordan and his fellow U.S. Milagro scientists have partnered with colleagues in Mexico to propose to the National Science Foundation. This second-generation experiment named the High Altitude Water Cherenkov experiment (HAWC) would be built at a high-altitude site in Mexico.

The Advanced Thin Ionization Calorimeter (ATIC) is an investigation directed to resolving fundamental questions about the shape of the elemental differential energy spectra from the low energy region through the highest practical energies. This ATIC investigation takes advantage of the existing NASA long-duration balloon flight capability in Antarctica and/or the Northern Hemisphere (e.g. Fairbanks). More at: http://www.atic.umd.edu/atic.html