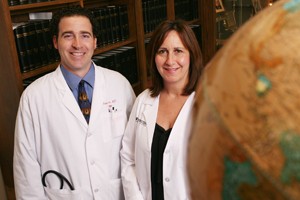 Urologists Dr. Margaret Pearle (right) and Dr. Yair Lotan have helped discover that in coming decades global warming is likely to increase the proportion of the U.S. population affected by kidney stones. The researchers predict that by 2050, higher temperatures will cause an additional 1.6 million to 2.2 million kidney-stone cases, representing up to a 30 percent growth in some areas.

Newswise — Global warming is likely to increase the proportion of the population affected by kidney stones by expanding the higher-risk region known as the "kidney-stone belt" into neighboring states, researchers at UT Southwestern Medical Center and UT Dallas have found.

Dehydration is one of the risk factors linked to kidney-stone disease, and the paper suggests global warming will exacerbate this effect. The researchers predict that by 2050, higher temperatures will cause an additional 1.6 million to 2.2 million kidney-stone cases, representing up to a 30 percent growth in some areas.

"This study is one of the first examples of global warming causing a direct medical consequence for humans," said Dr. Margaret Pearle, professor of urology at UT Southwestern and senior author of the paper, which appears in today's issue of Proceedings of the National Academy of Sciences.

"There is a known geographic variation in stone disease that has been attributed to regional differences in temperature," said Dr. Pearle. "When people relocate from areas of moderate temperature to areas with warmer climates, a rapid increase in stone risk has been observed. This has been shown in military deployments to the Middle East for instance."

Kidney-stone disease, or nephrolithiasis, is a common ailment. Kidney stones, which are solid crystals that form from dissolved minerals in urine, can be caused by both environmental and metabolic problems. Low volume of urine directly increases stone risk by increasing the concentration of stone-forming salts. They can arise from either taking in too little fluid or losing too much through dehydration.

Kidney-stones are more common in the warmer parts of the U.S. The Southeast is known as the "kidney-stone belt" because of the high incidence of kidney stones in the population living in Alabama, Arkansas, Florida, Georgia, Louisiana, Mississippi, North Carolina, South Carolina and Tennessee.

To forecast climate change, Dr. Tom Brikowski, lead author of the study and associate professor of geosciences at UT Dallas, used models of global warming obtained from the Intergovernmental Panel on Climate Change's 2007 Fourth Assessment Report, in which predicted temperature increases are based on expectations of future greenhouse gases.

Using two studies that reported kidney-stone rates in various geographic regions and correlating regional stone rates with local mean annual temperatures, the investigators were able to derive two mathematical models relating temperature to kidney-stone risk. Both models of kidney-stone risk predicted that the current kidney-stone belt will expand with global warming, although the exact extent and location of the change was different. One model predicted that the increase will be concentrated in the southern half of the country, while the other model pointed to an increase in the upper Midwest. Taking into account the estimated future populations in those areas, increased temperatures are predicted to cause 1 million to 2 million more cases of kidney-stone disease.

"Obviously, this escalation is a problem when considering the costs associated with treating kidney-stone disease," said co-author Dr. Yair Lotan, assistant professor of urology at UT Southwestern. "Nationwide, the cost of treating these new kidney-stone cases could rise as high as $1 billion."

Similar climate-related changes in the prevalence of kidney-stone disease can be expected in other stone belts worldwide. Dr. Pearle and her colleagues plan to conduct future studies to understand the exact correlation of urine volume with environmental temperature.