16-May-2022 6:05 AM EDT, by Uniformed Services University of the Health Sciences (USU)
favorite_border 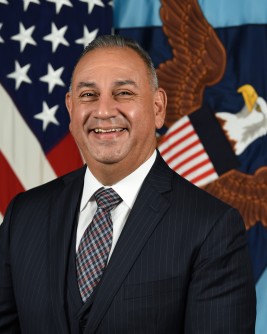 The Under Secretary of Defense for Personnel and Readiness, the Honorable Gilbert R. Cisneros, Jr., will deliver the keynote address during the Uniformed Services University's commencement ceremony on May 21, Armed Forces Day.

Newswise — Bethesda, Md. – The Under Secretary of Defense for Personnel and Readiness, the Honorable  Gilbert R. Cisneros, Jr., will address more than 340 uniformed professionals and their guests on May 21, Armed Forces Day, as they receive their medical, graduate nursing and dental, biomedical science, public health, and clinical psychology degrees from the Uniformed Services University of the Health Sciences (USU).

The University was founded in 1972 and is celebrating its 50th anniversary in 2022. The Golden Anniversary commencement ceremony will take place at the Daughters of the American Revolution (DAR) Constitution Hall in Washington, D.C.

Cisneros serves as the principal staff assistant and advisor to the Secretary of Defense for force readiness, force management, health affairs, National Guard and Reserve component affairs, education and training, and military and civilian personnel requirements and management, including equal opportunity, morale, welfare, recreation, and quality of life matters. He is a former military officer, philanthropist, veterans advocate, and Member of Congress who has been recognized for his career-long service. Most recently, he received an award from the United States Navy Memorial for his service to the nation, and was recognized by the U.S. Chamber of Commerce with their Abraham Lincoln Award for his bipartisan work in the House of Representatives on behalf of small businesses.

During USU’s commencement exercise on Saturday, students will enter DAR Constitution Hall to “Pomp and Circumstance” performed by “The President’s Own” U.S. Marine Corps Band. The graduates are a mix of military and civilian students.  The uniformed students are active duty officers in the U.S. Army, Navy, Air Force, Public Health Service, and for the first time ever, Coast Guard. Military medical students will walk across the stage wearing their academic regalia, and after receiving their diplomas, will leave the stage and change into their military uniforms. They will return to recite their respective Service commissioning oath, led individually by each service Surgeon General or his/her representative, and will then be promoted to the next rank.

About the Uniformed Services University of the Health Sciences: The Uniformed Services University of the Health Sciences, founded by an act of Congress in 1972, is the nation’s federal health sciences university and the academic heart of the Military Health System. USU students are primarily active-duty uniformed officers in the Army, Navy, Air Force and Public Health Service who receive specialized education in tropical and infectious diseases, TBI and PTSD, disaster response and humanitarian assistance, global health, and acute trauma care. USU also has graduate programs in oral biology, biomedical sciences and public health committed to excellence in research. The University's research program covers a wide range of areas important to both the military and public health. For more information about USU and its programs, visit www.usuhs.edu.