More Than 40 Years After First Arriving at Swarthmore, Charles "Kip" Davis '75 to Graduate

CNewswise — harles “Kip” Davis, who left Swarthmore in 1975 just shy of a degree, has had a mantra throughout the past year.

Davis was 62, the same age at which his father passed away. He had witnessed his daughter overcome adversity to graduate from Wesleyan, and now his son was pushing through learning difficulties to give college another shot.

Davis had thrived in market research and thrown himself into leadership positions with an array of educational and community organizations, and still, he felt a void. The words of Lee Devin, his modern drama professor at Swarthmore, reverberated:

It’s very important to finish, because it’s hard on your character if you don’t.

“For the longest time, I didn't understand what he meant,” says Davis, a senior account manager of the international firm Ipsos. “But I’ve realized that not having a degree limited me in strange and unexpected ways. More than I would ever have acknowledged.”

Davis had reconnected with the College in 2008, through Lifelong Learning classes in New York — “a great stimulus to be around Swarthmore students again and feel that I did, in fact, belong in that community.” And he had maintained friendships with former professors and classmates. But he felt that his intellectual capacity, his Swattie superpower, “had a hole in it.”

As one of the founders of the Swarthmore Black Alumni Network (SBAN) and a member of the Alumni Council, Davis met with prospective and current students on campus. But he considered it “intellectually dishonest” to advise them without having graduated.

“It just came to a point where I felt I was cheating myself and my ability to do the things I cared about passionately,” says Davis. “So finally I reached out to [College Registrar Martin Warner] in July — what do I need to do?”

It had been a long time, Warner responded, and not all of Davis’ records had been digitized. So there was one pressing question: Have you fulfilled your physical education requirement?

“Oh yes, I told him,” Davis says, laughing. “That swim test, too! Because the prospect of doing that at age 63 wasn’t something I was excited about.”

But what actually stood between Davis and his diploma in sociology & anthropology was the senior thesis. So Warner connected him with the department chair, Sarah Willie-LeBreton, who agreed to advise him even though she would be on a sabbatical.

In an early email exchange, Willie-LeBreton had three pieces of advice. One, focus on something you care deeply about. Two, see if anything that you’ve already written will apply. And three, at once warmly and firmly, “you should finish.”

Off Davis went, then, on what would prove a deeply personal journey. 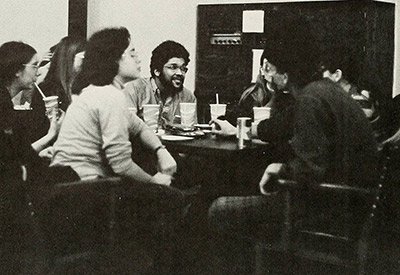 "At the Tarble snack bar after ensemble acting class," Davis (middle) says of this shot from the 1974 Halycon.

Before Davis could get started, he faced prerequisites.

“One was buying a desk, and two was having my daughter move out so the desk could go in her room,” he says.

The third was making it clear he didn’t want to be treated differently than any other thesis writer.

“He wanted to fully experience the process and have a real back and forth with an advisor,” says Willie-LeBreton. “It was just great to hear that level of enthusiasm.”

Next, he needed a topic. He considered revisiting his topic from 1975, social change at Howard University, but in a “sad moment” realized he had misplaced his notes. But a Lifelong Learning class with alumni, including Jeffrey Scheuer ’75 and Martha "Marty" Spanninger ’76, and Alexander Griswold Cummins Professor Emeritus of English Literature Philip Weinstein, helped to chart a course.

There, on Martha’s Vineyard, Davis met esteemed Yale sociologist Elijah Anderson, who previously taught at Swarthmore. They talked about Davis’ grandparents buying a summer home at Oak Bluffs, an island enclave rich with African-American history, and Davis’ 60 years of memories there. There’s your thesis, Anderson told him.

Willie-LeBreton, who is friends with Anderson, then introduced Davis to the concept of ethnography. He could explore his own experiences and apply them to sociological trends and themes.

“And so it became very much of a personal experience in recounting my family’s involvement in this community, and our relationship to it,” says Davis, who intertwined that perspective with an analysis of the integration and upward mobility of blacks in the 1960s.

Davis traced his family’s history “with a fine-tooth comb,” says Willie-LeBreton, including his father’s having been denied tenure at Princeton but rising to chair of African-American studies at Yale and coming to Swarthmore as an outside examiner of the Honors Program. “To go moment by moment through his family’s journey, in the context of larger societal change, was, I think, really cathartic for him, and it was incredibly fascinating for me,” Willie-LeBreton says.

Davis worked with Willie-LeBreton over email, on the phone, and in person, and took time off of work to pore over records and interview residents on Martha’s Vineyard. But his larger challenge was overcoming self-doubts over the approach he was taking and the writing process itself.

“She was really encouraging and helpful in that regard, urging me to, you know, just get it out there,” says Davis. “Overcoming the self-doubt to produce stuff for her to read was huge for me, personally, because it’s not that the doubts go away. It’s all about your ability to overcome those doubts.”

Davis’ final product was “beautifully written,” says Willie-LeBreton, and it carefully reflected all of the feedback she and Nina Johnson, assistant professor of sociology & anthropology and black studies, provided.

“I feel like over the course of the year, Kip moved from being my student to really being my colleague,” says Willie-LeBreton. “And that’s partly just because he brought a lifetime of wisdom and thoughtfulness to the project, so our conversations could really be mutually enhancing. It was a wonderful gift.”

'I Couldn't Sustain it Emotionally' 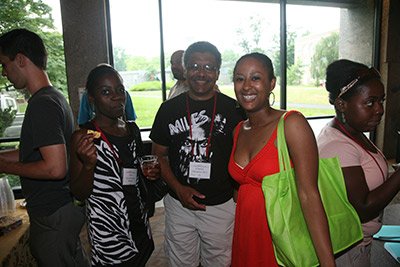 Davis, pictured at Alumni Weekend in 2010, is one of the founders of the Swarthmore Black Alumni Network (SBAN).

Asked why he left Swarthmore without a degree, Davis pauses.

“I was a very passionate student,” he says. “And I think I just stopped being able to handle that. Three months too soon."

Davis was one of the College's first English literature majors to have a concentration in theater, and he explored classes in poetry and African-American literature. But zeroing in on those subjects put him at odds with “the dreaded distribution requirement,” Davis says, which would mean staying on campus for an extra semester before he could graduate.

Before his junior year, Davis had traveled to Stanford for summer school with Scheuer and taken two courses in sociology & anthropology. He realized that by majoring in that subject and writing the senior thesis, he could still graduate from Swarthmore on time. But it wasn't that easy.

“A sound tactical decision,” Davis says, “but because I was a very passionate learner, I couldn't sustain it emotionally.”

And besides, Davis thought, he wanted to do theater after college. What difference would a diploma make, really? Throughout his senior year, Davis could feel himself slipping away from Swarthmore, but he decided that no matter how it unfolded, he would have the last word.

“So, I was actually the senior class president and spoke at graduation,” he says. “Pretty crazy.”

Davis went on to study at the American Conservatory Theater and, among other credits, co-write X: The Life of Times of Malcolm X at the New York City Opera in 1986. He took an array of leadership positions with organizations in his community, including Replications, an educational nonprofit geared to under-served communities, and the Harlem Little League.

He maintained his ties with the College along the way, however, organizing, attending, and serving on panel discussions for Alumni Weekend. Classmates who supported his efforts on the thesis are flying in from Boston to celebrate him at Commencement on Sunday, along with other alumni and friends.

Davis' family will be there, too, including his wife and the children who inspire him. His new home office has been “turned over” to his son, as he embarks on his next chapter — but Davis probably hasn’t seen the last of it.

“I’ve always felt like I had more writing to do, but not having completed the thesis held me back internally,” he says. “How can I write the next thing when I haven’t finished the first thing?

“But now? I almost feel like the floodgates are open.”