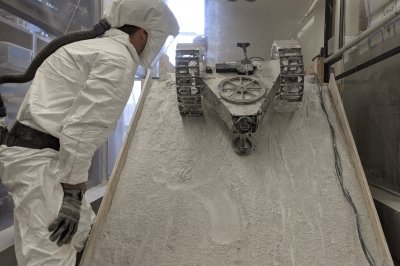 Michigan Tech’s Tethered permanently shadowed Region EXplorer (T-REX) rover would provide reliable power and data to other operations around the lunar polar regions through the use of super conducting cables. 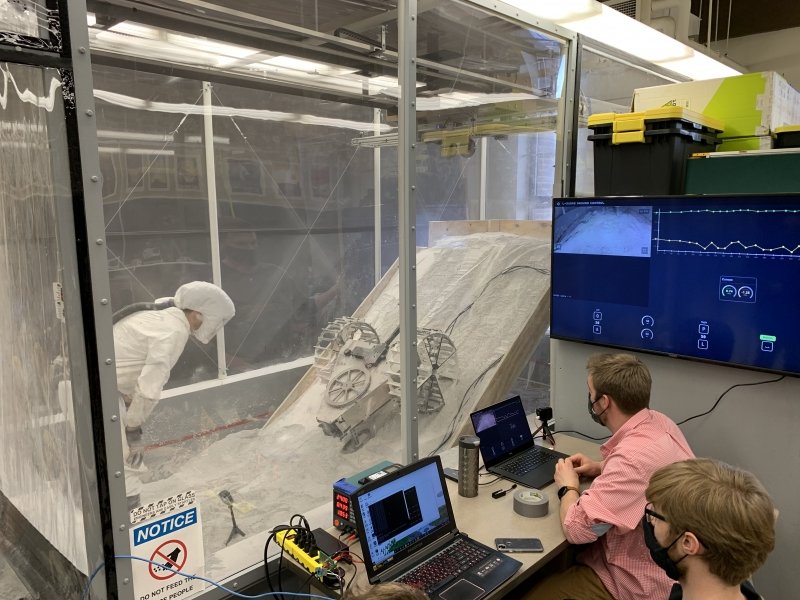 Newswise — Students from Michigan Technological University want to shine a light on the darkest places of the moon. Their design, a rover called Tethered permanently shadowed Region EXplorer (T-REX), deploys a lightweight, superconducting cable to keep other lunar rovers powered and provide wireless communication as they operate in the extreme environments of the moon’s frigid, lightless craters.

Eight university teams competed in the BIG Idea Challenge for 2020, called the Lunar PSR Challenge. The goal? Demonstrating different technologies and designs to study and explore the moon’s permanently shadowed regions (PSRs), which NASA officials note are a formidable challenge for space exploration.

“Think about T-REX as a recharging station and comms tower in a small, portable package,” said Marcello Guadagno, Michigan Tech’s student lead on the project. “The whole time we were holding our breath and cheered when our team was announced as the winner of the competition. This was a major victory for our lab, which was only just founded in 2019.”

NASA awarded nearly $1 million through the BIG Idea grant in February 2020, including $162,637 to the Michigan Tech team. Then the pandemic hit.

“When we think about tenacity, one of our University’s core values, it was important to keep everyone healthy and still move forward with the project,” said Paul Van Susante, assistant professor of mechanical engineering at Michigan Tech and the T-REX team’s faculty adviser. “The pandemic required us to adapt and overcome, and the team rose magnificently to that challenge.”

As the NASA press release notes, “Studying permanently shadowed regions in or near the Moon's poles could help improve understanding of the Moon's history and composition. When NASA lands the first woman and next man at the Moon's South Pole with the Artemis program, new technologies will be needed to allow astronauts to live and work on the Moon for extended missions.”

In addition to the Artemis Award, Michigan Tech’s team received multiple peer awards: the Fly Me to the Moon award, after other university teams voted that Michigan Tech’s team was most likely to go to the moon, and the Above and Beyond award. (As Guadagno puts it, “we broke things and then unbroke them.”) The T-REX crew also got the Welcome Llama for being the most inviting team: Specifically, at the start of the final presentation, some of the Northeastern students accidentally stayed on long, so the Michigan Tech team welcomed them as new Huskies.

The team is part of the “Husky Works” Planetary Surface Technology Development Lab and Van Susante jokes that their work was fueled by a lab stockpile of candy and popsicles. Mostly undergraduates and the youngest team in the competition, the experience has encouraged many of the team members to pursue master’s and doctoral degrees.

Guadagno says the team’s hard work, sugar consumption and creativity has paid off. "This technology can play a key role in enabling a sustainable human presence on the Moon,” he said. “We are proud to be part of the Artemis Generation."

Caption: Michigan Tech’s Tethered permanently shadowed Region EXplorer (T-REX) rover would provide reliable power and data to other operations around the lunar polar regions through the use of super conducting cables.