CRAB NEBULA: THE MULTIWAVELENGTH STRUCTURE OF A PULSAR WIND NEBULA. This visualization features a three-dimensional multiwavelength representation of the Crab Nebula, an iconic remnant of a star that was seen exploding in the year 1054 AD. This is a view looking into the heart of the nebula, home to its rapidly spinning crushed stellar core, called a pulsar. The torrential outflow of radiation from this magnetic dynamo illuminates the nebula. The visualization is based on images from NASA's three Great Observatories: the Chandra X-ray Observatory and the Hubble and Spitzer space telescopes. Observing the nebula across its wide spectrum of energies provides a holistic view of its complex structure. The movie begins by showing the Crab Nebula in context, pinpointing the location of the observed supernova in the constellation Taurus. This view zooms in to present the Hubble, Spitzer, and Chandra images of the Crab Nebula, each highlighting one of the nested structures in the system. The video then begins a slow buildup of the three-dimensional X-ray structure, showing the pulsar and disk of energized material, and adding jets of radiation firing off from opposite sides of the energetic dynamo. Appearing next is a rotating infrared view of a glowing cloud of emission, called synchrotron radiation, enveloping the pulsar system. This distinctive form of radiation occurs when streams of charged particles spiral around the pulsar's magnetic field lines. The visible-light outer shell of the Crab Nebula appears next. Looking like a cage around the entire system, this shell of glowing gas consists of tentacle-shaped filaments of glowing oxygen. The tsunami of particles unleashed by the pulsar is pushing on this expanding debris cloud like an animal rattling its cage. The X-ray, infrared, and visible-light models are combined at the end of the movie to reveal both a rotating three-dimensional multiwavelength view, and the corresponding two-dimensional image of the Crab Nebula. (TRT: 3 minutes, 42 seconds) 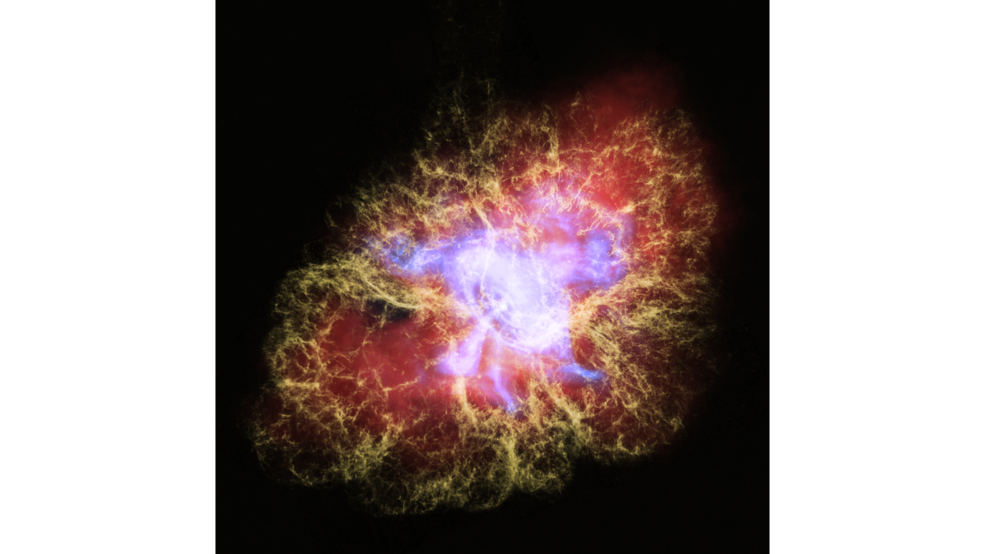 THE GREAT OBSERVATORIES' MULTIWAVELENGTH VIEW OF THE CRAB NEBULA. This new multiwavelength image of the Crab Nebula combines X-ray light from the Chandra X-ray Observatory (in blue) with visible light from the Hubble Space Telescope (in yellow) and infrared light seen by the Spitzer Space Telescope (in red). This particular combination of light from across the electromagnetic spectrum highlights the nested structure of the pulsar wind nebula. The X-rays reveal the beating heart of the Crab, the neutron-star remnant from the supernova explosion seen almost a thousand years ago. This neutron star is the super-dense collapsed core of an exploded star and is now a pulsar that rotates at a blistering rate of 30 times per second. A disk of X-ray-emitting material, spewing jets of high-energy particles perpendicular to the disk, surrounds the pulsar. The infrared light in this image shows synchrotron radiation, formed from streams of charged particles spiraling around the pulsar's strong magnetic fields. The visible light is emission from oxygen that has been heated by higher-energy (ultraviolet and X-ray) synchrotron radiation. The delicate tendrils seen in visible light form what astronomers call a "cage" around the rich tapestry of synchrotron radiation, which in turn encompasses the energetic fury of the X-ray disk and jets. These multiwavelength interconnected structures illustrate that the pulsar is the main energy source for the emission seen by all three telescopes. The Crab Nebula resides 6,500 light-years from Earth in the constellation Taurus.

Newswise — Astronomers and visualization specialists from the NASA's Universe of Learning program have combined the visible, infrared, and X-ray vision of NASA's Great Observatories to create a three-dimensional representation of the dynamic Crab Nebula, the tattered remains of an exploded star.

The multiwavelength computer graphics visualization is based on images from the Chandra X-ray Observatory and the Hubble and Spitzer space telescopes.

The approximately four-minute video dissects the intricate nested structure that makes up this stellar corpse, giving viewers a better understanding of the extreme and complex physical processes powering the nebula. The powerhouse "engine" energizing the entire system is a pulsar, a rapidly spinning neutron star, the super-dense crushed core of the exploded star. The tiny dynamo is blasting out blistering pulses of radiation 30 times a second with unbelievable clockwork precision.

The visualization was produced by a team at the Space Telescope Science Institute (STScI) in Baltimore, Maryland; the Caltech/IPACin Pasadena, California; and the Center for Astrophysics | Harvard & Smithsonian (CfA) in Cambridge, Massachusetts. It will debut at the American Astronomical Society meeting in Honolulu, Hawaii. The movie is available to planetariums and other centers of informal learning worldwide.

"Seeing two-dimensional images of an object, especially of a complex structure like the Crab Nebula, doesn't give you a good idea of its three-dimensional nature," explained STScI's visualization scientist Frank Summers, who led the team that developed the movie. "With this scientific interpretation, we want to help people understand the Crab Nebula's nested and interconnected geometry. The interplay of the multiwavelength observations illuminate all of these structures. Without combining X-ray, infrared, and visible light, you don't get the full picture."

Certain structures and processes, driven by the pulsar engine at the heart of the nebula, are best seen at particular wavelengths.

The movie begins by showing the Crab Nebula in context, pinpointing its location in the constellation Taurus. This view zooms in to present the Hubble, Spitzer, and Chandra images of the Crab Nebula, each highlighting one of the nested structures in the system. The video then begins a slow buildup of the three-dimensional X-ray structure, showing the pulsar and a ringed disk of energized material, and adding jets of particles firing off from opposite sides of the energetic dynamo.

Appearing next is a rotating infrared view of a cloud enveloping the pulsar system, and glowing from synchrotron radiation. This distinctive form of radiation occurs when streams of charged particles spiral around magnetic field lines. There is also infrared emission from dust and gas.

The visible-light outer shell of the Crab Nebula appears next. Looking like a cage around the entire system, this shell of glowing gas consists of tentacle-shaped filaments of ionized oxygen (oxygen missing one or more electrons). The tsunami of particles unleashed by the pulsar is pushing on this expanding debris cloud like an animal rattling its cage.

The three-dimensional structures serve as scientifically informed approximations for imagining the nebula. "The three-dimensional views of each nested structure give you an idea of its true dimensions," Summers said. "To enable viewers to develop a complete mental model, we wanted to show each structure separately, from the ringed disk and jets in stark relief, to the synchrotron radiation as a cloud around that, and then the visible light as a cage structure surrounding the entire system."

These nested structures are particular to the Crab Nebula. They reveal that the nebula is not a classic supernova remnant as once commonly thought. Instead, the system is better classified as a pulsar wind nebula. A traditional supernova remnant consists of a blast wave, and debris from the supernova that has been heated to millions of degrees. In a pulsar wind nebula, the system's inner region consists of lower-temperature gas that is heated up to thousands of degrees by the high-energy synchrotron radiation.

"It is truly via the multiwavelength structure that you can more cleanly comprehend that it's a pulsar wind nebula," Summers said. "This is an important learning objective. You can understand the energy from the pulsar at the core moving out to the synchrotron cloud, and then further out to the filaments of the cage."

Summers and the STScI visualization team worked with Robert Hurt, lead visualization scientist at IPAC, on the Spitzer images; and Nancy Wolk, imaging processing specialist at the Chandra X-ray Center at the CfA, on the Chandra images. Their initial step was reviewing past research on the Crab Nebula, an intensely studied object that formed from a supernova seen in 1054 by Chinese astronomers.

Starting with the two-dimensional Hubble, Spitzer, and Chandra images, the team worked with experts to analyze the complex nested structures comprising the nebula and identify the best wavelength to represent each component. The three-dimensional interpretation is guided by scientific data, knowledge, and intuition, with artistic features filling out the structures.

The visualization is one of a new generation of products and experiences being developed by the NASA's Universe of Learning program. The effort combines a direct connection to the science and scientists of NASA's Astrophysics missions with attention to audience needs to enable youth, families, and lifelong learners to explore fundamental questions in science, experience how science is done, and discover the universe for themselves.

This video demonstrates the power of multiwavelength astronomy. It helps audiences understand how and why astronomers use multiple regions of the electromagnetic spectrum to explore and learn about our universe.

For Crab Nebula release images, video, and more information about the NASA's Universe of Learning program and Hubble, visit: