This video is an animated zoom into the location of the immense spiral galaxy UGC 2885. We begin with a view of the autumn northern constellation Perseus. We look across 232 million light-years of space to see the full expanse of the galaxy, which is over two times the width of our Milky Way galaxy and contains at least 1 trillion stars. TRT=32 seconds 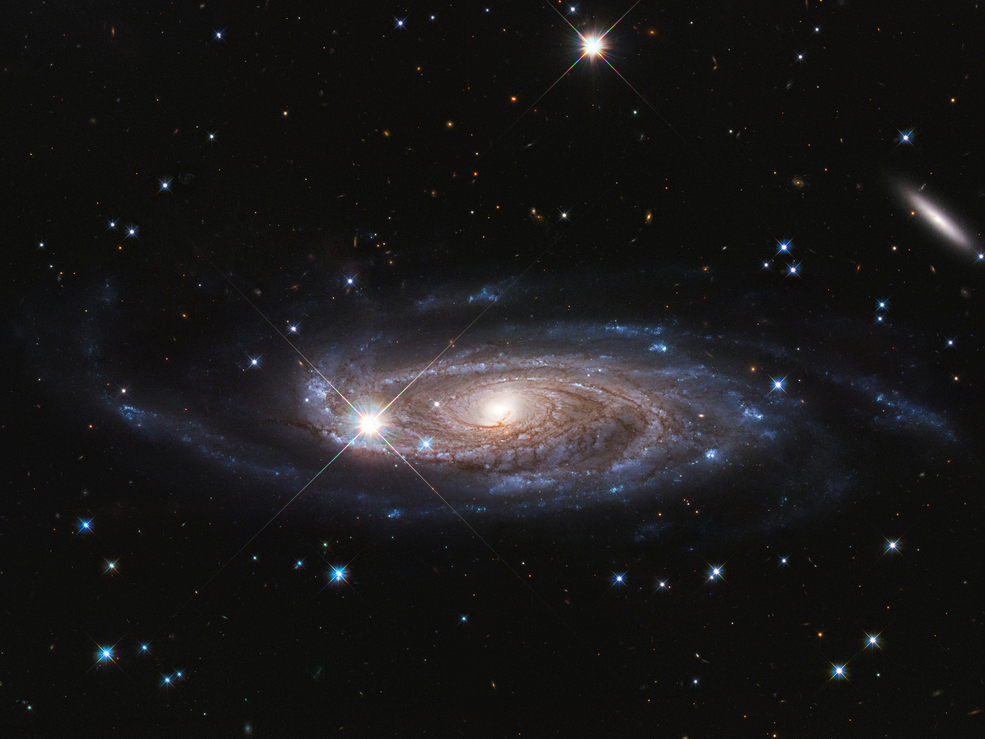 Credit: NASA, ESA, and B. Holwerda (University of Louisville)

This Hubble Space Telescope photograph showcases the majestic spiral galaxy UGC 2885, located 232 million light-years away in the northern constellation Perseus. The galaxy is 2.5 times wider than our Milky Way and contains 10 times as many stars. A number of foreground stars in our Milky Way can be seen in the image, identified by their diffraction spikes. The brightest star photobombs the galaxy's disk. The galaxy has been nicknamed "Rubin's galaxy," after astronomer Vera Rubin (1928 – 2016), who studied the galaxy's rotation rate in search of dark matter.

Newswise — This majestic spiral galaxy might earn the nickname the "Godzilla Galaxy" because it may be the largest known in the local universe. The galaxy, UGC 2885, is 2.5 times wider than our Milky Way and contains 10 times as many stars.

But it is a "gentle giant," say researchers, because it looks like it has been sitting quietly over billions of years, possibly sipping hydrogen from the filamentary structure of intergalactic space. This fuels modest ongoing star birth at half the rate of our Milky Way. In fact, its supermassive central black hole is a sleeping giant, too; because the galaxy does not appear to be feeding on much smaller satellite galaxies, it is starved of infalling gas.

The galaxy has been nicknamed "Rubin’s galaxy," after astronomer Vera Rubin (1928 – 2016) by Benne Holwerda of the University of Louisville, Kentucky, who observed the galaxy with NASA's Hubble Space Telescope.

"My research was in a large part inspired by Vera Rubin's work in 1980 on the size of this galaxy." Rubin measured the galaxy's rotation, which provides evidence for dark matter, which makes up most of the galaxy's mass as measured by the rotation rate. "We consider this a commemorative image. This goal to cite Dr. Rubin in our observation was very much part of our original Hubble proposal."

In results being presented at the winter American Astronomical Society meeting in Honolulu, Hawaii, Holwerda is seeking to understand what led to the galaxy's monstrous size. "How it got so big is something we don't quite know yet," said Holwerda. "It's as big as you can make a disk galaxy without hitting anything else in space."

One clue is that the galaxy is fairly isolated in space and doesn't have any nearby galaxies to crash into and disrupt the shape of its disk.

Did the monster galaxy gobble up much smaller satellite galaxies over time? Or did it just slowly accrete gas for new stars? "It seems like it's been puttering along, slowly growing," Holwerda said. Using Hubble's exceptional resolution, his team is counting the number of globular star clusters in the galaxy's halo — a vast shell of faint stars surrounding the galaxy. An excess of clusters would yield evidence that they were captured from smaller infalling galaxies over many billions of years.

NASA's upcoming James Webb Space Telescope could be used to explore the center of this galaxy as well as the globular cluster population. NASA's planned Wide Field Infrared Survey Telescope (WFIRST) would give an even more complete census of this galaxy's cluster population, especially that of the whole halo. "The infrared capability of both space telescopes would give us a more unimpeded view of the underlying stellar populations," said Holwerda. This complements Hubble's visible-light ability to track wispy star formation throughout the galaxy.

A number of foreground stars in our Milky Way can be seen in the image, identified by their diffraction spikes. The brightest appears to sit on top of the galaxy's disk, though UGC 2885 is really 232 million light-years farther away. The giant galaxy is located in the northern constellation Perseus.

Credit: NASA, ESA, and B. Holwerda (University of Louisville)

For image files of galaxy UGC 2885 and more information about Hubble, visit: