Webb’s enormous mirror and precision instrumentation join forces to capture the most detailed spectrum of an exoplanet atmosphere to date. 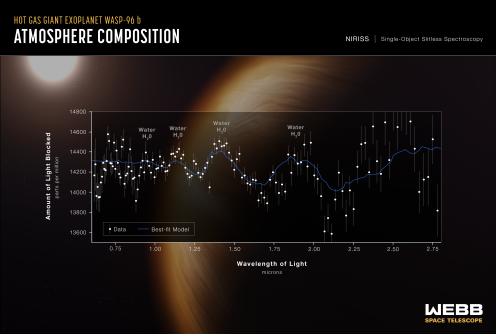 A transmission spectrum made from a single observation using Webb’s Near-Infrared Imager and Slitless Spectrograph (NIRISS) reveals atmospheric characteristics of the hot gas giant exoplanet WASP-96 b. A transmission spectrum is made by comparing starlight filtered through a planet’s atmosphere as it moves across the star, to the unfiltered starlight detected when the planet is beside the star. Each of the 141 data points (white circles) on this graph represents the amount of a specific wavelength of light that is blocked by the planet and absorbed by its atmosphere. In this observation, the wavelengths detected by NIRISS range from 0.6 microns (red) to 2.8 microns (in the near-infrared). The amount of starlight blocked ranges from about 13,600 parts per million (1.36 percent) to 14,700 parts per million (1.47 percent). Researchers are able to detect and measure the abundances of key gases in a planet’s atmosphere based on the absorption pattern—the locations and heights of peaks on the graph: each gas has a characteristic set of wavelengths that it absorbs. The temperature of the atmosphere can be calculated based in part on the height of the peaks: a hotter planet has taller peaks. Other characteristics, like the presence of haze and clouds, can be inferred based on the overall shape of different portions of the spectrum. The gray lines extending above and below each data point are error bars that show the uncertainty of each measurement, or the reasonable range of actual possible values. For a single observation, the error on these measurements is remarkably small. The blue line is a best-fit model that takes into account the data, the known properties of WASP-96 b and its star (e.g., size, mass, temperature), and assumed characteristics of the atmosphere. Researchers can vary the parameters in the model – changing unknown characteristics like cloud height in the atmosphere and abundances of various gases – to get a better fit and further understand what the atmosphere is really like. The difference between the best-fit model shown here and the data simply reflects the additional work to be done in analyzing and interpreting the data and the planet. Although full analysis of the spectrum will take additional time, it is possible to draw a number of preliminary conclusions. The labeled peaks in the spectrum indicate the presence of water vapor. The height of the water peaks, which is less than expected based on previous observations, is evidence for the presence of clouds that suppress the water vapor features. The gradual downward slope of the left side of the spectrum (shorter wavelengths) is indicative of possible haze. The height of the peaks along with other characteristics of the spectrum is used to calculate an atmospheric temperature of about 1350°F (725°C). This is the most detailed infrared exoplanet transmission spectrum ever collected, the first transmission spectrum that includes wavelengths longer than 1.6 microns at such high resolution and accuracy, and the first to cover the entire wavelength range from 0.6 microns (visible red light) to 2.8 microns (near-infrared) in a single shot. The speed with which researchers have been able to make confident interpretations of the spectrum is further testament to the quality of the data. The observation was made using NIRISS’s Single-Object Slitless Spectroscopy (SOSS) mode, which involves capturing the spectrum of a single bright object, like the star WASP-96, in a field of view 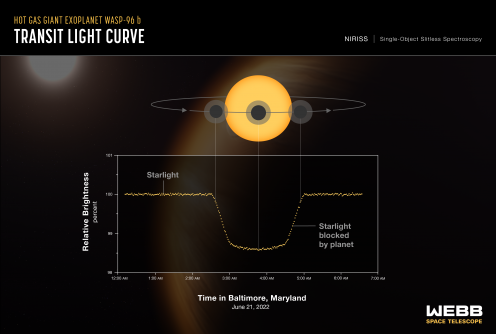 A light curve from Webb’s Near-Infrared Imager and Slitless Spectrograph (NIRISS) shows the change in brightness of light from the WASP-96 star system over time as the planet transits the star. A transit occurs when an orbiting planet moves between the star and the telescope, blocking some of the light from the star. This observation was made using NIRISS’s Single-Object Slitless Spectroscopy (SOSS) mode, which involves capturing the spectrum of a single bright object, like the star WASP-96, in a field of view. To capture these data, Webb stared at the WASP-96 star system for 6 hours 23 minutes, beginning about 2½ hours before the transit and ending about 1½ hours after the transit was complete. The transit itself lasted for just under 2½ hours. The curve includes a total of 280 individual brightness measurements – one every 1.4 minutes. Because the observation was made using a spectrograph, which spreads the light out into hundreds of individual wavelengths, each of the 280 points on the graph represents the combined brightness of thousands of wavelengths of infrared light. The actual dimming caused by the planet is extremely small: The difference between the brightest and dimmest points is less than 1.5 percent. NIRISS is ideally suited for this observation because it has the ability to observe relatively bright targets over time, along with the sensitivity needed to measure such small differences in brightness: In this observation, the instrument was able to measure differences in brightness as small as 0.02 percent. Although the presence, size, mass, and orbit of the planet had already been determined based on previous transit observations, this transit light curve can be used to confirm and refine existing measurements, such as the planet’s diameter, the timing of the transit, and the planet’s orbital properties. WASP-96 b is a hot gas giant exoplanet that orbits a Sun-like star roughly 1,150 light years away, in the constellation Phoenix. The planet orbits extremely close to its star (less than 1/20th the distance between Earth and the Sun) and completes one orbit in less than 3½ Earth-days. The planet’s discovery, from ground-based observations, was announced in 2014. The background illustration of WASP-96 b and its Sun-like star is based on current understanding of the planet from both NIRISS spectroscopy and previous ground- and space-based observations. Webb has not captured a direct image of the planet or its atmosphere. NIRISS was contributed by the Canadian Space Agency. The instrument was designed and built by Honeywell in collaboration with the Université de Montréal and the National Research Council Canada.

Newswise — NASA’s James Webb Space Telescope has captured the distinct signature of water, along with evidence for clouds and haze, in the atmosphere surrounding a hot, puffy gas giant planet orbiting a distant Sun-like star.

The observation, which reveals the presence of specific gas molecules based on tiny decreases in the brightness of precise colors of light, is the most detailed of its kind to date, demonstrating Webb’s unprecedented ability to analyze atmospheres hundreds of light-years away.

While the Hubble Space Telescope has analyzed numerous exoplanet atmospheres over the past two decades, capturing the first clear detection of water in 2013, Webb’s immediate and more detailed observation marks a giant leap forward in the quest to characterize potentially habitable planets beyond Earth.

WASP-96 b is one of more than 5,000 confirmed exoplanets in the Milky Way. Located roughly 1,150 light-years away in the southern-sky constellation Phoenix, it represents a type of gas giant that has no direct analog in our solar system. With a mass less than half that of Jupiter and a diameter 1.2 times greater, WASP-96 b is much puffier than any planet orbiting our Sun. And with a temperature greater than 1000°F, it is significantly hotter. WASP-96 b orbits extremely close to its Sun-like star, just one-ninth of the distance between Mercury and the Sun, completing one circuit every 3½ Earth-days.

The combination of large size, short orbital period, puffy atmosphere, and lack of contaminating light from objects nearby in the sky makes WASP-96 b an ideal target for atmospheric observations.

On June 21, Webb’s Near-Infrared Imager and Slitless Spectrograph (NIRISS) measured light from the WASP-96 system for 6.4 hours as the planet moved across the star. The result is a light curve showing the overall dimming of starlight during the transit, and a transmission spectrum revealing the brightness change of individual wavelengths of infrared light between 0.6 and 2.8 microns.

While the light curve confirms properties of the planet that had already been determined from other observations – the existence, size, and orbit of the planet – the transmission spectrum reveals previously hidden details of the atmosphere: the unambiguous signature of water, indications of haze, and evidence of clouds that were thought not to exist based on prior observations.

A transmission spectrum is made by comparing starlight filtered through a planet’s atmosphere as it moves across the star to the unfiltered starlight detected when the planet is beside the star. Researchers are able to detect and measure the abundances of key gases in a planet’s atmosphere based on the absorption pattern – the locations and heights of peaks on the graph. In the same way that people have distinctive fingerprints and DNA sequences, atoms and molecules have characteristic patterns of wavelengths that they absorb.

The spectrum of WASP-96 b captured by NIRISS is not only the most detailed near-infrared transmission spectrum of an exoplanet atmosphere captured to date, but it also covers a remarkably wide range of wavelengths, including visible red light and a portion of the spectrum that has not previously been accessible from other telescopes (wavelengths longer than 1.6 microns). This part of the spectrum is particularly sensitive to water as well as other key molecules like oxygen, methane, and carbon dioxide, which are not immediately obvious in the WASP-96 b spectrum but which should be detectable in other exoplanets planned for observation by Webb.

Researchers will be able to use the spectrum to measure the amount of water vapor in the atmosphere, constrain the abundance of various elements like carbon and oxygen, and estimate the temperature of the atmosphere with depth. They can then use this information to make inferences about the overall make-up of the planet, as well as how, when, and where it formed. The blue line on the graph is a best-fit model that takes into account the data, the known properties of WASP-96 b and its star (e.g., size, mass, temperature), and assumed characteristics of the atmosphere.

The exceptional detail and clarity of these measurements is possible because of Webb’s state-of-the-art design. Its 270-square-foot gold-coated mirror collects infrared light efficiently. Its precision spectrographs spread light out into rainbows of thousands of infrared colors. And its sensitive infrared detectors measure extremely subtle differences in brightness. NIRISS is able to detect color differences of only about one thousandth of a micron (the difference between green and yellow is about 50 microns), and differences in the brightness between those colors of a few hundred parts per million.

In addition, Webb’s extreme stability and its orbital location around Lagrange Point 2, roughly a million miles away from the contaminating effects of Earth’s atmosphere, makes for an uninterrupted view and clean data that can be analyzed relatively quickly.

The extraordinarily detailed spectrum – made by simultaneously analyzing 280 individual spectra captured over the observation – provides just a hint of what Webb has in store for exoplanet research. Over the coming year, researchers will use spectroscopy to analyze the surfaces and atmospheres of several dozen exoplanets, from small rocky planets to gas- and ice-rich giants. Nearly one-quarter of Webb’s Cycle 1 observation time is allocated to studying exoplanets and the materials that form them.

This NIRISS observation demonstrates that Webb has the power to characterize the atmospheres of exoplanets—including those of potentially habitable planets—in exquisite detail.

For a full array of Webb’s first images and spectra, including downloadable files, please visit: https://webbtelescope.org/news/first-images.