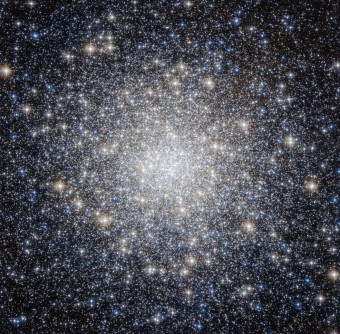 This image from NASA’s Hubble Space Telescope shows the heart of the globular star cluster Messier 92 (M92), one of the oldest and brightest in the Milky Way. The cluster packs roughly 330,000 stars tightly together, and they orbit the center of the galaxy en masse. NASA’s James Webb Space Telescope will observe M92, or a similar globular cluster, early in its mission to demonstrate its ability to distinguish the light of its individual stars in a densely packed environment. Webb’s high resolution and sensitivity will provide scientists a wealth of detailed star data relevant to many areas of astronomy, including the stellar lifecycle and the evolution of the universe.

Newswise — The combination of high resolution and infrared-detecting instruments on NASA's upcoming James Webb Space Telescope will reveal stars that are currently hidden even from the powerful Hubble Space Telescope. The wealth of additional star data will allow astronomers to investigate a range of questions, from star birth to star death, to the universe's elusive expansion rate. Early observations with Webb will demonstrate its ability to distinguish the individual light of stars in the local universe in a range of environments and provide astronomers with tools for making the most of Webb's powerful capabilities.

"NASA's Hubble and Spitzer space telescopes have been transformative, opening the door to the infrared universe, beyond the realm of red visible light. Webb is a natural evolution of those missions, combining Spitzer's view of the infrared universe with Hubble's sensitivity and resolution," says Daniel Weisz of the University of California, Berkeley, the principal investigator on Webb's early release science (ERS) program on resolved populations of stars.

Webb's ability to resolve individual stars that are shrouded behind gas and dust in visible light will be applicable to many areas of astronomical research. The goals of this ERS program are to demonstrate Webb's capabilities in the local universe and create free, open-source data analysis programs for astronomers to make the best use of the observatory as quickly as possible. Data from the ERS programs will be available to other astronomers immediately, and archived for future research via the Barbara A. Mikulski Archive for Space Telescopes (MAST).

Webb's ability to pick out details for more individual stars than we have seen before will improve distance measurements to nearby galaxies, which Weisz says will be crucial to one of the biggest mysteries of modern-day astronomy: How fast is the universe expanding? A phenomenon called dark energy seems to be driving this expansion. Various methods for calculating the expansion rate have resulted in different answers—discrepancies astronomers hope Webb's data can help reconcile.

"In order to do any of this science, calculating distances and then the universe's expansion rate, we need to be able to extract the light of individual stars from Webb images," Weisz says. "Our ERS program team will develop software that empowers the community to make those types of measurements."

Seeing more stars will mean more insight into their lifecycle. Webb will provide new views of the full range of stages in a star's life, from formation to death.

"Right now we are effectively limited to studying star formation in our own Milky Way galaxy, but with Webb's infrared capabilities we can see through the dusty cocoons that shelter forming protostars in other galaxies—like Andromeda, which is more metal-rich—and see how stars form in a very different environment," Weisz says.

Astronomer Martha Boyer, also on this observing-program team, is interested in the insights Webb will provide toward the end of the stellar lifecycle, when stars become bloated, red, and dusty.

"NASA's Spitzer Space Telescope showed us that dusty, evolved stars exist even in very primitive galaxies where they weren't expected, and now with Webb we will be able to characterize them and learn how our models of the star lifecycle line up with real observations," says Boyer, an instrument scientist on Webb's Near Infrared Camera (NIRCam) team at the Space Telescope Science Institute in Baltimore, Maryland.

The Early Universe via the Local Neighborhood

Resolving and studying individual stars is necessary for understanding the bigger picture of how galaxies formed and function. Astronomers then can ask even bigger questions of how galaxies have evolved over time and space, from the distant, early universe to the Local Group—a collection of more than 20 nearby galaxies to which our galaxy belongs. Weisz explains that even though this observing program will be looking locally, there is evidence of the early universe to be discovered.

"We will have Webb study a nearby, ultra-faint dwarf galaxy, a remnant of the first seed-galaxies to form in the universe, some of which eventually merged to form larger galaxies like the Milky Way," Weisz says. "At great distances these types of galaxies are too faint for even Webb to see directly, but small, local dwarf galaxies will show us what they were like billions of years ago."

"We really need to understand the local universe in order to understand all of the universe," Boyer says. "The Local Group of galaxies is a sort of laboratory, where we can study galaxies in detail—every single component. In distant galaxies we can't resolve much detail, so we don’t know exactly what's going on. A major step towards understanding distant or early galaxies is to study this collection of galaxies that is within our reach."

As the Webb mission progresses, Boyer and Weisz expect that astronomers will use the tools their team develops in unexpected ways. They emphasize that developing the program was an effort of the entire local-universe astronomy community, and they plan to continue that collaboration once the data come in. Their observing-program team plans to host a workshop to go over the results of the program with other astronomers and tweak the software they’ve developed, all with the goal of assisting members of the astronomy community in applying for time to use Webb for their research.

"I think that is really important—the idea of working together to achieve big science, as opposed to a lot of us trying to compete," Weisz says.

The James Webb Space Telescope will be the world's premier space science observatory when it launches in 2021. Webb will solve mysteries in our solar system, look beyond to distant worlds around other stars, and probe the mysterious structures and origins of our universe and our place in it. Webb is an international program led by NASA with its partners, ESA (European Space Agency) and the Canadian Space Agency.