Newswise — The Apollo Moon missions of 1969-1972 all share a dirty secret. "The major issue the Apollo astronauts pointed out was dust, dust, dust," says Professor Larry Taylor, Director of the Planetary Geosciences Institute at the University of Tennessee. Fine as flour and rough as sandpaper, Moon dust caused 'lunar hay fever,' problems with space suits, and dust storms in the crew cabin upon returning to space.

The trouble with moon dust stems from the strange properties of lunar soil. The powdery grey dirt is formed by micrometeorite impacts which pulverize local rocks into fine particles. The energy from these collisions melts the dirt into vapor that cools and condenses on soil particles, coating them in a glassy shell.

These particles can wreak havoc on space suits and other equipment. During the Apollo 17 mission, for example, crewmembers Harrison "Jack" Schmitt and Gene Cernan had trouble moving their arms during moonwalks because dust had gummed up the joints. "The dust was so abrasive that it actually wore through three layers of Kevlar-like material on Jack's boot," Taylor says.

To make matters worse, lunar dust suffers from a terrible case of static cling. UV rays drive electrons out of lunar dust by day, while the solar wind bombards it with electrons by night. Cleaning the resulting charged particles with wet-wipes only makes them cling harder to camera lenses and helmet visors. Mian Abbas of the National Space Science and Technology Center in Huntsville, Alabama, will discuss electrostatic charging on the moon and how dust circulates in lunar skies.

Luckily, lunar dust is also susceptible to magnets. Tiny specks of metallic iron (Fe0) are embedded in each dust particle's glassy shell. Taylor has designed a magnetic filter to pull dust from the air, as well as a "dust sucker" that uses magnets in place of a vacuum. He has also discovered that microwaves melt lunar soil in less time than it takes to boil a cup of tea. He envisions a vehicle that could microwave lunar surfaces into roads and landing pads as it drives, and a device to melt soil over lunar modules to provide insulation against space radiation. The heating process can also produce oxygen for breathing.

But the same specks of iron that could make moon dust manageable also pose a potential threat to human health, according to Bonnie Cooper at NASA's Johnson Space Center. "Those tiny blebs of pure iron we see on the surface of lunar grains are likely to be released from the outside edges of the particle in the lungs and enter the bloodstream," she says. Preliminary studies suggest that the inhalation of lunar dust may pose a health hazard, possibly including iron toxicity. Members of NASA's Lunar Airborne Dust Toxicity Advisory Group, Cooper, Taylor, and colleagues are studying how moon dust affects the respiratory system. They plan to set a lunar dust exposure standard by 2010, in time for NASA engineers to design a safer and cleaner trip to the Moon.

Abstract 345-9 (Cooper): "Physical and Biological Hazards of Lunar Dust and Their Impact on Habitat and Space Suit Design" (10:00 AM)http://a-c-s.confex.com/crops/2008am/webprogram/Paper48387.html

For more information on the 2008 Joint Meeting visit http://www.acsmeetings.org. 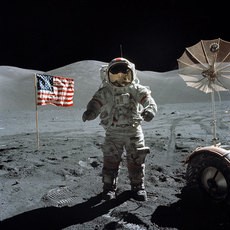 Caption: The surface of the Moon is covered in powdery gray dust that caused unforeseen problems for NASA astronauts. Apollo 17 astronaut Harrison "Jack" Schmitt took this picture of Eugene Cernan during their third and last walk on the lunar surface in December of 1972. 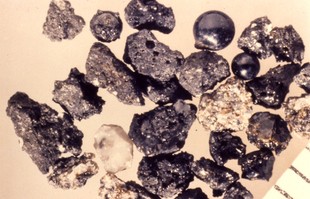 Caption: Lunar dust as seen under a microscope. Each is covered in a glassy coating that may be smooth and round or jagged and sharp. Particle types shown include plagioclase (lower left, white), volcanic glass beads (upper right, smooth and black), impact-glass beads (upper left, black but rough), rock chips (rough and gray) and agglutinate (center, rough and gray, with hole). For scale, the smallest round bead at upper right is approximately 1 mm in diameter. 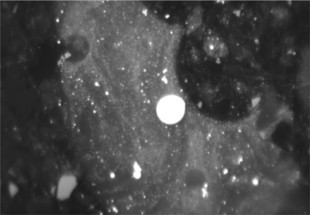 Caption: Flecks of metallic iron (white) embedded in the glassy coating of lunar dust. All lunar impact glass contains grains of iron a tenth of a micron across or less. 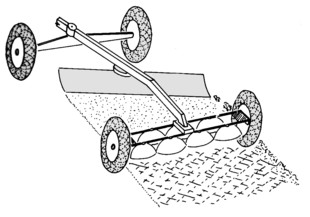 Caption: Lunar dust melts readily when exposed to microwave energy. Professor Larry Taylor of the University of Tennessee envisions a lunar paver fitted with microwave generators that could sinter, or melt, lunar soils into landing strips or roads.