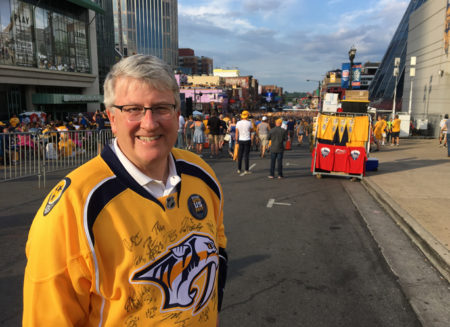 Newswise — When the Nashville Predators hockey team hits the ice Saturday, Nov. 2, the players will take on an important opponent: childhood cancer.

The Hockey Fights Cancer game against the New York Rangers will raise funds for the 365 Pediatric Cancer Fund at Monroe Carell Jr. Children’s Hospital at Vanderbilt. The team and the players will also honor one of the hospital’s most passionate advocates, Luke Gregory, chief executive officer for Children’s Hospital, who died Oct. 18 after a battle with non-Hodgkin’s lymphoma.

“What we have created with our partnership with Monroe Carell Jr. Children’s Hospital at Vanderbilt on so many fronts, but especially through the 365 Fund and our Hockey Fights Cancer nights, would not have been possible without the vision, passion and creativity of Luke,” said Sean Henry, the Predators president and CEO. “He positioned us and all of the supporting programs for success and always had a long-term vision to make each tangential initiative drive toward our ultimate goal — in raising the funds necessary to continue to move research forward while making each child’s day better through our interactions. He was truly a special man and all of us that were fortunate enough to have known him will miss him.”

During the game, the Predators’ players will wear helmets inscribed with the initials “LG,” honoring Gregory, and his family is invited to attend the game for the remembrance. Gregory, who continuously focused on serving the heath care needs of children and families from throughout Tennessee and surrounding states, served as CEO of Children’s Hospital since 2011.

“Our family is overwhelmed to see Luke’s memory honored in this way,” said Susan Gregory, his wife of nearly 40 years. “Luke was a humble man who always wanted attention to go to others. He would be floored by this incredible gesture from the Nashville Predators, and I know exactly how Luke would respond. He would want all of us to roll up our sleeves and, on his behalf, relentlessly support and care for any person facing a cancer diagnosis.”

The Nashville Predators also hope fans will make an assist in the fight against childhood cancer. Volunteers will be on hand with donation buckets at the entrances to Bridgestone Arena and around the concourse. Also, at concession stands, fans can add a $1 button to their purchase as an additional donation.

Hockey Fights Cancer games, dedicated to young patients battling cancer, are held twice a year, with the next one scheduled for Feb. 22. Pediatric patients from Children’s Hospital are also invited to the games, with a patient ambassador participating in a ceremonial puck drop, riding the Zamboni and more. All money raised during the games will benefit the fund.

“We always look forward to the Hockey Fights Cancer games that highlight our partnership with the Predators, and more importantly, celebrate our pediatric cancer patients. Luke loved these games,” said Meg Rush, MD, interim president of Monroe Carell Jr. Children’s Hospital at Vanderbilt. “He so admired the courage all our patients show, but especially our cancer patients. As he walked his journey with cancer over the past several years, he drew strength from our pediatric cancer patients and committed even more to our cancer programming. I’m grateful to the Predators for honoring Luke Saturday as they continue to raise funds to carry on our vision to fight pediatric cancer.”

In addition to their gifts, the Predators have supported Children’s Hospital in many ways, including players’ frequent visits with patients at the hospital; Flashes of Hope and Beads of Courage programs for patients; and new for the 2020 season, each home game features the Vanderbilt Health Champ of the Game where fans are introduced to a patient from Children’s Hospital via the jumbotron.

Over the past eight years combined, the team has given more than $2 million in donations and in-kind contributions to the hospital and its programs. For more information on Hockey Fights Cancer games, visit the Predators’ website athttps://www.nhl.com/predators/community/foundation/365-fund.