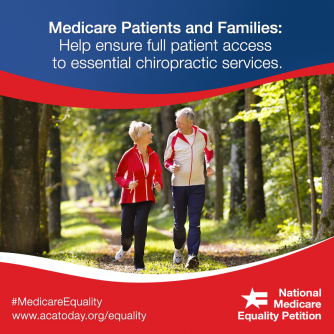 Newswise — Arlington, Va. - The American Chiropractic Association (ACA) has launched a national grassroots effort to eliminate a blatantly anti-competitive provision of Medicare law that arbitrarily limits reimbursement for medically necessary services delivered by doctors of chiropractic (DCs). The statutory change ACA seeks would define DCs as "physicians" under Section 1861 of the Social Security Act for the provisioning of any existing Medicare covered service that falls within the scope of practice of an individual DC as defined by their applicable state law. The centerpiece of ACA's campaign will focus on generating a robust level of patient grassroots support aimed at Congress that seeks to ensure that Medicare beneficiaries have full access to a broader range of covered services provided by chiropractic physicians than current law permits. The level of support needed will be largely generated via the distribution of a National Medicare Equality Petition that will raise awareness of how the current Medicare system shortchanges seniors who want and need the essential services provided by DCs to stay healthy, pain free and mobile.

According to Dr. Hamm, the federal government continues to rely on an antiquated statute that discriminates against Medicare's chiropractic patients by not covering medically necessary and mandated services delivered by DCs. The federal Medicare program, which in many cases serves as a model for private insurance plans, currently serves more than 55 million Medicare beneficiaries. Various projections forecast the number of people age 65 or older increasing by about one-third over the next decade. Chiropractic inclusion in the Medicare program was established in 1972 and has seen little change since then, other than elimination of the X-ray requirement in 1997.

ACA strongly encourages DCs across the country to recruit the active support of patients and other chiropractic supporters to sign the petition and add their name to a growing list of Americans who demand coverage for all services provided by chiropractic physicians for the Medicare population. The plan is to let signers of the petition have their voice heard in Washington through a series of targeted grassroots campaigns whereby they contact their members of Congress and seek a solution to the problem.

The National Medicare Equality Petition is part of ACA's comprehensive strategy to ensure that chiropractic physicians are not discriminated against in providing necessary care permitted under their state scope of practice. ACA's House of Delegates passed a resolution in February 2015 making Medicare parity a top legislative and regulatory priority.

The American Chiropractic Association (ACA), based in Arlington, Va., is the largest professional association in the United States representing doctors of chiropractic. ACA promotes the highest standards of ethics and patient care, contributing to the health and well-being of millions of chiropractic patients. Visit us at www.acatoday.org.