PA profession is expanding rapidly with new programs and graduates 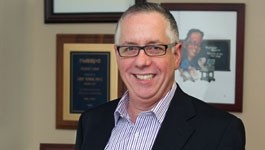 The profession is expanding rapidly and considered one of the hottest careers for graduate employment.

“The outlook for the profession is positive -- there are more than 70 new programs in the pipeline and in the next few years, we will graduate more than 10,000 PAs a year nationwide,” said Herman. “Demand for graduate PAs is increasing. The need is there.”

“The Affordable Care Act is reducing disparities across the country in states that have adopted its provisions, and hospitals and practices continue to hire advanced clinicians, like PAs, left and right,” said Herman. “PAs are trained as generalists and they have the ability to be nimble and move into those positions.”

Herman has taught at NYIT since 1999. He is credentialed in the use of conscious sedation in adults and children, and is certified as an advanced cardiac life support instructor and provider; basic cardiac life support provider; and New York State OSHA infection control instructor and provider. He is the former chief PA at St. Vincent/Catholic Medical Center's Department of Emergency Medicine in New York City. He is also the immediate past president of the AAPA.