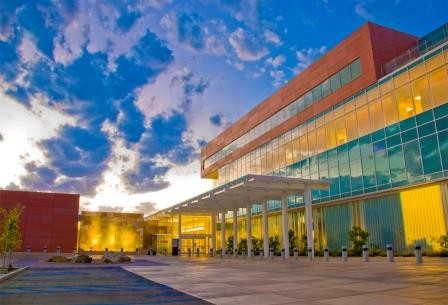 As the only NCI Cancer Center within a 500 mile radius, the special characteristics of the UNMCC include: the multiethnic and multicultural populations that it serves - primarily Hispanic/Latino, American Indian, and non-Hispanic White - with their strikingly different patterns of cancer incidence, mortality, and cancer health disparities; the integration of regional scientific strengths in engineering, biotechnology, nanotechnology, drug discovery, and high performance computing into its Research Programs and Shared Resources; and, the extensive statewide outreach networks it has built for the delivery of cancer care, for community-based education and research, and for the participation of community oncologists and healthcare systems in UNMCC and NCI-sponsored clinical trials.

From 2005, when the UNMCC first achieved NCI Designation to its first competitive renewal in 2010, the Center’s research funding base has continued to grow. Reporting cumulative totals for calendar year 2012, the UNMCC held $74.9 million in total peer-reviewed funding, of which $23.4 million was from NCI. Reporting “active, point in time” funding as of 6/1/13, the Center currently holds $58.5 million in total peer-reviewed cancer-relevant funding.

UNMCC members were recently awarded two of the first 57 awards funded under the NCI Provocative Questions Program (1R01CA170250-01; 1R21CA170375). Center members also participate in the nation’s only Interdisciplinary HPV Prevention Center (U19AI084081) based in the UNM School of Medicine; a collaborative center with the Fred Hutchinson Cancer Center focused on Understanding and Preventing Breast Cancer Heath Disparities in Latinas (P50CA148143); and a NCI SPORE in Lung Cancer (P50CA058184).

As the UNMCC’s primary site for clinical and translational research, the UNM Cancer Treatment and Clinical Research Facility serves as the hub of the Center’s Statewide Cancer Care Network, a series of partnerships with community health systems in Santa Fe (with Christus-St. Vincent’s Regional Medical Center which serves northern New Mexico); in Farmington (with San Juan Regional Medical Center which serves the northwestern corner of the State, southwestern Colorado, and the Navajo Nation); and in Las Cruces (with Memorial Medical Center which serves southern New Mexico, the Mexican border region, and west Texas). Linked by telemedicine and virtual web, each outreach site provides a critical foothold to not only deliver improved cancer care, but also community-based cancer education and participatory research and access for patients and community oncologists to the UNMCC’s cancer clinical trials program. Funded in part by the Center’s Minority-Based Community Clinical Oncology Program Grant (U01CA086780), these outreach sites participate in the UMNCC statewide cancer clinical trials network, The New Mexico Cancer Care Alliance.

In 2012, the UNM Cancer Center provided cancer diagnosis and treatment to greater than 14,000 patients in over 125,000 ambulatory clinic visits, representing greater than 60% of the newly diagnosed adult and >99% of the pediatric cancer patients in New Mexico. At its primary center on the UNM campus in Albuquerque, the UNMCC saw over 3,200 newly diagnosed cancer patients in 2012, 48% of whom were ethnic minorities (predominantly Hispanic (35%) or American Indian (11%)). Of these patients, 2,345 were eligible for participation in UNMCC clinical trials . Accrual to all types of interventional and non-interventional trials in 2012 was 905. Thus, the UNMCC maintained a solid rate of accrual to clinical trials with significant participation of ethnic/racial minorities, while maintaining its mission to the underserved.