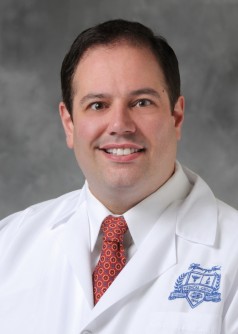 Steven N. Kalkanis, M.D., Chair of the Department of Neurosurgery and Co-Director of the Neuroscience Institute at Henry Ford Hospital.

Newswise — DETROIT - Following a national search, nationally renowned neurosurgeon Steven N. Kalkanis, M.D., has been appointed Chair of the Department of Neurosurgery and Co-Director of the Neuroscience Institute at Henry Ford Hospital.

He began his position May 1. At age 42, Dr. Kalkanis is one of the youngest neurosurgery chairs in the country.

Since arriving at Henry Ford in 2004, Dr. Kalkanis has held several leadership roles, including Vice Chair for Operations in the Department of Neurosurgery; Co-Director of the Hermelin Brain Tumor Center and Co-Director of the intra-operative MRI surgical program. He also serves as Medical Director of the Referring Physician Office and serves as a leader of the System's outstate growth strategy.

He will remain the Medical Director of the Center for Cancer Surgery at Henry Ford Hospital.

In addition to his clinical practice, Dr. Kalkanis directs a translational research laboratory investigating novel, targeted, personalized medicine approaches for the treatment of brain tumors. A nationally recognized expert in brain tumor surgery, Dr. Kalkanis authored the definitive set of national guidelines for the multidisciplinary treatment of brain metastases in 2010.

He was also appointed in 2010 to the executive board of the Congress of Neurological Surgeons, the world’s largest neurosurgical organization, where he chairs the national neurosurgical Guidelines Committee and where he will serve as the Scientific Program Chair in 2015. A member of the editorial boards of Neurosurgery, Journal of Neuro-Oncology, AANS Neurosurgeon and CNS Quarterly, Dr. Kalkanis also serves on the executive committee of the Joint Section on Tumors. In addition, he is president of the Michigan Association of Neurological Surgeons.

Dr. Kalkanis received his undergraduate degree from Harvard University in 1993, graduating with highest honors with the distinction of a John Harvard Scholar. He then earned his medical degree from Harvard Medical School in 1997, receiving the Linnane Prize for highest overall achievement and serving as Class Marshal. He was recruited to Henry Ford after completing his residency training at Massachusetts General Hospital.

The Henry Ford Department of Neurosurgery is a nationally recognized academic center for research and clinical excellence (U.S. News and World Report, 14 of 15 years) with 32 physicians and scientists (including 14 neurosurgeons) covering multiple hospitals.

Henry Ford Neurosurgery routinely attracts top residency applicants in the Match each year, and is supported by renowned teaching faculty in every neurosurgical subspecialty. The Hermelin Brain Tumor Center has received National Cancer Institute funding for 21 years, and the Henry Ford Neuroscience Institute has received SG2 and NeuroSource recognition for 18 years.