Gift from Mindy and Jon Gray will further the development of cutting-edge lab science, clinical trials and educational outreach for patients with and at-risk for breast, ovarian, pancreatic, and other cancers

3-May-2017 11:05 AM EDT, by Perelman School of Medicine at the University of Pennsylvania contact patient services
favorite_border 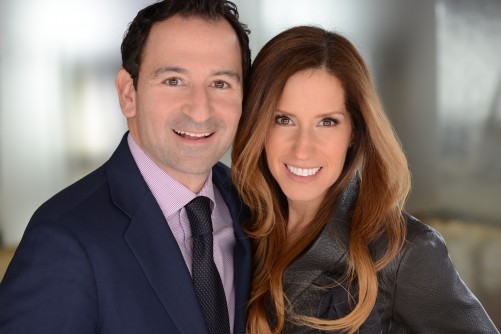 Newswise — New $21 Million Gift Puts Basser Center for BRCA at the Forefront of Advancements for Patients At Risk of Inherited Cancers Gift from Mindy and Jon Gray will further the development of cutting-edge lab science, clinical trials and educational outreach for patients with and at-risk for breast, ovarian, pancreatic, and other cancers

PHILADELPHIA – A new $21 million gift to the Basser Center for BRCA at the Abramson Cancer Center of the University of Pennsylvania from alumni Mindy and Jon Gray will cement and propel Penn’s preeminence as a leader in research to improve treatment and prevention strategies for hereditary cancers. The gift brings the Grays' total commitment to $55 million, following their initial $25 million gift that established the Basser Center in 2012, and subsequent gifts to support the Center, which advances BRCA gene mutation-related science around the world.

“Mindy and Jon have directed their visionary philanthropy to a most critical area in medicine,” said University of Pennsylvania President Amy Gutmann. “They have enabled Penn to create a unique model of cancer care that thrives on collaboration and personal engagement. Their support is already saving the lives of patients with – and at risk for – BRCA mutations.  The possibility of eliminating genetic diseases increases exponentially because of their generosity and personal commitment. They are an exceptional example of Penn alumni who are making a positive difference in the world.”

Since its establishment as the world’s first center devoted to the study of BRCA-related cancers, the Basser Center has propelled improvements in prevention, screening, and treatment for men and women with BRCA gene mutations.

“The advancements we’ve made in understanding, treating and preventing BRCA-related cancers in the past five years are astounding and would not have been possible without the generosity of Mindy and Jon Gray,” said Susan M. Domchek, MD, executive director of the Basser Center for BRCA. “Their support has fostered unparalleled collaborations that extend far beyond Penn, empowering the brightest minds around the world to take new, multi-disciplinary approaches toward achieving our shared goals of preventing and curing BRCA-related cancers."

Key accomplishments during the Basser Center’s first five years include:

Since 2012, the Basser Center has awarded transformative grants to 26 investigators and researchers at Penn and 12 at institutions around the world, including projects working to prevent the molecular changes in cells that lead to cancer, extend educational resources to at-risk populations, and understand racial disparities in BRCA mutations and associated cancers.

“With their generous gifts and exceptional innovation, Mindy and Jon have created a pioneering approach to accelerating medical research and care,” said J. Larry Jameson, MD, PhD, dean of the Perelman School of Medicine at the University of Pennsylvania and executive vice president of the University of Pennsylvania for the Health System. “In today’s climate, where the competition for limited federal funding is on the rise, philanthropy is a critical part of advancing our knowledge in the fight against cancer."

“We have been awed by the advancements made possible through the research and collaborations at the Basser Center over the last five years, and are more hopeful than ever that our support will lead to the cures for, and ultimately, the prevention of, BRCA-related cancers,” said Mindy and Jon Gray.

Through the Grays' continued support, the Basser Center’s vision will:

Mindy and Jon Gray graduated from Penn in 1992. The couple has supported the University throughout their 25 years since graduation. The Basser Center was established in honor of Mindy’s sister, Faith Basser, who passed away at the age of 44 of BRCA-related ovarian cancer. The Grays are also the founders of the Gray Foundation, a private foundation committed to maximizing access to education, healthcare and opportunity for low-income children in New York. The Gray Foundation is focused on funding initiatives to advance the care of individuals living with BRCA1 and BRCA2 mutations.

Abramson Cancer Center of the University of Pennsylvania

The Abramson Cancer Center (ACC) of the University of Pennsylvania is a world leader in cancer research, patient care, and education. Its preeminent position is reflected in its continuous designation as a Comprehensive Cancer Center by the National Cancer Institute (NCI) since 1973, one of 45 such Centers in the United States, and its longstanding “exceptional” rating by the NCI. The ACC’s clinical program is comprised of a dedicated, multi-disciplinary team of physicians, nurse practitioners, nurses, social workers, physical therapists, nutritionists, and patient care coordinators. Each year, the Center has more than 90,000 outpatient visits, over 11,800 inpatient discharges, and provides 37,000 chemotherapy treatments and more than 66,000 radiation treatments to its patients. In addition, the ACC is home to more than 400 basic, translational, and clinical scientists who work in tandem to advance new treatments and cures for cancers of all kinds.