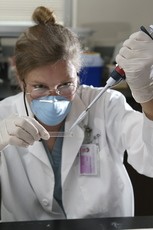 Dr. Anne Kellogg of East Carolina University applies antibodies to a slice of human tumor in order to study the reaction between the antibodies and the tumor. Her research offers hope for treating cancer.

Newswise — A discovery by an East Carolina University pathologist might be a breakthrough in an evolving class of drugs used to fight cancer.

Dr. Anne Kellogg has developed a monoclonal antibody that could play a vital role in treating the most common form of ovarian cancer, breast cancer and other cancers. She is working with two major drug firms, ImmunoGen Inc. and sanofi-aventis, that have expertise in formulating antibodies into cancer therapies and taking them to clinical trials in humans.

The antibody with the cell-killing agent linked to it circulates in the body in an inactive state. The cell-killing agent becomes active only when it reaches the tumor cell, so ImmunoGen refers to its technology as Tumor-Activated Prodrug, or TAP, technology. Sanofi-aventis has rights to develop specific anticancer agents using ImmunoGen's TAP technology and is in charge of advancing the TAP compound containing the DS-6 antibody licensed from ECU into human clinical testing.

Monoclonal antibodies are manufactured proteins, produced from a single parent cell, that bind to a specific substance. They can be used to detect or purify that substance and are widely used in hospital and pathology laboratories as components of diagnostic tests. Monoclonal antibodies gained attention as a possible way to treat cancer in the 1980s. In the 1990s, scientists refined techniques to expand their usefulness as therapeutics by making subtle changes to the antibodies so the human body would not reject them as foreign tissue. One of the best-known monoclonal antibodies is trastuzumab, sold under the brand name Herceptin and used to treat breast cancer.

Kellogg began working with monoclonal antibodies in the early 1990s looking for ones pathologists could use to diagnose cancer. A few years later, working with Dr. Diane Semer, a gynecologic oncologist formerly with ECU, Kellogg turned her attention to identifying an antibody that could not only recognize tumors but also be useful in treating them. She isolated DS-6 in the late 1990s and then began characterizing the antibody for its ability to recognize various types of cancer with the help of Dr. Nancy Smith, a former ECU pathologist.

"Drugs that are developed from monoclonal antibodies are potentially more specific for tumors and risk less in the way of toxicity to the patient," said Dr. Adam Asch, associate director of the Leo W. Jenkins Cancer Center at ECU.

Kellogg added that the treatment could have benefits even if it falls short of curing cancer.

"You may be able to convert cancer to a very chronic disease you can treat if we can provide oncologists with a wider array of treatment options," she said.

"This has been an amazing education for me and personally very rewarding to get a ringside seat in seeing the complex process of drug discovery and development take place. It has also demonstrated how well academia, biotechnology and pharmaceutical companies can work together in this process," Kellogg said.

Kellogg's research has been funded in part by ECU and the Department of Pathology and Laboratory Medicine. "We feel we made a wise investment that will help advance the treatment of cancer by providing funds for Dr. Kellogg's research," said Dr Peter Kragel, chair of the department. Future grants from ImmunoGen and sanofi-aventis are under discussion.