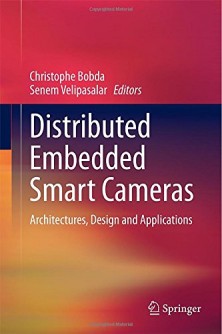 A smart camera, with an internally based processing engine, developed by researchers at the University of Arkansas.

Newswise — FAYETTEVILLE, Ark. – Christophe Bobda, an associate professor of computer science and computer engineering in the College of Engineering at the University of Arkansas is co-editor of Distributed Embedded Smart Cameras. The newly released textbook covers the architecture, design and applications of a new wave of cameras, known as smart cameras, which analyze video data internally and thus limit the amount of data that needs to be sent to remote servers.

“Cameras are pervasively used for surveillance and monitoring of important processes and assets, such as traffic conditions, commercial vehicles, schools and parks,” Bobda said. “Current systems cannot provide the bandwidth required to transport increasingly higher amounts of data. And analyzing terabytes of data in real-time requires computer architectures with capability far beyond the currently available systems.”

Smart cameras address these shortcomings, Bobda said, because they can analyze video data within the camera, close to the sensor, which in turn significantly decreases the amount of data that need to be transported.

Bobda edited the textbook with Senem Velipasalar, electrical engineering and computer science professor at Syracuse University. They chose articles that emphasize embedded architecture and mobility, rather than algorithms, software and stationary systems, which have been covered in previous texts. Bobda said their book is meant to complement earlier works that have focused on fundamental aspects of smart cameras.

Bobda and Velipasalar organized the book into three primary sections. The first section deals with architecture and design flow. This section includes an overview of platforms and architectures and focuses on processors, communication infrastructure and memory. Bobda contributes a chapter on the use of reconfigurable devices embedded in smart cameras.

The second section of the book deals with issues and challenges related to the operation of smart cameras in a mobile environment. Chapters in this section are devoted to distributed computer vision, wearable cameras for detecting falls and embedded smart cameras mounted on vehicles. The latter detect and track taillights of vehicles in front of the cameras, recognize common alert signals and count cars passing on both sides of the mounted vehicle.

The final section of the book focuses on applications. Chapters within this section include information on exploring methods to combine images from multiple sources to enable tracking in a distributed network and using “soft”-biometric features to identify people. The last chapter discusses the use of smart cameras as part of a system to avoid distracted drivers.

Bobda, has served as guest editor of the Elsevier Journal of Microprocessor and Microsystems and member of the editorial board of the Hindawi International Journal of Reconfigurable Computing. He is the author of one of the most comprehensive books in the rapidly growing field of reconfigurable computing. 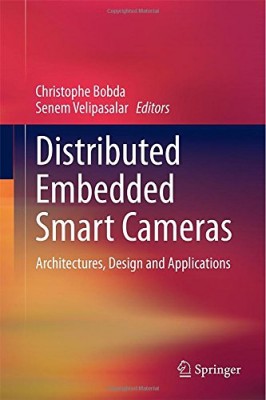 Caption: A smart camera, with an internally based processing engine, developed by researchers at the University of Arkansas.