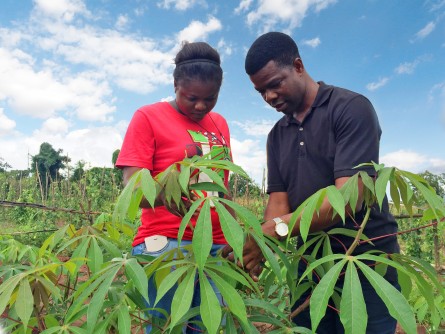 (l-r) Field technician Tessy Uwangue, and Chiedozie Egesi, project leader for the Next Generation Cassava Breeding project, check field plots of cassava at the International Institute of Tropical Agriculture in Nigeria for signs of disease.

Media note: Photos of technicians in field plots of cassava can be viewed and downloaded at: https://cornell.box.com/v/cassava

Newswise — ITHACA, N.Y. – Cassava is vital to the food security of millions of Africans who eat some form of the root crop daily. Although cassava breeders are making progress, they face significant challenges in developing disease-resistant varieties that also increase yield and respond to the needs of smallholder farmers and processors.

Cornell University will expand international efforts to deliver improved varieties of cassava to smallholder farmers in sub-Saharan Africa with $35 million in new funding from the Bill & Melinda Gates Foundation and UK aid in the United Kingdom.

“This grant funds a second five-year phase that will allow us to build on previous work and focus on getting improved varieties into farmers’ fields,” said Ronnie Coffman, international plant breeder and director of International Programs in the College of Agriculture and Life Sciences, who leads the project.

During Phase 1 of the Next Generation Cassava Breeding project – also funded by the Gates Foundation and UK aid from 2012 to 2017 – researchers shortened the breeding cycle for new cassava varieties by improving flowering and using genomic selection. Through analyzing plant genotypes and identifying cassava lines with desirable traits, such as resistance to cassava brown streak disease, or high dry matter content, breeders also improved their ability to make selections based on genetics and probability without having to wait for seedlings to reach adulthood. These methods save breeding time for a crop where flowering and sexual propagation are issues.

Another goal of Phase 1 was to make cassava genomic information publicly accessible on an open database. Cassava researchers all over the world are now comparing results and improving breeding programs without duplicating efforts by using Cassavabase. To reduce cost per progeny and improve the quality of data uploaded to Cassavabase in Phase 2, NextGen researchers will use additional methods of whole genome sequencing.

“Our focus for the next five years will be to translate this research into breeding practices to increase impact,” said Chiedozie Egesi, NextGen project director and adjunct professor of plant breeding and genetics at Cornell, who is based at the International Institute of Tropical Agriculture (IITA) in Nigeria. A key goal in Phase 2 will be to identify traits preferred by farmers and end-users and incorporate them into new cassava lines.

“Among the 30 new clones developed at IITA using our methods, 10 had higher dry matter yield than any clone currently available for smallholder farmers in Nigeria,” said Jean-Luc Jannink, a research plant geneticist with the U.S. Department of Agriculture, Agricultural Research Service (USDA-ARS) and Cornell adjunct associate professor in the Department of Plant Breeding and Genetics. “Dry matter yield is a close proxy to food yield. Among these new clones are ones with over 20 percent higher food yield than currently available clones. Conservatively, we believe that we will increase the rate of genetic gain in cassava by 30 to 50 percent.”

Compared with other major staples like maize, rice and wheat, cassava has undergone few advances in productivity and yield over the last 50 years, making it an ideal candidate for breeding improvement. Because cassava is clonally propagated and has a low multiplication rate, it can take almost six to eight years before a new cassava variety makes it from breeders’ nurseries through field trials to farmers’ fields. Most breeding efforts focus on product development – goals set by scientists and researchers without accounting for the preferences of farmers. In practice, this can result in poor adoption of new varieties and unrealized potential.

“Breeders must be able to more quickly develop cassava varieties that resist diseases, are climate resilient, and meet the needs of end-users and consumers,” said Egesi.