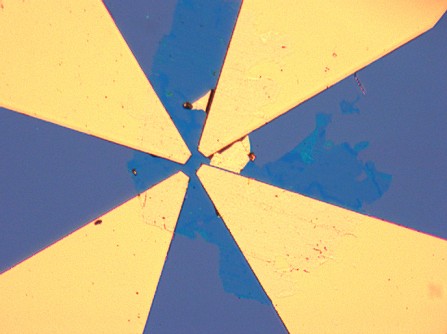 Researchers at Rensselaer Polytechnic Institute have developed a new method to harvest energy from flowing water. Led by Rensselaer Professor Nikhil Koratkar, the study sought to explain how the flow of water over surfaces coated with the nanomaterial graphene could generate small amounts of electricity. Using a small sheet of the graphene coating, seen above as a dark blue patch connected to gold contacts, the research team demonstrated the creation of 85 nanowatts of power.

Newswise — Troy, N.Y. – Researchers at Rensselaer Polytechnic Institute have developed a new method to harvest energy from flowing water. This discovery aims to hasten the creation of self-powered microsensors for more accurate and cost-efficient oil exploration.

Led by Rensselaer Professor Nikhil Koratkar, the researchers investigated how the flow of water over surfaces coated with the nanomaterial graphene could generate small amounts of electricity. The research team demonstrated the creation of 85 nanowatts of power from a sheet of graphene measuring .03 millimeters by .015 millimeters.

This amount of energy should be sufficient to power tiny sensors that are introduced into water or other fluids and pumped down into a potential oil well, Koratkar said. As the injected water moves through naturally occurring cracks and crevices deep in the earth, the devices detect the presence of hydrocarbons and can help uncover hidden pockets of oil and natural gas. As long as water is flowing over the graphene-coated devices, they should be able to provide a reliable source of power. This power is necessary for the sensors to relay collected data and information back to the surface.

“It’s impossible to power these microsensors with conventional batteries, as the sensors are just too small. So we created a graphene coating that allows us to capture energy from the movement of water over the sensors,” said Koratkar, professor in the Department of Mechanical, Aerospace, and Nuclear Engineering and the Department of Materials Science and Engineering in the Rensselaer School of Engineering. “While a similar effect has been observed for carbon nanotubes, this is the first such study with graphene. The energy-harvesting capability of graphene was at least an order of magnitude superior to nanotubes. Moreover, the advantage of the flexible graphene sheets is that they can be wrapped around almost any geometry or shape.”

Details of the study, titled “Harvesting Energy from Water Flow over Graphene,” were published online last week by the journal Nano Letters. The study also will appear in a future print edition of the journal. The online version may be viewed at: http://pubs.acs.org/doi/full/10.1021/nl2011559

It is the first research paper to result from the $1 million grant awarded to Koratkar’s group in March 2010 by the Advanced Energy Consortium.

Hydrocarbon exploration is an expensive process that involves drilling deep down in the earth to detect the presence of oil or natural gas. Koratkar said oil and gas companies would like to augment this process by sending out large numbers of microscale or nanoscale sensors into new and existing drill wells. These sensors would travel laterally through the earth, carried by pressurized water pumped into these wells, and into the network of cracks that exist underneath the earth’s surface. Oil companies would no longer be limited to vertical exploration, and the data collected from the sensors would arm these firms with more information for deciding the best locations to drill.

The team’s discovery is a potential solution for a key challenge to realizing these autonomous microsensors, which will need to be self-powered. By covering the microsensors with a graphene coating, the sensors can harvest energy as water flows over the coating.

“We’ll wrap the graphene coating around the sensor, and it will act as a ‘smart skin’ that serves as a nanofluidic power generator,” Koratkar said.

Graphene is a single-atom-thick sheet of carbon atoms, which are arranged like a chain-link fence. For this study, Koratkar’s team used graphene that was grown by chemical vapor deposition on a copper substrate and transferred onto silicon dioxide. The researchers created an experimental water tunnel apparatus to test the generation of power as water flows over the graphene at different velocities.

Along with physically demonstrating the ability to generate 85 nanowatts of power from a small fragment of graphene, the researchers used molecular dynamics simulations to better understand the physics of this phenomenon. They discovered that chloride ions present in the water stick to the surface of graphene. As water flows over the graphene, the friction force between the water flow and the layer of adsorbed chloride ions causes the ions to drift along the flow direction. The motion of these ions drags the free charges present in graphene along the flow direction – creating an internal current.

This means the graphene coating requires ions to be present in water to function properly. Therefore, oil exploration companies would need to add chemicals to the water that is injected into the well. Koratkar said this is an easy, inexpensive solution.

For the study, Koratkar’s team also tested the energy harvested from water flowing over a film of carbon nanotubes. However, the energy generation and performance was far inferior to those attained using graphene, he said.

Looking at potential future applications of this new technology, Koratkar said he could envision self-powered microrobots or microsubmarines. Another possibility is harvesting power from a graphene coating on the underside of a boat.

For more information on Koratkar’s research at Rensselaer, visit:

• Using Nanotubes To Detect and Repair Cracks in Aircraft Wings, Other Structureshttp://news.rpi.edu/update.do?artcenterkey=2321