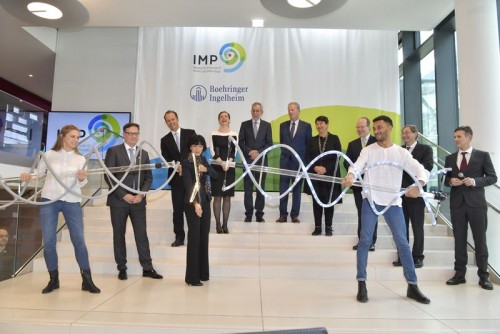 Newswise — The Research Institute of Molecular Pathology (IMP) opens its new building: IMP sponsor Boehringer Ingelheim has constructed a new flagship for the Vienna Biocenter, the Life Science cluster in Vienna, with an investment of 52 million euros. Representatives from politics, industry and science celebrated the opening.

The building was officially opened on March 1st after a construction period of one and a half years. Two hundred scientists from almost 40 countries will continue their groundbreaking research here. “Basic research is the most important driving force for future innovation and solution strategies, in particular in the field of medical advancement,” explained Jan-Michael Peters, Scientific Director at IMP.

New building provides high flexibility for modern researchThe building’s extraordinary architecture and well thought-out use of technology will make it a challenger for such major research locations as London and Boston: functionality and design were combined very smartly to meet the needs of a modern research institute. A flexible floor layout allows for the smooth adaptation to new methods and future work processes.

“March 1st, 2017, is a milestone in the history of the Research Institute of Molecular Pathology, which we – Boehringer Ingelheim – founded more than 30 years ago. At present, it is among the most prestigious research institutions worldwide,” said Philipp von Lattorff, Country Managing Director of the Boehringer Ingelheim RCV.

Scientist Charpentier cuts four meter-long DNA double helixIn lieu of a red ribbon, well-known scientist Emanuelle Charpentier cut a four meter-long, glowing DNA double helix, as a tribute to her revolutionary discovery of the CRISPR-Cas9-System: she laid the foundations for the development of a molecular-biological method to edit genomes very precisely during her work at the Vienna Biocenter.

“I have witnessed the development of the Vienna Biocenter directly as University Coordinator of the City of Vienna. Today, Vienna is one of Europe’s most dynamic locations for basic science in the field of molecular biology – and the IMP has made a major contribution to this,” President Van der Bellen said.

“The IMP is an important stimulant for intellectual and business-related developments in Austria. We defined the target of expanding Austria into a globally leading location in Life Sciences and pharmacology in the government’s Life Science Strategy. The new IMP building is a crucial milestone in this plan,” said Vice-Chancellor Reinhold Mitterlehner.

“The IMP can be seen as the nucleus of the Vienna Biocenter. It has tremendous significance for Vienna as a science and business location. I wish the IMP further success, also in the interests of Vienna, and hope that it will continue to produce strong impulses for the biotech scene,” said Vienna’s Councilor Renate Brauner.

The IMP has left its mark on biomedical basic research worldwide with its findings on basic, biological processes. “The scientists’ motivation is fueled by curiosity. This driving force - to get to the bottom of things without a specified reason - is what characterizes human nature and makes science a cultural asset just like the arts, literature and philosophy,” said IMP Director Peters. “It is a privilege to conduct research in intellectual freedom and at the highest possible level,” added Harald Isemann, IMP Executive Director. “Boehringer Ingelheim makes this possible as the largest private sponsor of basic research in Austria.”

Boehringer Ingelheim supports the IMP with around 20 million euros in funding every year, but does not influence the institute’s projects and research fields. The pharmaceutical company invested 52 million euros in the new building. “The new building has already had a good start - now, we look forward to more groundbreaking discoveries,” said Lattorff.

New IMP building helps institutes at the Vienna Biocenter get closer to each otherThe new IMP building has also closed the gap to other leading research institutions around the world that will leave their mark on molecular biology for decades to come from an architectural perspective. Communications, flexibility and sustainability were the leading ideas behind the planning by ATP architekten ingenieure. The adjacent institutes at the Vienna Biocenter, which are partially connected to the new IMP building via a glass bridge, will also benefit from the cutting-edge infrastructure.

The new building not only helps express the IMP’s desire for excellence, but also strengthens the position of the Vienna Biocenter as a top location in Life Sciences in Europe.

About IMPThe Research Institute of Molecular Pathology (IMP) in Vienna is a basic biomedical research institute largely sponsored by Boehringer Ingelheim. With over 200 scientists from 40 nations, the IMP is committed to scientific discovery of fundamental molecular and cellular mechanisms underlying complex biological phenomena. Research areas include cell and molecular biology, neurobiology, disease mechanisms and computational biology.