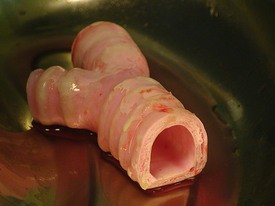 Dr. Macchiarini, in collaboration with his research ream, recently published a paper detailing the first of the two surgeries—titled “Tracheobronchial transplantation with a stem-cell-seeded bioartificial nanocomposite: a proof-of-concept study”—in the British medical journal The Lancet.

Newswise — Tracheal tumors can be surgically removed, but most are too large for the surgery to be successful by the time they are discovered. Therefore, new therapeutic options are needed. Even in patients with operable tumors, the proportion of complete tumor resection is less than 60%. This outcome would be greatly improved if a trachea substitute with similar anatomical, physiological and biomechanical properties of the patient’s original trachea were available. A team led by Paolo Macchiarini, MD, PhD, of Karolinska University Hospital and Karolinska Institutet in Stockholm, Sweden, successfully performed this type of procedure on a 36-year-old male patient with tracheal cancer in June 2011.

In November, the Macchiarini team repeated its success: A 30-year-old Baltimore engineer with a cancerous tumor on his trachea, who had been told by American doctors that the tumor was too large to be excised completely, traveled to Sweden for the identical surgery.

Dr. Macchiarini, in collaboration with his research ream, recently published a paper detailing the first of the two surgeries—titled “Tracheobronchial transplantation with a stem-cell-seeded bioartificial nanocomposite: a proof-of-concept study”—in the British medical journal The Lancet.

In addition to Dr. Macchiarini, the international team involved Professor Alexander Seifalian from University College London who designed and built the nanocomposite tracheal scaffold, and Harvard Bioscience of Holliston, Massachusetts, which produced a specifically designed, shoebox-sized bioreactor used to seed the scaffold with the patient’s own stem cells. The cells were grown on the scaffold inside the bioreactor for approximately two days; the scaffold was rotated while its surface was soaked with stem cells obtained from a bone marrow biopsy from the patient’s hip. The patient’s stem cells settled into the pores within the scaffold and began to grow into each other, slowly transforming from individual cells into genuine tissue. A few days after the implantation of the new trachea, the man’s own blood vessels actually started to grow into it, transforming the new organ into a part of his own body. Because the cells used to regenerate the trachea were the patient’s own, there was no rejection of the transplant and the patient is not taking immunosuppressive drugs.

The patient had been suffering from late-stage tracheal cancer. Despite maximum treatment with radiation therapy, the tumor had reached approximately 6 cm in length and was extending to the main bronchus. It was progressing and almost completely blocked the trachea. Since no suitable donor windpipe was available, the transplantation of the synthetic tissue-engineered trachea was performed as the last possible option for the patient, referred by Professor Tomas Gudbjartsson of Landspitali University Hospital (Iceland) who was also part of the surgical team.

The successful transplantation of tissue-engineered synthetic organs, referred to as regenerative medicine, could open new and very promising therapeutic possibilities for the thousands of patients who suffer from tracheal cancer or other conditions that destroy, block or constrict the airway. This procedure is still experimental and will need to be sanctioned by the U.S. Food and Drug Administrations for the more than 100,000 Americans who are actively waiting for organ transplants to benefit from it. “[A] tailor-made synthetic tracheal scaffold is an urgent clinical need,” the authors write.

“Transplantations of tissue-engineered windpipes—and potentially other tubular organs like esophagus, blood vessels and ureters—with synthetic scaffolds in combination with the patient’s own stem cells, as a standard procedure, means that patients would not have to wait for a suitable donor organ,” said David Green, President of Harvard Bioscience, which produced the bioreactor. “This would be a substantial benefit for patients since they could benefit from earlier surgery and have a greater chance of cure. In addition to treating adult patients, tissue-engineered synthetic trachea transplants would, not least, be of great value for children, since the availability of donor tracheas is much lower than for adult patients.”