New President of Association of Black Cardiologists is Icilma Fergus, MD, of The Mount Sinai Hospital 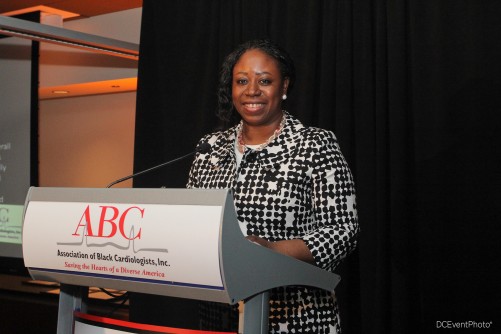 Dr. Icilma Fergus, the new President of the Association of Black Cardiologists (ABC) is the Director of Cardiovascular Disparities at Mount Sinai Heart at The Mount Sinai Hospital.

Newswise — The new President of the Association of Black Cardiologists (ABC) is Icilma V. Fergus, MD, Director of the Cardiovascular Disparities at Mount Sinai Heart at The Mount Sinai Hospital.

“I am pleased to announce that Dr. Icilma Fergus has been selected as the 15th President in the 40-year history of the organization,” said Ola Akinboboye MD, past President of the Association of Black Cardiologists who is Associate Professor of Clinical Medicine at Weill Cornell Medical College of Cornell University. “We are confident Dr. Fergus will be an outstanding president and the ABC will thrive under her governance.”

In her new role as the new President of ABC, Dr. Fergus will work with the Board of Directors, committees and members of ABC in the business and affairs of the organization and serve as its chief medical spokesperson and adhere to ABC’s mission. Dr. Fergus was selected unanimously by ABC’s membership and Board of Directors for her unwavering commitment to ABC’s mission of decreasing health care disparities in cardiovascular medicine. Previously, Dr. Fergus served on the Board of ABC for 6 years and in the roles of Secretary and Chair of Community Programs. “I am excited to start in my new role as President of ABC to broaden our organization’s impact and reach with the goal of ameliorating health disparities especially in cardiovascular disease,” says Dr. Fergus, the new President of ABC and Director of the Center for Cardiovascular Disparities at Mount Sinai Heart at The Mount Sinai Hospital. “My mission is to empower all people to take charge of their heart health, especially those at higher risk for cardiovascular events and stroke, to take the necessary daily steps to reduce their other individual risk factors to maintain their heart health.”

“I congratulate Dr. Fergus on her prominent selection as President and ABC during their 40th Anniversary,” says Valentin Fuster, MD, PhD, Director of Mount Sinai Heart and Physician-in-Chief of The Mount Sinai Hospital. “As President, Dr. Fergus will have the opportunity to make an incredible mark and progress on the daily lives and cardiovascular health of those at higher risk for heart disease.” “We are very proud of Dr. Fergus and her selection for the prestigious role as President of the Association of Black Cardiologists,” says Jagat Narula, MD, PhD, Director of Operations of The Mount Sinai Heart Network, and Associate Dean of Global Health at Icahn School of Medicine at Mount Sinai. “Dr. Fergus’ passion, strong leadership, and track record of success for helping to reduce health disparities in New York City’s communities will now be transcended to have a national impact.”

The ABC has a diverse membership of 2,500 and is open to all persons or organizations interested in the care and treatment of patients with or at risk for cardiovascular diseases. The ABC adheres to the vision that all people, regardless of race, ethnicity or gender, should benefit equally from reduction in the frequency, duration and impact of cardiovascular diseases. Today, the ABC's public and private partnerships continue to increase its impact in communities across the nation.

Dr. Fergus serves as Director of Cardiovascular Disparities at Mount Sinai Heart at The Mount Sinai Hospital. In addition, she runs the Harlem Healthy Hearts program. Also, she is a member of the Senior Faculty in Medicine (Cardiology) at Icahn School of Medicine at Mount Sinai.

Dr. Fergus specializes in the prevention and treatment of cardiovascular disease. Her current research interests involve cardiovascular disparities, hypertension and diastolic dysfunction, as well as heart disease in women. Dr. Fergus has been an investigator in several clinical trials and authored numerous articles related to heart disease and congestive heart failure. She is also a co-author of the book entitled “Cardiovascular Disease in Ethnic Minorities.” She is a member of the American College of Cardiology, American Society of Hypertension, and a fellow of the American College of Cardiology. She is a prominent educator in the Harlem community and is a member of the Harlem Healthy Eating and Living Committee supported by the Harlem Chamber of Commerce as well as she sits on the Community Advisory Board of Touro College School of Medicine in Central Harlem.