11-Jul-2012 5:00 AM EDT, by University of North Carolina at Wilmington
favorite_border 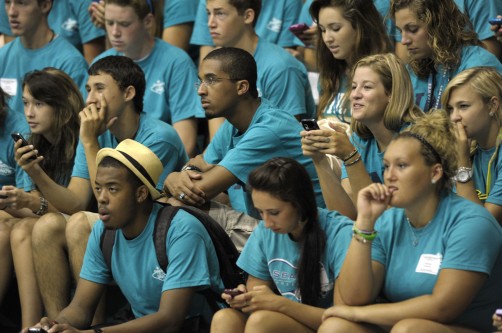 Students at the University of North Carolina Wilmington use their cell phones to post to social media sites and text during a basketball game.

Newswise — WILMINGTON, N.C. -- A new study conducted by associate professor Bruce McKinney at the University of North Carolina Wilmington shows Facebook users are not as narcissistic as once thought.

While previous studies such as Laura Buffardi and W. Keith Campbell’s 2008 paper in Personality and Social Psychology Bulletin showed a correlation between Facebook and narcissism, McKinney’s new study, Narcissism or Openness?: College Students’ Use of Facebook and Twitter found no relationship between Facebook usage sand narcissistic traits. Lynne Kelly and Robert L. Duran of The University of Hartford coauthored the study, which was recently published in the newest volume of Communication Research Reports.

The researchers focused on whether social networking sites like Facebook were promoting narcissism in college-aged users in a world where being constantly hunched over computers and smart phones is the norm.

McKinney, Kelly and Duran surveyed 233 college students to deduce how much time participants were spending on social media sites and whether their usage showed characteristics of narcissism or openness. Their findings showed that instead of using social media to inflate their ego, Facebook users log on to the site to share their lives with those in their friend circle similar to how they would share photos and stories with friends in person.

“We found that Facebook is ubiquitous,” said McKinney. He suggested, “Perhaps it is time to redefine narcissism and narcissistic traits so it includes social media usage.”

Although previous studies like the one conducted by Buffardi and Campbell showed Facebook and narcissism are linked, McKinney noted that, with the rise in popularity of social networking sites, the standard for narcissistic behavior might be evolving. He said considering the recent mainstreaming of social media usage, the 2008 report may be dated in documenting the behavior of those using social networking sites to post and share information. He noted that social media is now employed by not only individuals, but by businesses and private institutions and that this expansion paired with more pervasive use of social media may be changing the standards and purpose of the sites in the last five years.

McKinney explained, “We used to have phone booths for a reason -- for privacy. But with Facebook and social networking came sharing with larger groups of friends, which has become customary. We’ve become an individualistic culture,” he said. “It’s acceptable to say ‘Look at me!’ Now, it’s the social norm.”

McKinney’s study focused on the narcissistic traits exhibited by social media users rather than The Diagnostic and Statistical Manual of Mental Disorders (DSM) definition of Narcissistic Personality Disorder. He said he plans to expand his research on the topic in the future.

Despite Facebook’s shaky start in the public sector, McKinney says, “it’s not going anywhere. Facebook has become universal and a cultural norm in our new, individualistic society.” __

Narcissism or Openness?: College Students’ Use of Facebook and Twitter by Bruce McKinney, Lynne Kelly and Robert L. Duran in the May issue of Communication Research Reports, Volume 29, No. 2, April-June 2012, pp. 108-118