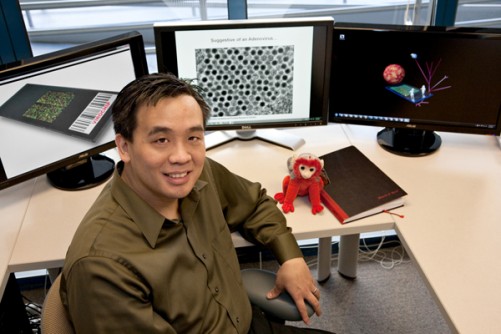 Newswise — A once-promising discovery linking prostate cancer to an obscure retrovirus derived from mice was the result of an inadvertent laboratory contamination, a forensic analysis of tissue samples and lab experiments – some dating back nearly a decade – has confirmed.

The connection, which scientists have questioned repeatedly over the last couple years, was first proposed more than six years ago, when the telltale signature of the virus, known as XMRV, was detected in genetic material derived from tissue samples taken from men with prostate cancer. Later studies failed to find the same signature, and researchers reported that while XMRV is a real, previously-undiscovered virus with interesting and useful properties, it is an infection of human prostate cancer cells in laboratories and not of prostate cancer patients. Now, an analysis by a team of scientists led by researchers from the University of California, San Francisco (UCSF), Cleveland Clinic and Abbott has uncovered the complete story behind this contamination. As described this week in the open-access journal PLOS ONE, the original association between XMRV and prostate cancer resulted from traces of XMRV that appear to have found their way into the prostate samples from other cells being handled in the same laboratory in 2003. These cells were also contaminated with the retrovirus. “Everything arose from this presumed contamination event,” said Charles Chiu, MD, PhD, an assistant professor of laboratory medicine at UCSF and director of the UCSF-Abbott Viral Diagnostics and Discovery Center. Anatomy of a ContaminationXMRV became a focus of research after its genetic signature was first found in prostate cancer samples in 2006. Similar studies in 2009 also detected the virus among samples taken from people with Chronic Fatigue Syndrome – though both discoveries have now been called into question. The original publication related to Chronic Fatigue Syndrome has since been retracted. When the prostate connection first emerged, there was a lot of excitement in the field, said Chiu, because of the lesson from human papillomavirus, a virus known to cause cervical cancer in women. HPV taught doctors that a cancer caused by a virus could be prevented by giving people a vaccine. For people with Chronic Fatigue Syndrome, the 2009 news offered hope because it promised new tests that could definitively diagnose their condition – and possibly lead to treatment with antiviral drugs that block XMRV. But the connection between the virus and both diseases began to unravel after a number of follow-up studies in several different laboratories failed to detect XMRV in tissue samples taken from men with prostate cancer and people with Chronic Fatigue Syndrome. Other studies added to the doubt by providing strong evidence that XMRV may have arisen simply from laboratory contamination. Working with the original groups that made the 2006 discovery, Chiu and his colleagues sought to definitively uncover how this contamination occurred. They first repeated the 2006 experiments in an unbiased way by using a variety of methods to examine new samples taken from a cohort of 39 men with prostate cancer. Failing to detect any trace of XMRV in these samples, they went back to the original material described in the 2006 paper and retraced its route through the laboratory step by step. Quickly, they determined that the virus detected in these samples was essentially identical in each – which suggested contamination rather than natural infection. Viruses like XMRV readily mutate, and if the different men who had donated prostate tissues had truly been infected, there likely would have been more than one strain present. Looking further, the scientists found that while the virus was present in genetic extracts made from the samples – and analyzed in the 2006 study – it was not present in the original prostate tissues themselves, samples of which were fixed in waxy paraffin immediately after they were first surgically removed. That discovery suggested that XMRV was introduced as a contaminant at some point when the tissue was being manipulated in the laboratory that processed the prostate tissue samples, prior to them being sent to UCSF for analysis.

Searching for a possible culprit, the team found a completely different cell line that was not used in the study but had been used in the same laboratory at the same time. They found frozen samples of these cells, called “LNCaP,” which had been packed away in a lab freezer since 2003. The virus was in these cells. Using a sophisticated new technique called mitochondrial RNA profiling, the researchers showed that these cells were indeed the source of the virus detected in the prostate samples.

But how did the LNCaP cells themselves become contaminated? Looking further, the scientists found that the source was another type of cell, called the 22Rv1 cell line, which was developed at Case Western Reserve University and is used extensively in prostate cancer research. Prior research by other scientists showed that this virus appears to have been created accidentally in the laboratory in the 1990s in a “recombination event” in which two viruses combined to form XMRV. This event occurred while scientists were working with mice and a prostate cancer tumor to make the 22Rv1 cell line. “These findings underscore the importance of rapidly evolving new technologies such as deep sequencing and a novel application of this technology, mitochondrial RNA profiling,” said John Hackett Jr., PhD, senior research fellow of Emerging Pathogens and Virus Discovery at Abbott. If these scientific tools were available when XMRV was first discovered, contamination would likely have been identified far sooner. The most important contribution of our study to the scientific community may well be the demonstration of how these technologies can be applied in future studies.” The whole affair is something of a cautionary tale, Chiu said. “This is basically the nature of science – fallible and not necessarily error-free, yet ultimately self-correcting.” “It’s been known for over a year that XMRV was the result of lab contamination. I couldn’t rest until we figured out how it happened. It felt like the right thing to do was to collaborate with Dr. Chiu and the others to get the answers,” said Robert Silverman, PhD, interim chair of Cancer Biology at the Cleveland Clinic and one of the authors of the original study. “I’m gratified that we finally got to the bottom of the story.” The article, “In-Depth Investigation of Archival and Prospectively Collected Samples Reveals No Evidence for XMRV Infection in Prostate Cancer,” by Deanna Lee, Jaydip Das Gupta, Christina Gaughan, Imke Steffen, Ning Tang, Ka-Cheung Luk, Xiaoxing Qiu, Anatoly Urisman, Nicole Fischer, Ross Molinaro, Miranda Broz, Gerald Schochetman, Eric A. Klein, Don Ganem, Joseph L. DeRisi, Graham Simmons, John Hackett Jr., Robert H. Silverman and Charles Y. Chiu, appears in the journal PLOS ONE on Sept. 18. See: http://dx.plos.org/10.1371/journal.ppat.1002924 In addition to UCSF, authors on this study are affiliated with the University of San Francisco, Cleveland Clinic, Blood Systems Research Institute in San Francisco, Abbott in Abbott Park, Ill., University Medical Center Hamburg-Eppendorf in Germany, Emory University School of Medicine in Atlanta, Novartis Institutes for Biomedical Research in Emeryville, Calif. This work was funded by the National Institutes of Health (grant #CA103943, #1R21HL109761, #R56-AI08953 and #R01-HL105704), the Charlotte Geyer Foundation, the Maltz Family Foundation, Abbott and the Howard Hughes Medical Institute.

Several authors on the study not affiliated with UCSF are included as inventors on one or more patent applications, which include either the Cleveland Clinic, Abbott Laboratories, or both. Abbott is the sole assignee of issued U.S. Patent No. 8,183,349 relating to XMRV.