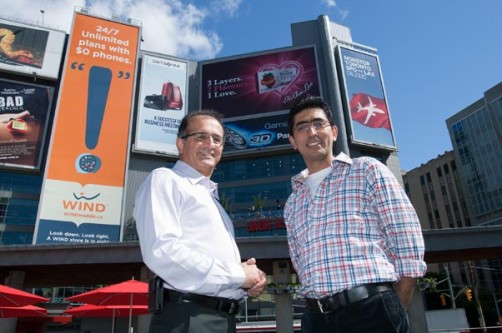 Newswise — TORONTO, June 28, 2011 --- A wallet full of loyalty and points cards is a common sight for many people. The results of a new study out of Ryerson University which examines the profitability of loyalty programs indicate that some companies may be better off not offering this type of customer incentive.

Saeed Zolfaghari, professor and director of the industrial engineering program at Ryerson University, and PhD candidate Amir Gandomi, co-authors of the study, discovered that despite the high rate of participation in loyalty programs there has been little analytical research to date. As a result, Zolfaghari and Gandomi developed a mathematical model that measures their effectiveness.

“Loyalty programs entice people to become, and remain, customers,” says Zolfaghari. “Our model demonstrates that if average customer satisfaction increases over time there is less incentive for a company to offer a loyalty program. Essentially, your customers are already happy with you.”

The finding may seem intuitive, Zolfaghari says, but up until now there hasn’t been a scientific way to verify it. The analytical model developed by Zolfaghari and Gandomi takes both the customers’ product valuations and their satisfaction levels into account. The objective of the model is to maximize a company’s revenues based on two criteria: the price of a product sold in two separate periods, and the amount of the loyalty reward offered. Customers who made a purchase in both buying periods were offered a reward in the form of a discount on the price in the second period. A common example of this kind of discount is a coupon offering 15 per cent off the next purchase made within the following two months.

“In our model, we also found that as the number of customers who intended to make a purchase in the second period increased, a company had to increase their price in the first period to offset the discount offered on subsequent purchases. To make up for increased reward costs in the future, you need to increase your prices in the present,” says Zolfaghari.

Zolfaghari cautions that more work is needed before companies can incorporate the model in their own decision-making processes. “This is the first step in the right direction. Going forward, we will eliminate some assumptions and add new attributes to make the model more realistic. But eventually, a company could adopt our model to design new loyalty programs or improve the profitability of existing ones.”

A Stochastic Model on the Profitability of Loyalty Programs was published online in April in the journal Computers & Industrial Engineering and will also be published in a print edition of the journal later this year. An earlier paper by the researchers based on the same study was named a finalist for best paper at the annual conference of the Institute of Industrial Engineers held last month in Reno, Nevada.

Ryerson University is Canada's leader in innovative, career-oriented education and a university clearly on the move. With a mission to serve societal need, and a long-standing commitment to engaging its community, Ryerson offers more than 100 undergraduate and graduate programs. Distinctly urban, culturally diverse and inclusive, the university is home to 28,000 students, including 2,000 master's and PhD students, nearly 2,700 faculty and staff, and more than 130,000 alumni worldwide. Research at Ryerson is on a trajectory of success and growth: externally funded research has doubled in the past four years. The G. Raymond Chang School of Continuing Education is Canada's leading provider of university-based adult education. For more information, visit www.ryerson.ca