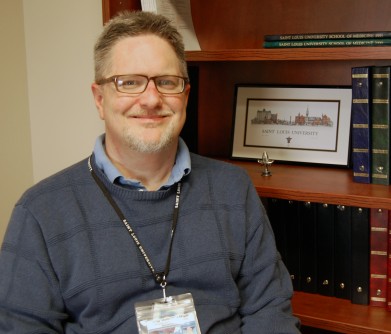 Jeffrey Scherrer, Ph.D., is an associate professor of family and community medicine at Saint Louis University.

Newswise — ST. LOUIS – After finding a link between chronic use of prescription-based painkillers and increase in risk of depression, Saint Louis University researcher Jeffrey Scherrer, Ph.D., has received a $391,706 NIH grant to further investigate the pattern in a wider patient base, and study the type of opioids that lead to depression.

In the previous study that was published in the Journal of General Internal Medicine last year, Scherrer, associate professor of family and community medicine at Saint Louis University, and his team analyzed medical records of nearly 50,000 veterans who had no history of opioid use or depression, and were subsequently prescribed opioid analgesics. Scherrer found that the longer a patient takes these painkillers, the greater is their risk of developing depression.

For this project, Scherrer and his team will study the medical records of a million patients – 500,000 patients who receive care through the Department of Veteran Affairs (VA) and 500,000 patients in the private sector – who take opioid prescriptions for pain. He will examine their risks of developing new depression, having a depression relapse and the risk that their depression will become resistant to treatment.

“Our main approach in this study is to establish strong evidence that opioid use causes depression, by first applying advanced methods to factor out the already known role of pain in depression,” said Scherrer. “We want to determine if findings differ in a non-VA patient population and, if so, identify patient characteristics that explain differences.”

Opioid analgesics are the most frequently prescribed medication in the US with the total number of prescriptions exceeding 130 million annually, and they can have adverse effects on physical and emotional functioning, Scherrer said, citing previous studies.

“These numbers represent a 10-fold increase in opioid use since 1990, a period during which the number of outpatient visits for conditions associated with chronic pain remained relatively stable,” he said.

“Our preliminary studies reveal patients using opioids for more than 180 days are at increased risk of depression, compared to those who use them for less than 90 days. Also, high daily dose appears to be equally important in creating a risk for new onset depression he said.”

Scherrer also points to the possibility of some patients getting access to opioids outside of the VA.

“We will be using data from the State of Washington’s prescription monitoring program that will allow us to see how many patients had access to opioids outside of the VA,” he said. “We have no idea right now, but to accurately measure the total exposure to opioids, we must first determine if and how much opioid is being obtained outside of and in addition to opioid prescriptions obtained in the VA.”

He said it’s important to understand the previously unknown consequence of chronic opioid use, which is mostly focused on overdose and addiction.

“Results from this study will have an immediate impact on determining the previously unmeasured public health burden of depression, relapse and treatment resistant depression that may be occurring due to an exponential increase in opioid prescribing in the United States,” he said.